No. 1 Softball to Begin Road Trip at State 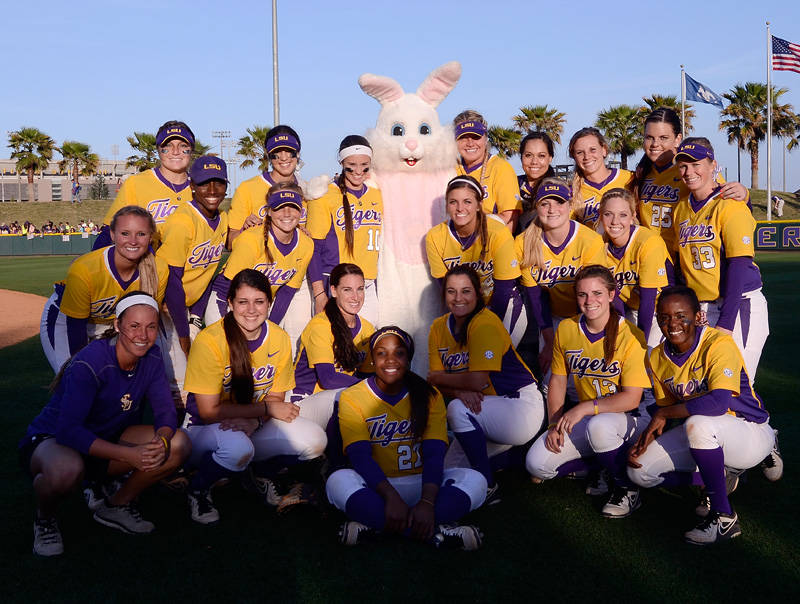 BATON ROUGE, La. – The No. 2 LSU softball team opens its longest road trip of the season on Wednesday evening, taking on the Mississippi State Bulldogs at 6 p.m. at the MSU Softball Field in Starkville.

Wednesday’s game will be streamed online on SEC Network+ through WatchESPN, with continuous updates through the team’s social media pages on Facebook and Twitter. Radio coverage on ESPN 104.5/9 locally in Baton Rouge will pick back up later on this week.

Coming off of another quality weekend performance, the Tigers hit the road for its longest stretch of games away from Tiger Park all season, beginning with Mississippi State on Wednesday, before continuing the climb toward Knoxville for a three-game SEC series against Tennessee this weekend. The last pair of games will be a midweek doubleheader next Wednesday against McNeese State in Lake Charles.

“I think last weekend was a big confidence boost for us, and something I think we needed as we begin this trip against some very tough opponents,” head coach Beth Torina said. “Mississippi State has played a tough schedule with a lot of Top 25 opponents already, so they are very battle-tested and will be another quality challenge for our team.”

With Spring Break beginning for LSU students toward the end of last week, the softball wouldn’t need a getaway from the friendly confines of Tiger Park, as the squad forged into a key stretch of the season by earning a sweep of another SEC opponent, this time coming by way of the Ole Miss Rebels by a combined score of 21-4 over the course of three games. The wins helped LSU improve to 36-3 on the year and 9-3 in the SEC, sitting in sole possession of second place in the league standings.

With four weeks remaining in the regular season, LSU will look to remain focused coming down the backstretch of the 2015 campaign, beginning tomorrow with a Mississippi State team that has won five-straight just as the Tigers have after sweeping Arkansas in Fayetteville over the weekend. Although considered a non-conference game between two league members, the contest will continue to strengthen the two sides’ overall resume, with LSU coming in with the second-best RPI in the country while MSU clocks in a 22.

After such a strong week at the plate, sophomore outfielder Bailey Landry took home SEC Co-Player of the Week honors for the first time in her career, hitting nearly .700 in four games last week where LSU went 4-0. Hitting a career-best .475 in just her second year on the team, Landry is second on the team in total hits, doubles, triples and average, while being third in on-base percentage and stolen bases.

Landry wasn’t the only Tiger to take home some weekly honors as Carley Hoover was named the SEC Freshman of the Week for the second time this year, while also earning the LSWA Pitcher of the Week award for the first time. Her two wins last week were about as impressive as you could expect for the Clemson, South Carolina, native, racking up 18 strikeouts in 11.1 innings of work, allowing just one run on a .125 opponent batting average to improve to 10-2 and up her team-leading strikeout total to 97.

With a host of season records falling, Bianka Bell and Sahvanna Jaquish are poised to break more over the course of the rest of the season beginning with the home run race which Jaquish leads with 14 and Bell two behind at 12.

With her 16 doubles to lead the squad, Bell is two away from joining the top five single-season leaders all-time in the category, while her 20 multi-hit outings is just on the outside of the top-ten, with five more putting her among some of the best in LSU history.

Baylee Corbello leads a pitching staff with the lowest ERA in the league and one of the lowest in the nation at 1.11, as she along with Hoover and Allie Walljasper all earned wins and continue to produce with Kelsee Selman one of the most formidable pitching staffs in the country with a group average of 1.37. Opposing teams are batting just .190 against the four, with 285 strikeouts to just 62 walks.