No. 6 Men's Golf Preps for SEC's at Aggie Invite 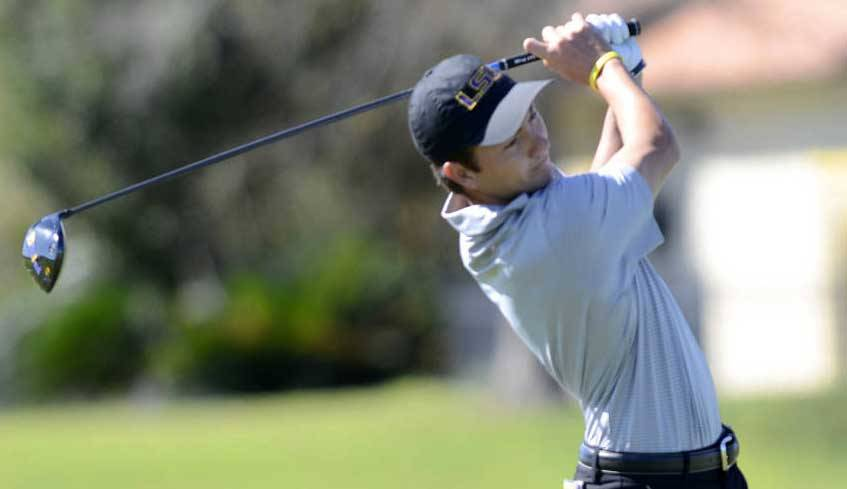 BATON ROUGE – The No. 6-ranked LSU Tigers look to carry their momentum from a victory at the Talis Park Challenge and runner-up finish at the Valspar Invitational at Floridian into their regular-season finale as they will tee off as defending champions at Texas A&M’s Aggie Invitational beginning Saturday at Traditions Golf Club in Bryan, Texas.

The two-day, 54-hole Aggie Invitational features two rounds on Saturday with tee times beginning at 7:30 a.m. CT followed by the final round on Sunday with tee times also slated to start at 7:30 a.m. CT. Traditions Golf Club will play to a par 72 and 7,146 yards for the championship with an awards ceremony scheduled for approximately 2 p.m. CT following Sunday’s final round of the event.

The LSU Tigers and tournament host Texas A&M Aggies were crowned co-champions of the event a year ago with 54-hole scores of 35-over par 899, finishing four shots clear of Texas Tech (903) in third place.

The Tigers are among two top-10, four top-25 and seven top-50 teams from the latest Golfweek Men’s Golf Collegiate Rankings in the 12-team field at the Aggie Invitational this weekend as they are joined by the likes of No. 10 Texas Tech, No. 16 Oklahoma, No. 21 California, No. 32 Arkansas, No. 41 Texas A&M and No. 47 Michigan. Kent State, New Mexico State, North Texas, Princeton and Texas-San Antonio round out the field.

LSU is paired with Texas A&M and Texas Tech during Saturday’s action and will tee off from the first tee to start the first round. Golfstat will provide live scoring throughout the tournament at http://golfstat.com.

The squad heads to the Aggie Invitational this weekend riding a wave of momentum in the wake of securing their third team championship of the 2014-15 season at the Talis Park Challenge in Naples on March 16 and a runner-up finish at the Valspar Invitational at Floridian in Palm City on March 24 to highlight a two-week tour of Florida. The Tigers wrapped up their last two events with scores of 14-under par 838 at Talis Park Golf Club and 12-under par 840 at Floridian Golf Club for a cumulative 26-under par in their last two tournaments.

Two Tigers return to the lineup that brought home the team title at the Aggie Invitational last spring as senior All-Americans Stewart Jolly and Ben Taylor look to lead the squad again this weekend. Taylor posted 9-over par 225 to tie for 16th place at the Aggie Invitational a year ago as the top returning Tiger in the event, while Jolly tied for 30th place with a final score of 15-over par 231 for the tournament.

The No. 77-ranked player nationally by Golfweek, Taylor is LSU’s second-leading scorer this season with a two-year low of 71.67 strokes per round in seven tournament starts that includes a pair of top-five finishes and a trio of top-10 finishes in 2014-15. Taylor is coming off a tie for eighth place at the Talis Park Challenge and a tie for 11th place at the Valspar Invitational at Floridian in his last two appearances with the Tigers.

Jolly, who is the No. 76-ranked player nationally by Golfweek, follows with a 72.14 scoring average with two top-five finishes on his resume, including his victory at the Golfweek Conference Challenge in the fall.

Joining Jolly and Taylor in making his eighth tournament appearance of the season this weekend is junior standout Zach Wright, who has finished among the Top 20 of the leaderboard in six of his previous seven starts. Wright, who sports a 72.10 scoring average this season, has recorded one top-10 finish this spring when he tied for 10th place as the top LSU Tiger at the Querencia Cabo Collegiate a month ago.

The Tigers have also been led by a pair of sophomores in recent weeks as Brandon Pierce and Eric Ricard return to the lineup looking to help the Tigers retain the team title they won at the Aggie Invitational in 2014.

Pierce has been on fire since cracking the lineup for the first time in LSU’s spring season opener at The Prestige at PGA West as he is the team’s leading scorer with a 70.58 scoring average in four tournaments this year. That includes a tie for sixth place in his last start at the Valspar Invitational at Floridian two weeks ago, highlighting a spring season that features two top-10 and four top-20 finishes in 2015. Ricard has posted an average of 71.79 strokes per round as the only Tiger to appear in all eight tournaments in 2014-15, including a team-leading four top-10 finishes on the year.

After wrapping up their regular season at Texas A&M’s Aggie Invitational this weekend, the Tigers will kick off the championship season from April 17-19 with a return to the SEC Men’s Golf Championships that is set to be held at Sea Island Golf Club’s Seaside Course in St. Simons Island, Georgia, once again. LSU was the SEC runner-up a year ago with a final score of 18-under par 822 during the 2014 championship.