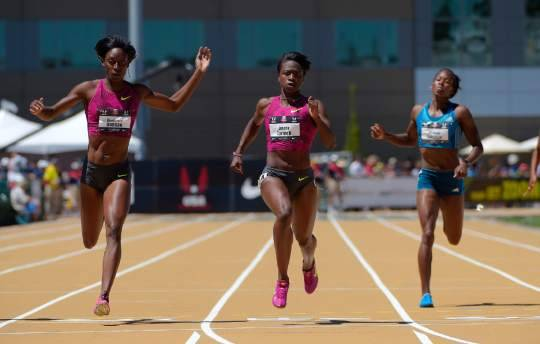 SACRAMENTO, Calif. – Former Lady Tiger teammates Kimberlyn Duncan and Cassandra Tate climbed the medal podium in Sunday’s finale at the 2014 USA Outdoor Track & Field Championships as Duncan sprinted to the silver medal in the 200-meter dash and Tate raced to a personal best to win the bronze medal in the 400-meter hurdles at Hornet Stadium.

Duncan lined up as the reigning USA Outdoor Champion in the women’s 200-meter dash after clocking a career-best wind-aided time of 21.80 seconds to take down Allyson Felix a season ago.

Duncan, a six-time NCAA Champion in the 200-meter dash during her collegiate career at LSU, advanced to the final after winning her semifinal heat with a run of 22.63 (+1.8) earlier during Sunday’s competition.

While Duncan claimed her second medal in as many seasons at the USA Outdoor Championships, Tate stepped onto the medal podium during the meet for the first time in her career as she smashed her personal best with a run of 54.70 in the final of the women’s 400-meter hurdles to take home the bronze medal.

After advancing to Sunday’s final with qualifying times of 56.28 in the first round and 55.21 in the semifinal round, Tate followed gold medalist Kori Carter (53.84) and silver medalist Georganne Moline (54.00) across the finish line to win her first career medal at the USA Outdoor Championships. She broke her previous personal best of 55.22 set in winning the 2012 NCAA Outdoor Championship in the event.

Also running a personal best in Sunday’s championship finals was former Lady Tiger All-American Charlene Lipsey, who clocked 2 minutes, 1.02 seconds to claim a sixth-place finish in the final of the women’s 800-meter run. She was followed across the finish line by another former Lady Tiger standout as LaTavia Thomas finished in eighth place in the final with a time of 2:02.46.

In other action, Tiger junior Aaron Ernest finished in 12th place overall in the semifinal round of the men’s 200-meter dash after crossing the finish line with his time of 20.67 (+3.7) for seventh place in the first heat.

In all, LSU’s athletes won four medals at the 2014 USA Outdoor Track & Field Championships this weekend after senior All-American Lynnika Pitts was the first to win the bronze medal in the women’s triple jump with a career-best wind-aided mark of 44 feet, 6 ¼ inches on Thursday and Lady Tiger great Lolo Jones won the bronze medal in the women’s 100-meter hurdles on Saturday night.