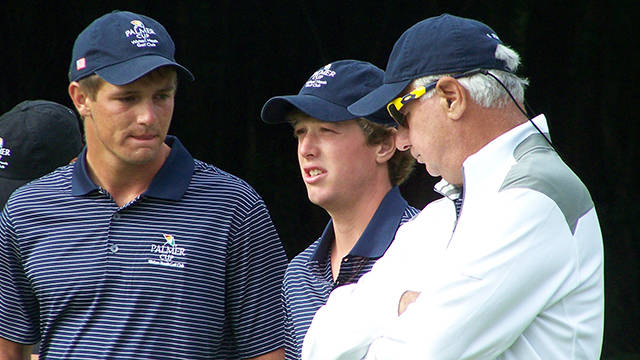 SURREY, England – LSU’s junior All-American Stewart Jolly wrapped up Thursday’s morning foursomes with a victory in the final match before dropping his four-ball match in the afternoon as the United States ended the day facing a narrow 5.5-4.5 deficit to the Europeans at the 2014 Palmer Cup being held this weekend at Walton Heath Golf Club.

Jolly and SMU’s Bryson Dechambeau evened the score at 2.5-2.5 following the morning foursomes as they scored a 1-up victory over Scotland’s duo of Jack McDonald and James Ross in the final match.

The Americans actually faced an early 2-hole deficit after conceding the first hole and losing the fourth hole in the foursome match featuring an alternating-shot format. Jolly and Dechambeau then reeled off their run of five-straight holes won to take a 3-up advantage in the match at the turn. They saw their lead cut to 1-up as the Scotsmen battled back  with wins at holes No. 12 and No. 15, but closed out the match with three pars in a row down the stretch for the 1-up victory to level the team score.

Jolly again faced McDonald and Ross in the afternoon four-ball session as he was paired with Oklahoma State All-American Wyndham Clark. Jolly and Clark raced out to a fast start by winning the first hole and pushed it to a 2-up advantage in the afternoon match with a birdie at the 12th hole at Walton Heath Golf Club.

McDonald and Ross stormed back in a big way by making birdie at No. 13, birdie at No. 14, eagle at No. 15 and birdie at No. 16 to turn the match on its head and take a 2-up lead themselves with just two holes to play. It ended 3&1 in favor of the Europeans when they made par and Jolly and Clark made bogey at the 17th hole to close out the match.

Jolly will go up against Ross for the third-straight match as they face off once again in the first round of singles matches to highlight Friday’s action at the 2014 Palmer Cup. Ten singles matches are on tap Friday with Jolly and Ross teeing off in the sixth match of the day at 3:50 a.m. CT. Tee times are scheduled to begin at 3 a.m. CT and will run through 4:30 a.m. CT on Friday morning.