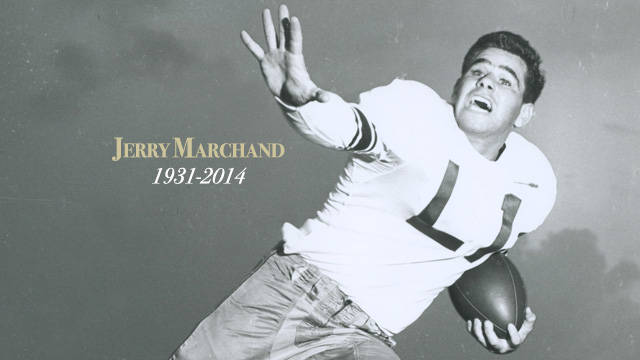 BATON ROUGE – Jerry Marchand, a two-sport standout and a member of the LSU Athletics Hall of Fame, passed away on Friday, June 20, at the age of 83.

Marchand was a two-year letterwinner at fullback for the Tigers in football in the early 1950s and he was also a standout catcher for the LSU baseball team in 1952 and 1953. Marchand was inducted into the LSU Athletics Hall of Fame in 1954.

On the gridiron, Marchand ended his career ranked No. 3 on the school’s all-time scoring list with 15 touchdowns and 90 points. At the time, he was just the fourth player in LSU history to go over the 1,000-yard career rushing mark, finishing with 1,027 yards on 213 carries. He was a third-team All-SEC selection at running back in 1953.

As a senior in 1953, Marchand earned most valuable player honors for the Tigers after leading LSU in rushing with 696 yards on 137 carries. At the time, the 696 yards ranked as the third-highest single-season total in school history.

Marchand’s top effort in 1953 came in a 32-13 win over Tulane and he rushed for 99 yards and a career-best three touchdowns in what was his final game with the Tigers.

In 1952, Marchand helped the Tigers to a 5-3-3 overall mark with 332 yards rushing and seven touchdowns. He capped his junior season with 115 yards, including a 54-yard touchdown run, in a 16-0 win over Tulane. He also scored LSU’s only points in a 6-6 tie against 14th-ranked Georgia that year.

Following his senior season with the Tigers in 1953, Marchand was invited to play in both the Senior Bowl and the Blue-Gray Classic. He was named the most valuable player of the Blue-Gray game.

Marchand was also one of four catchers named to the All-Alex Box Stadium “Foundation Era” Team, which honored those who played for the Tigers from 1938-83.

As a result of his passion of hunting and fishing, Jerry was a long-time supporter of the Coastal Conservation Association and Ducks Unlimited.

Visitation will be held at Rabenhorst Funeral Home downtown. 825 Government Street, Monday June 23 from 5 to 8 pm. Visitation will resume on Tuesday, June 24 from 10 am to 1 pm at St. Aloysius Catholic Church, 2021 Stuart Avenue. A memorial mass will follow.