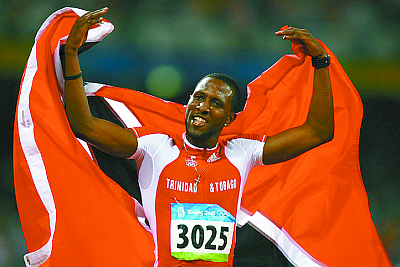 BATON ROUGE – LSU Tiger alum and three-time Olympic silver medalist Richard Thompson is the Sprint King in Trinidad & Tobago once again after smashing his own national record in the 100-meter dash with a world-leading run of 9.82 seconds this outdoor season at the Sagicor National Championships held this past weekend in Port-of-Spain, Trinidad.

Thompson was crowned Trinidad & Tobago’s 100-meter champion for the fourth time in his athletics career as he also won three-straight titles at the Sagicor Championships from 2009-11.

While lining up in lane No. 3, Thompson fired out of the blocks and took control of the race early, beating the rest of the field to the finish line by nearly two tenths of a second. He dethroned Trinidad & Tobago’s two-time defending 100-meter champion Keston Bledman, who took the silver medal in Saturday’s final with a run of 10.00 at Port-of-Spain’s Hasely Crawford Stadium.

Thompson clocked his fastest 100 meters since winning the Sagicor title during the 2011 season when he last set Trinidad & Tobago’s national record of 9.85. His personal best and seasonal best of 9.82 (+1.7) smashed the previous 2014 world-leading time of 9.86 set by American sprint star Justin Gatlin in Ostrava, Czech Republic, just one week ago on June 17.

The Baton Rouge-based sprinter continues to train on the same track at LSU’s Bernie Moore Track Stadium that made him one of the NCAA’s elite sprinters when he captured four NCAA titles, five SEC titles and eight All-America honors during his four-year collegiate career from 2005-08. Thompson has since gone on to international stardom as a three-time Olympic silver medalist, winning silver medals in the 100 meters and 4×100-meter relay in Beijing in 2008 and winning a second silver medal in the sprint relay in London in 2012.

He owns the distinction as being the most decorated Olympian in the history of LSU Athletics – regardless of sport – with his three Olympic medals as one of the world’s preeminent sprinters in recent history.

There is no doubt that Thompson is returning to the form that earned him a spot in the Olympic final in the 100 meters in both 2008 and 2012 as he has his sights set on returning to the IAAF World Championships to be held in Beijing, China, before making a run at a third Olympic Games in Rio de Janeiro, Brazil, just two short years from now in 2016.

In other action at the Sagicor National Open Track & Field Championships this past weekend, former Tiger All-American Kyron Blaise won the men’s long jump title with a winning mark of 23 feet, 10 ¾ inches, and LSU’s former middle distance All-American Jamaal James scored the silver medal in the men’s 800 meters with a run of 1 minute, 48.57 seconds in the final during the competition.