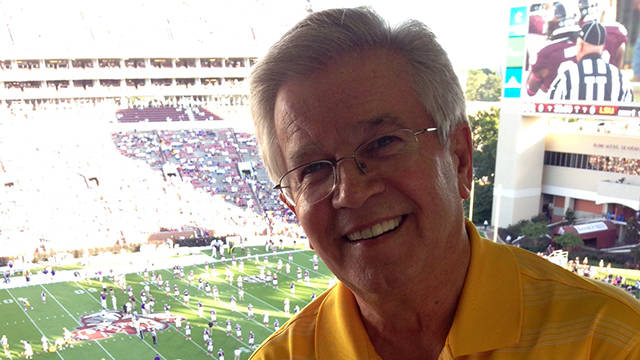 The convention was part of the annual Louisiana Sports Hall of Fame weekend in the city in which 11 new members were added included three with LSU ties – Moon Ducote, Pete Boudreaux and Alan Faneca.

Associate AD/SID Michael Bonnette and Senior Associate SID Kent Lowe had a rare tie for the top media guide division for bowl division schools that covered football and basketball. Of Bonnette’s football guide and Lowe’s basketball guide, the judge said:  “These two guides match each other stride for stride. One of the best parts in each guide is the detailed history and traditions that makes LSU unique in football and basketball. It’s invaluable info that gives visiting writers instant perspective and background.”

Bonnette would also take third in “Best Fact Sheet” while Lowe finished second in Division IV Media Guide for the 2013-14 LSU Women’s Golf Guide. Lowe also had two of his “Lowedown” columns during 2013 score in the web site categories for the first time in the main state writing contest.  Lowe’s column regarding the LSU women’s basketball’s upset of Penn State took third in web site column, while a feature on LSU baseball’s return to Omaha took second in the feature category.

LSU Associate SID Will Stafford had LSU’s other win in the SID contests with a first place in Division IV Media Guide for his men’s and women’s track and field guide. The judge commented: “The success of this guide was simply stated with the cover — smoking running shoes — and went from there with the great history of the program and success of the current teams.”

Hawthorne scored his first in the best college radio play-by-play in the state with the call of LSU’s 99-yard game-winning drive against Arkansas in Tiger Stadium last fall. The judge commented: “Hawthorne was blessed with a 99-yard game-winning drive to call, and he painted the picture and conveyed the drama superbly. He and longtime color analyst Doug Moreau were in perfect rhythm.”