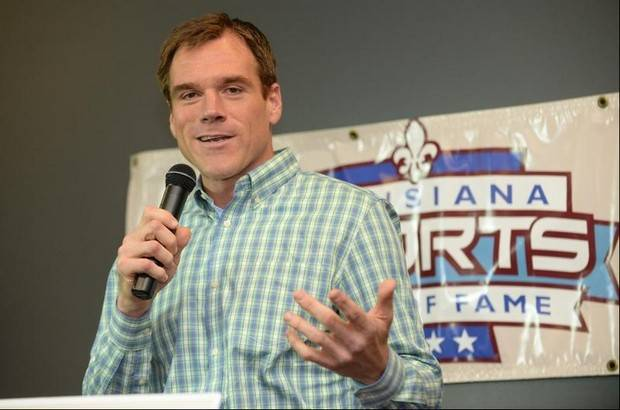 NATCHITOCHES, La. – Louisiana Sports Hall of Fame 2014 members Alan Faneca and Pete Boudreaux both have their memories of Tiger Stadium.

For one the memories came as a youngster growing up, while the other spent his college years in the offensive trenches for the Purple and Gold.

The two are part of the class that will be inducted here Saturday night in ceremonies at the Natchitoches Events Center. The pair, who both attended college at LSU, were part of the first-ever kickoff press conference held in the one-year-old Hall of Fame building on Front Street.

Boudreaux won the SEC indoor pole vault championship while a Tiger in 1965 and has gone on to win 41 state track and field and cross country titles at Catholic High in Baton Rouge.

Faneca earned first-team All-American honors in 1997 and then played 13 years in the NFL, primarily with the Pittsburgh Steelers.

Also included in the induction will be Joe Macaluso of The Advocate who is receiving the Distinguished Service Award in Sports Journalism and Dixon Leadership Award winners Tynes Hildebrand, former coach and AD at Northwestern State, and Wright Waters, former commissioner of the Sun Belt Conference.

“We used to love to go to Tiger Stadium,” Boudreaux remembered of his days growing up in Baton Rouge. We’d play football in Tiger Stadium. The gates were open. We’d go to Alex Box and throw the baseball.”

“Nothing better,” was all Faneca needed to say when asked what Saturday night in Tiger Stadium was all about to those who played.

The veteran coach found his athletic feet in a vacant lot next door to his Baton Rouge house. “In the fall it was a football field. We had a basketball goal on the roof and it was a basketball court. In the spring, we built a track around the vacant lot and we built a pit and pole vaulted and jumped and ran and did everything. The name of the place was ‘The Lot’.”

Faneca, who is about 100 pounds less than his playing weight, has run a marathon and is doing extensive work with the Epilepsy Foundation of American. Faneca himself was diagnosed with the disease at age 15, and has controlled it since with medication.

“I was looking at the logo (of the Hall of Fame) and thinking about here I was playing biddy basketball on the Jefferson Parish All-Stars and here I am now in the Louisiana Sports Hall of Fame. It’s a very humbling honor,” he said.

The picture painted of Faneca for the Hall of Fame is one with the “Eye of the Tiger” in the background with Faneca holding up the Lombardi Trophy from the Steelers win in Super Bowl XL (2006).

“The picture they chose to draw is the one showing me holding the trophy,” said Faneca, “I get chills every time I see it and I’m moved again to see it in the Hall.”

But maybe it was Boudreaux who made the comment that fit all the Hall of Famers as they began their induction weekend in Natchitoches.

“You made this guy feel like somebody,” as a big smile came over his face.