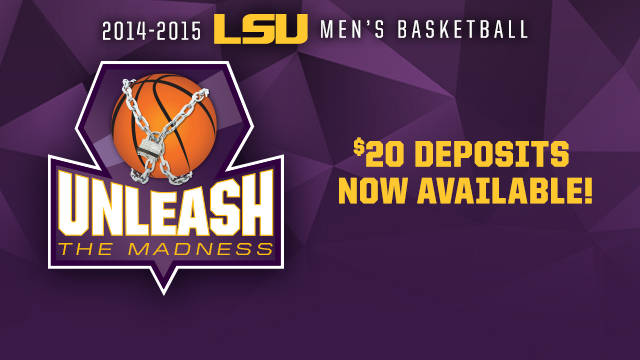 BATON ROUGE – The LSU Athletics Department announced that it is beginning its season ticket deposit campaign for the 2014-15 men’s basketball season. This year’s campaign will have prizes attached to various levels of ticket sales throughout the campaign.

“Unleash the Madness” will allow fans to reserve their seat in the Maravich Center for the 2014-15 men’s basketball season by purchasing a $20 deposit. Deposits may be applied to season tickets or mini-plans during the upcoming campaign.

For every 100 deposits sold through 1,000, a series of prizes and athletic experiences will be released. Fans who have made a deposit will be eligible for prizes at each threshold reached after their deposits have been submitted. Winners will be selected on a random basis.

Among the prizes are two (2) tickets to the LSU football game versus Alabama with on-field access, tour of the new south endzone in Tiger Stadium with coach Johnny Jones, courtside tickets to a men’s basketball game along with much more. Log on to www.LSUsports.net/madness for a full list of prizes.

LSU won 20 games a year ago and returns All-SEC forwards Jarell Martin and Jordan Mickey for their sophomore seasons. LSU advanced to postseason play for the first time since 2009, getting to the second round of the NIT.

While LSU and the SEC have yet to release schedules, the Tigers are expected to play teams like Kentucky, Florida, Tennessee, Alabama and Texas A&M at home in league games, with probable non-conference games against UMass and Texas Tech.

The campaign begins when LSUtix.net opens for deposits on Sunday, June 22. For further information, contact the LSU Athletics Ticket Office at (225) 578-2184.