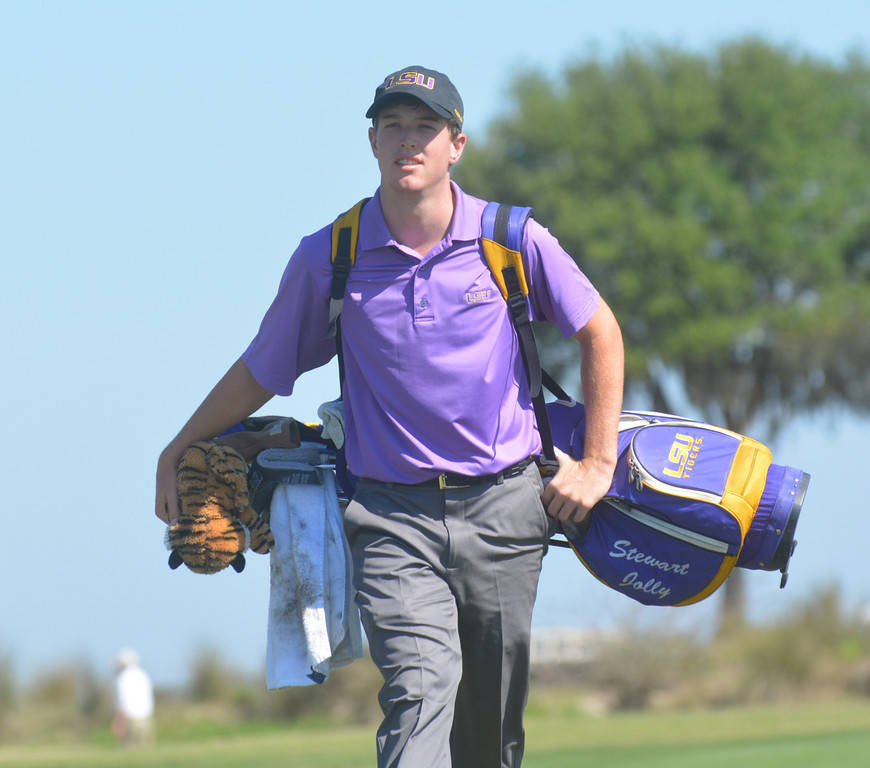 BATON ROUGE – After leading the Tigers into the NCAA semifinals of match play and a tie for third place team finish at the 2014 NCAA Division I Men’s Golf Championships, juniors Stewart Jolly and Curtis Thompson have earned Golfweek All-American honors in addition to their All-SEC selections for their performance during the 2013-14 campaign.

Jolly is an All-American for the first time in his career as a Golfweek Third-Team All-American after also being named a First-Team All-SEC selection as the team’s leading performer for 2013-14.

This marks the sixth-straight season in which at least one LSU Tiger has garnered All-America with his outstanding performance on the course as Jolly and Thompson follow the likes of John Peterson (2009, 2010, 2011), Andrew Loupe (2010, 2011) and Sang Yi (2012) as recent selections, along with Thompson’s recognition a year ago. It also marks the third time in five seasons in which two Tigers have been named All-Americans.

Jolly and Thompson led the Tigers to their best finish at the NCAA Championships since a third-place team finish in 1967 when they officially tied for third with their run to the NCAA semifinals of match play in 2014.

A native of Birmingham, Alabama, Jolly finished the season as the No. 29-ranked collegiate player nationally by Golfweek and the No. 30-ranked collegiate player nationally by Golfstat in the final individual rankings this season. Jolly smashed his career-low with a team-leading 71.50 scoring average while appearing in all 12 tournaments with the Tigers in 2013-14. He had a team-leading three top-five finishes and five top-10 finishes on the year, including a win at the Golfweek Conference Challenge held at Spirit Hollow Golf Club in Burlington, Iowa, during the 2013 fall season.

With his performance, Jolly earned a spot on the 10-man Team USA roster that will compete at the 2014 Palmer Cup being held from June 26-28 at Walton Heath Golf Club in Surrey, England.

A native of Coral Springs, Florida, Thompson ended his junior campaign as the No. 39-ranked collegiate player nationally by Golfweek and the No. 27-ranked collegiate player nationally by Golfstat. He followed Jolly this season as the team’s second-leading scorer with a career-low 71.78 scoring average while also cracking LSU’s starting lineup in all 12 tournaments during fall and spring. Thompson finished up the year with a pair of top-five finishes and three top-10 finishes on the season.

The Tiger tandem continues to rake in the postseason accolades for their performance in 2013-14 as they also joined senior Smylie Kaufman as PING All-Southeast Region selections during the campaign.