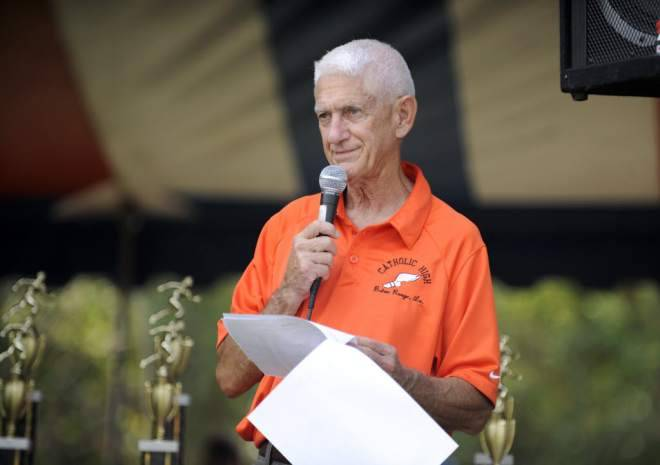 Editor’s Note: This is the second of three profiles of inductees for the Louisiana Sports Hall of Fame that have LSU ties. Pete Boudreaux attended LSU and took part in track and field at LSU, winning the Southeastern Conference championship in 1965. He and his wife Pat have been a fixture in the LSU Track and Field Officials Association for many years. This year’s induction is set for Saturday night at the Natchitoches Events Center.

Getting to coach at his alma mater, Baton Rouge’s Catholic High, was a dream come true for Pete Boudreaux.

The Bears were second in the district in track and field in his first year, 1969. It was the school’s best finish ever. What happened next would have baffled some and discouraged many others.
Instead it helped launch a Hall of Fame career.

“The first year I coached, we had a couple of kids who were pretty good. I inherited them. I just cared about them,” Boudreaux recalls. “I laugh about it now because I thought it (coaching) is not that hard.

“The next year we were dead last in district and the following year, I think we scored something like seven points. That’s when I really started learning. I knew I’d better get a grasp on how to coach all the events.”

Boudreaux didn’t just get a “grasp” on coaching track and field and cross country. He has mastered it like no other high school coach in Louisiana history. Now he is the first high school track coach to be inducted into the Louisiana Sports Hall of Fame.

Boudreaux will be inducted in Natchitoches on Saturday night, June 21 to culminate the June 19-21 Louisiana Sports Hall of Fame Induction Celebration. A complete schedule and participation opportunities are at LaSportsHall.com or can be obtained by calling the Hall of Fame Foundation office at 318-238-4255.

Plenty of things have changed during Boudreaux’s 46-year tenure as head coach of the Bears.

His philosophy that melds teaching and learning remains the same.

First came Boudreaux’s desire to compete and the lessons that go with it.

“We had a vacant lot next to our house the entire time I was growing up,” Boudreaux said. “It was the only vacant lot in the entire neighborhood. In the fall, it was a football field; in the summer it was a baseball field and in the spring we built a little track. As we got older, we’d all bring our little brothers along.

“And we dug a hole. One of the parents would take us downtown in a truck or van to a lumber company and load it up with sawdust. That was the pole vaulting pit. We just played all the time.”

“I didn’t start playing sports at Catholic right away because my brothers and I all had to work to earn money for our tuition,” Boudreaux said. “I only weighed about 115 pounds when I was in high school.

“I got cut from the basketball team. But believe it or not, that was a great experience for me because I learned how devastating something like that could be and that it doesn’t mean your life is over. It means you go try something else. So then I started in track in my junior year.”

As a senior, Boudreaux competed in four events, including the pole vault, to complete what he calls an “average” career. Interestingly, he missed out on going to the state meet in the pole vault that year based on a coin flip after tying at the same height with two other competitors.

After a stint in the Army, Boudreaux returned to Baton Rouge and enrolled at LSU, where he joined the track team. He competed one year for legendary coach Al Moreau and went on to become a record-setting Southeastern Conference champion in the pole vault in 1965.

“I was so proud being an LSU athlete,” Boudreaux said. “Growing up, every kid in Baton Rouge wanted to go to Tiger Stadium and play football. As I got older, I thought maybe I’d be able to pole vault there and I was able to do that. To this day I’m so proud of it. I never dreamed of being a SEC champion or setting a record.”

Transitioning from athlete to coach made sense for Boudreaux, but he knew he had a lot to learn and went to work.

“I sought out as many people as I could who coached track,” Boudreaux said. “I went to clinics and I asked questions. I know there were some people who were tired of seeing me or answering my questions.

“And for me, that’s the thing … you always have to keep on learning. To this day I still know there are things I can learn.”

Boudreaux’s ability to convey a sense of caring, while also teaching what he knows, is as much a part of Catholic’s success as is any specific strategy.

“I’ve worked with Pete for a lot of years and his energy and enthusiasm have never changed,” Catholic High assistant coach Don Hood said. “He’s always treated me so well as an assistant. Now that’s not to say we agree on everything, because we don’t. But there’s a respect and you work things out.

“It’s the same way with the kids we have. Over the years, the numbers have grown and that changes some things. Pete has a way of relating to them and getting the most out of them. And it doesn’t matter whether one guy is fast and the other isn’t. He encourages them to be the best they can be.”

Episcopal coach Claney Duplechin has an impressive string of championships of his own. Duplechin developed his core coaching values as an assistant at Catholic from 1975-77.
“When I came to Catholic, I was an assistant football coach and I really wanted to work with baseball,” Duplechin recalls. “I was told that I’d be working with track instead. I competed in track, but I wasn’t sure about coaching it.

“A lot of things that became the foundation of the program at Episcopal came from what I learned working with Pete. We were both pole vaulters and back then we’d vault after practice.

“One of the biggest things I learned is that you’re there to coach the child, not the sport. Never berate or humiliate a kid in public. The overall goal is to make the kids better people, not just better athletes.”

Boudreaux’s wife of 48 years, Pat, works track and cross country meets year in and year out and has her own views on what makes her husband’s approach work.

“I had one coach tell me this year he’d wish Pete would tell everybody what his secret is … how can he get the kids he has to run fast,” she said. “The answer to that is he never tells them they can’t.”

Pat Boudreaux, a breast cancer survivor, offers her own personal take: “I know Pete’s a great coach. He was there for me at all but one of my chemo treatments. He coached me through it and I couldn’t have done it without him.”

Former Florida State and NFL running back Warrick Dunn, already a Louisiana Sports Hall of Fame member, was a star sprinter for Boudreaux at Catholic in the early 1990s.

“He (Boudreaux) is a terrific individual, not just a coach,” Dunn said. “He is committed to young people and teaching them.