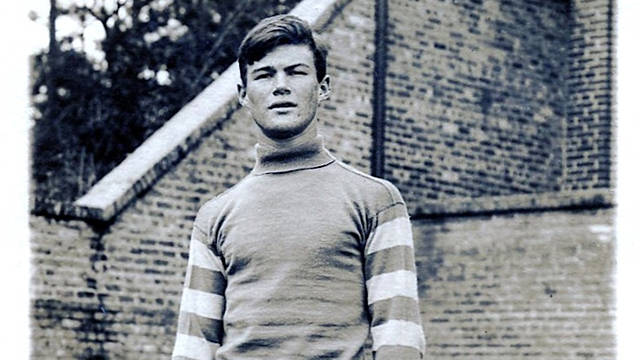 Editor’s Note: This is the first of three profiles of inductees for the Louisiana Sports Hall of Fame that have LSU ties. “Moon” Ducote’ served as assistant football coach and for one year also head coach of both the LSU basketball and baseball programs. This year’s induction is set for Saturday night at the Natchitoches Events Center.

It wasn’t just any field goal, nor was “Moon” Ducote’ just any player.

It was a 41-yard field goal for a Cleveland naval reserve team that beat the mighty Pittsburgh Penguins, 10-9, ending a six-year unbeaten streak by the fabled professional football team of that era. News of that feat, in addition to Ducote’s football prowess from 1915-17 at Auburn University, prompted Glenn “Pop” Warner to call Ducote’ “the greatest football player I ever saw.”

Yet, the man’s acclaim in his short life transcended football – a game that changed one of its rules because of him — as he was also a college coach in multiple sports at multiple schools, an athletics director, a college football official, a professional baseball player and an excellent golfer.

More than all those things, he was evidently an extraordinary man.

Ducote’ is among a distinguished group of sports legends being inducted Saturday night, June 21, into the Louisiana Sports Hall of Fame in Natchitoches. He goes in posthumously.

The Induction Dinner and Ceremony presented by State Farm Insurance will culminate the June 19-21 Louisiana Sports Hall of Fame Induction Celebration. A complete schedule and participation opportunities are at LaSportsHall.com or can be obtained by calling the Hall of Fame Foundation office at 318-238-4255.

Roy was quoted in a column the next day by Hall of Fame sportswriter William Keefe of the Times-Picayune as saying that Ducote’s “entire life could be used as a model for any youth to try and mold his own life after. I don’t think I have ever known a man for whom his friends had such a profound regard. And the better Moon was known, the more he was loved.”

“I used to hear my mother say how much fun Moon was, that it was always a pleasure to be around him,” said Madeline Jeansonne of Alexandria, Moon’s niece, whose grandmother raised Moon and who used to talk from time to time about Moon with her aunt Catherine, Moon’s widow.

The 60-year-old Roy, a professional fund-raiser who was a Catholic priest for 20 years, including 10 in Natchitoches, is the Ducote’ family historian.

“Richard always had close relationships with Jesuit priests,” he said, noting his uncle’s early years (age 9-17) at Spring Hill College Boarding School to his later years as a football coach and athletics director at Spring Hill in Mobile, Ala., and at Loyola of New Orleans. “He was a man with a lot of character and integrity apparently, and an honest and good-natured person.”

It’s uncertain when he got the nickname “Moon,” but Roy suspects he got that tag because of his round face while he was at the boarding school, where he was a football and baseball star as well as the valedictorian of his senior class. He was a virile, athletic youth, and by age 18 he was a 6-foot, 192-pound end at Auburn University under Coach Mike Donahue.

He was twice named to the All-Southern Conference team at Auburn, in 1916 and ’17, and was one of the first people to receive that honor for two straight years. He kicked a 48-yard field goal off the top of his helmet to beat Georgia in 1916, 3-0, and after he kicked a 51-yard field goal against Vanderbilt that season in the same fashion (in a 20-9 loss), the NCAA changed its rules to limit placekicks from the ground only.

Ducote’ played at guard and fullback at Auburn, in addition to his early time at end, but his best work was at fullback. He and LSU’s first great football player, quarterback George Ellwood “Doc” Fenton (1907-09) were described by the Times-Picayune as “two of the greatest football players ever produced in the South” in a Dec. 31, 1922 story about them being named assistant football coaches at LSU under Donahue, the Tigers’ head coach from 1923-27.

Ducote’ was also a three-year letterman in baseball at Auburn and later took those skills to the professional level when he played for the Mobile Bears minor league team in the Southern Association from 1919-21, playing 300 games as an outfielder and batting .250. He also had shorter minor league stints playing for the Portsmouth Truckers and Charlotte Hornets.

When professional football was in its infancy, Ducote’ played a single game in 1920 for the Cleveland Tigers of the American Professional Football Association, which eventually became known as the NFL. This was just two years after his ballyhooed winning field goal against Pittsburgh, but he was married and he and Catherine had their first child, Joseph, and he chose to get into coaching at Spring Hill (1921-22).

Although he would come out of retirement as an athlete to play pro football in 1926 for the Southern All-Stars for just one season, he made an impact. George Halas, who coached the Chicago Bears to a 14-0 victory over the Southern All-Stars that season, signed a letter to Spring Hill in 1971 regarding Ducote’s induction into the Spring Hill Sports Hall of Fame, comparing him to some of the great professional players of that era like Jim Thorpe.

Needing to provide for his family at a time when the pay wasn’t good in pro football, Ducote ran a cleaning service in New Orleans from 1927-33, during part of the Great Depression. Yet, he returned to Spring Hill as head football coach and athletics director (1933-34).

Then he switched to another Jesuit school, spending time at Loyola as a backfield coach and athletics director until shortly before his death.

With six years of experience (1929-34) as an official in the Southern and Southeastern Conferences, Ducote’ was a field judge for the 1935 Rose Bowl between Alabama and Stanford in Pasadena, Calif. He was such a respected official he was voted chairman of the Southern Football Officials Association, and his grandson, Richard Ducote’ III, has the whistle used at the Rose Bowl.

In his tribute column to Ducote’ after his death, Keefe remembered a vignette from Moon’s time in Mobile when he had been appointed as athletics director of the school system.

He wrote that John Rush, the school superintendent at the time, got a call from a man who said he didn’t think Ducote’ should have been appointed because he was a Catholic and most of the schools were Protestant, and he asked if Rush knew that Ducote’ was a Catholic. Rush answered that he was not a Catholic but didn’t care about Ducote’s race, creed or religion.

“He’s as fine a man as you or I could ever hope to be,” Rush reportedly lectured, “and if you or anybody else have any objections to him you can just forget ’em. Because he’s in and in to stay as long as he wants or as long as I have anything to say about it.”

Marksville resident Peter Roy, Moon’s 84-year-old nephew, said even though his uncle was famous for his football feats, “he advised my mom not to let my two (older) brothers (Don and Van) play varsity football at LSU, I think because of the injuries that might come out of it.” He said he was 6 years old when Moon died on Good Friday morning, March 28, 1937, at his residence at 8510 Pear Street in New Orleans. His funeral Mass was at the church on the Loyola campus on Easter Sunday, followed by a cortège to St. Mary’s Assumption Cemetery in his tiny hometown of Cottonport.

“I enjoyed reading and hearing that Moon was a great athlete, and when my (since deceased) Mama was getting in her upper 80s, I recommended him to be in the (Louisiana) Sports Hall of Fame,” said Roy. “I thought he deserved to be, and what a joy for her it would have been to have him recognized in that way. She loved her brother.”

Peter Roy said he remembers one occasion when he got to visit with Ducote’ in the last year of his life. Although he doesn’t remember the conversation, he cherishes a memory when he was 6 and Moon had come to visit his mother, he and Moon sat together in a glider on the front porch for a while.

“That it’s finally happening,” he said of Ducote’s induction, “makes us all very happy. Actually our relations as a family have improved. I didn’t know, for instance, about his grandson (in Atlanta, another Richard Ducote’) also nicknamed ‘Moon.’ This has brought us together. It started a revival of the family and makes us all very happy.”