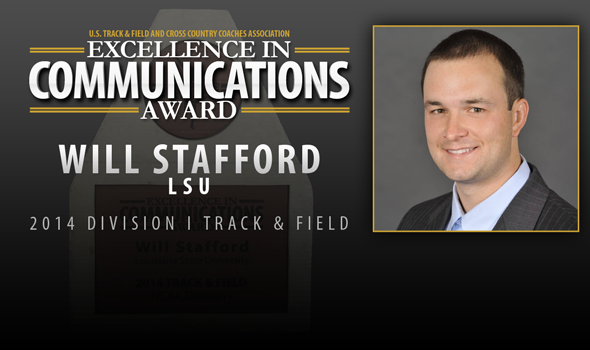 NEW ORLEANS – Will Stafford of LSU has been named the recipient of the inaugural Excellence in Communications Award for the 2014 Division I track & field season, announced Tuesday by the U.S. Track & Field and Cross Country Coaches Association (USTFCCCA).

Stafford, an associate sports information director at LSU who has been with the Tigers in some capacity since 2003, took his coverage of LSU’s track & field programs to the next level on all platforms of media.

The USTFCCCA Excellence in Communications Award, awarded for the very first time Tuesday, recognizes those athletics communications representatives at schools and conferences who have committed to excellent coverage and support of collegiate track & field and cross country.

“We are extremely happy and proud that Will Stafford has been named the recipient of the Excellence in Communications Award,” LSU Head Coach Dennis Shaver said. “Will has done so much to promote the LSU Track & Field program and the sport of track & field, and we are very fortunate to have him at LSU.”

His written pieces included in-depth preseason previews and recruiting updates for each of the sports’ event areas, in addition to feature pieces and detailed recaps of each meet that went far beyond the standard paraphrasing of results sheets – all of which are very useful to those journalists interested in covering LSU’s nationally prominent program.

“Over the years, Will has provided invaluable assistance to not only myself but other local media and media all over the country who cover the sport,” said The Baton Rouge Advocate’s Sheldon Mickles, one of the nation’s best-respected track & field journalists. “It’s easy to line up interviews and provide updated stats and lists in a timely manner, but he goes beyond the usual and is exceptionally helpful in providing interesting notes, angles and storylines about LSU’s athletes and coaches.

With his series of preseason previews taking stock of the Tigers’ roster by event group, he published a story per day in each of the 10 days leading up to LSU’s 2014 debut. He went into just as much detail to announce the signings of LSU’s future student-athletes, including videos with each signee explaining why they ultimately chose LSU.

LSU Track & Field further benefited from his active presence on social media. Updates of ongoing competitions and their historical and/or national ramifications were plentiful no matter whether LSU was in action at home or on the road.

His social media posts also took advantage of multimedia, including event videos and graphics designed to celebrate significant achievements – including top finishes at the SEC Championships. And his social media coverage isn’t limited to just the current season: he turned the LSU Track & Field Facebook page into arunning historical prospectus with photos and stories dating back to LSU participation in the 1928 Amsterdam Olympics.

That dedication to the history of the program also manifested itself in regular updates on the many former LSU student-athletes who have gone on to compete at the highest levels on the world stage in each of those aforementioned media platforms.

“He always makes sure to keep media up to date on past, present and future LSU competitors, with an emphasis, of course, on current athletes,” Mickles said. “But it’s easy to see that his knowledge of the sport of track and field also goes beyond the present with a keen interest in the rich tradition of the LSU program.”

Honorees for the 2014 track & field season in NCAA Divisions II and III, as well as the NAIA, will be announced Thursday, June 19.