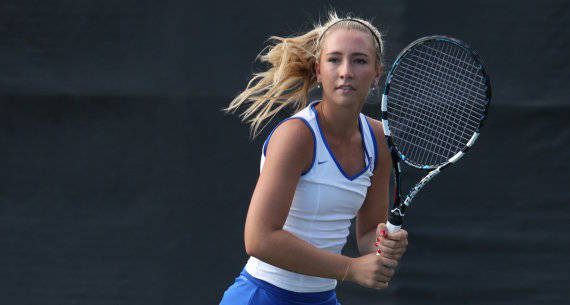 “We are excited to welcome Skylar into the Tiger family,” said Sell. “She comes to us with a lot of experience and leadership that will add instant value to our young team.”

Kuykendall joins the Lady Tigers after two seasons at the University of Memphis. The transfer garnered a 44-29 overall record, which included wins over Ole Miss’ then No. 39 Caroline Rohde-Moe 7-5, 3-6, 7-5 and Georgia’s then No. 76 Makenzie Craft 6-0, 6-2.

During her freshman year, Kuykendall posted a 28-9 mark in dual match singles, earning her the 2013 Conference USA Freshman of the Year award and a selection to the C-USA Third Team in singles.  She went on an 11-match win-streak, which began with a victory over Virginia’s then No. 92 Li Xi 7-6 (3), 7-5.

Kuykendall joined the Memphis roster as a four-star recruit from the United Tennis Academy in Bradenton, Florida, according to tennisrecruiting.net.  She was ranked as high as No. 53 nationally and posted a 4-1 record against four-star opponents with one win over a five-star opponent.

Kuykendall joins the Lady Tigers with Amanda Atanasson and Madara Straume to complete the 2014-15 recruiting class.