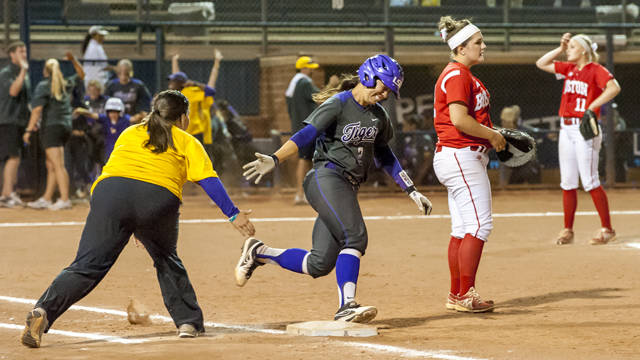 NEW ORLEANS, La. – For the second consecutive year, the state’s top freshman collegiate softball player wears Purple and Gold as LSU’s Sahvanna Jaquish was named the Louisiana Sports Writers Association Freshman of the Year the organization announced in conjunction with the release of the All-Louisiana first and second teams, which features a total of six Tiger players selected to one of the two lists.

With four players on the first team, LSU tied for the most players selected along with Louisiana-Lafayette, while garnering two more slots on the second team for six total selections, tying Northwestern State for the most combined picks on this year’s two squads.

Joined by the designated player pick Jaquish on the first team was last year’s LSWA Co-Freshman of the Year in Bianka Bell at shortstop, while A.J. Andrews was selected as one of the first team’s three outfielders for the second straight season. Selected at first base was Sandra Simmons to round out the group, the first time the Fountain Valley, California, native has been named All-Louisiana in only her second season in Baton Rouge.

With the third most wins among the four pitchers selected for the two squads, Baylee Corbello earned a spot on the second team as she was named the LSWA Pitcher of the Month and Pitcher of the Week during the regular season. Also making the cut for the second team was infielder Allison Falcon at second base, who earned the state’s top hitting honor the week of April 8, the same week she was also named the SEC Player of the Week.

Earning honorable mention recognition at catcher was Kellsi Kloss, Tammy Wray at third base and Bailey Landry in the outfield.