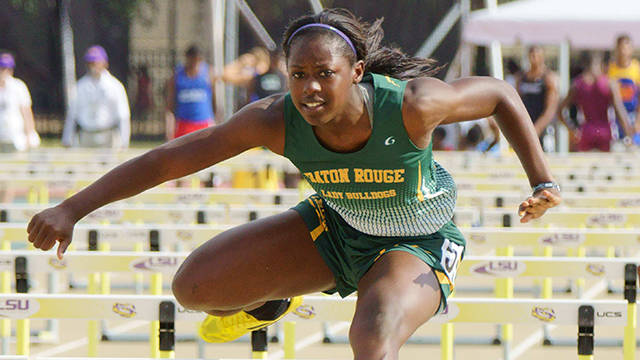 BATON ROUGE – LSU Track & Field’s heralded recruiting Class of 2014 is certainly making its presence felt in state meets across the country this month as eight recruits who have signed National Letters of Intent have combined to win 12 state titles and 18 state medals at championship meets held in the states of Louisiana, Florida and Texas in recent weeks.

Future Lady Tiger sprinters Mikiah Brisco and Aleia Hobbs were among the premier performers at the 2014 Louisiana High School Athletics Association Outdoor State Track & Field Championships held on May 10 as they teamed for seven state championships alone in the sprints, hurdles and relays running at their future home at the Bernie Moore Track Stadium.

Hobbs also defended her Class 3A championship in the 200-meter dash with a wind-aided run of 23.86 and led off Eleanor McMain High School’s state-championship-winning 4×200-meter relay team.

LSU’s middle distance and distance prospects were also among the top performers at the LHSAA Outdoor State Track & Field Championships as future Tiger Jack Wilkes of Airline High School in Shreveport was crowned the boy’s Class 5A state champion in the 800 meters with a winning time of 1 minute, 55.01 seconds and future Lady Tiger Carley Boyce captured the girl’s Class 4A state championship in the 1,600 meters with a time of 5:19.43. Boyce also raced to the Class 4A bronze medal in the 3,200 meters with a time of 12:04.97 in the state final.

Emerging hurdle star Daeshon Gordon of Northeast High School in Fort Lauderdale, Florida, headlined LSU’s national recruits, as she dominated the Florida High School Athletics Association Class 4A Outdoor State Track & Field Championships as she won her second Class 4A state title in three years in the 100-meter hurdles with a winning time of 13.88 and also defended her Class 4A state crown in the 300-meter hurdles with her time of 42.15 in the state final held on May 3.

Gordon has established herself as one of the top dual hurdlers in the United States in the Class of 2014 as she has run seasonal-best times of 13.46 (+2.5) wind-aided in the 100 hurdles and 41.45 in the 300 hurdles for a No. 5 national ranking at the high school level in both hurdle events during her senior season in 2014.

Cocoa, Florida, native and Rockledge Senior High School product Danielle Phillips was also crowned a state champion in Florida for the 2014 outdoor season as she leaped to a seasonal-best mark of 19 feet, 5 inches and the win in the Class 2A final of the girl’s long jump. Phillips also repeated as Florida’s Class 2A state silver medalist in the 100-meter hurdles with her run of 14.15 in the state final held on May 2.

Despite jumping a wind-legal personal best of 40-5 ¾ in her state final, future Lady Tiger jumper Bria Druilhet came up just two inches short of defending her Texas Class 5A state crown in the triple jump when won this year’s state bronze medal to cap her prep career at Stephen F. Austin High School in Sugar Land, Texas. Druilhet jumped a wind-aided 40-11 ½ to take the title a year ago before jumping her wind-legal PR of 40-5 ¾ with her finish at the University Interscholastic League Class 5A State Championships on May 10.