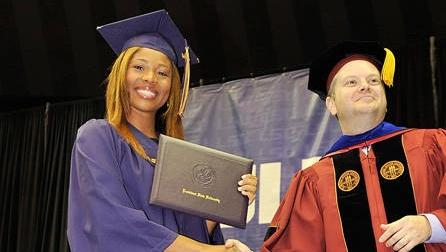 BATON ROUGE – Six members of the LSU Soccer program officially wrapped up their collegiate careers by receiving their degrees during spring commencement exercises held at the Pete Maravich Assembly Center last Friday as nine members of the team’s recruiting Class of 2010 have now graduated from LSU after playing four seasons as Tigers.

“We’re very proud of each of these young women for the commitment they’ve shown both on and off the field in the time here with us at LSU,” said LSU head coach Brian Lee. “I know that they’ll continue to be great representatives of LSU as they move on to pursue careers of their own. We know they have the tools to succeed at the highest level in wherever their career paths may take them.”

Having six players graduate on Friday afternoon caps an outstanding spring semester in the classroom for the LSU Soccer program as 20 Tigers finished the semester with a 3.0 grade-point average or higher while three Tigers posted a perfect 4.0 GPA to lead the team.