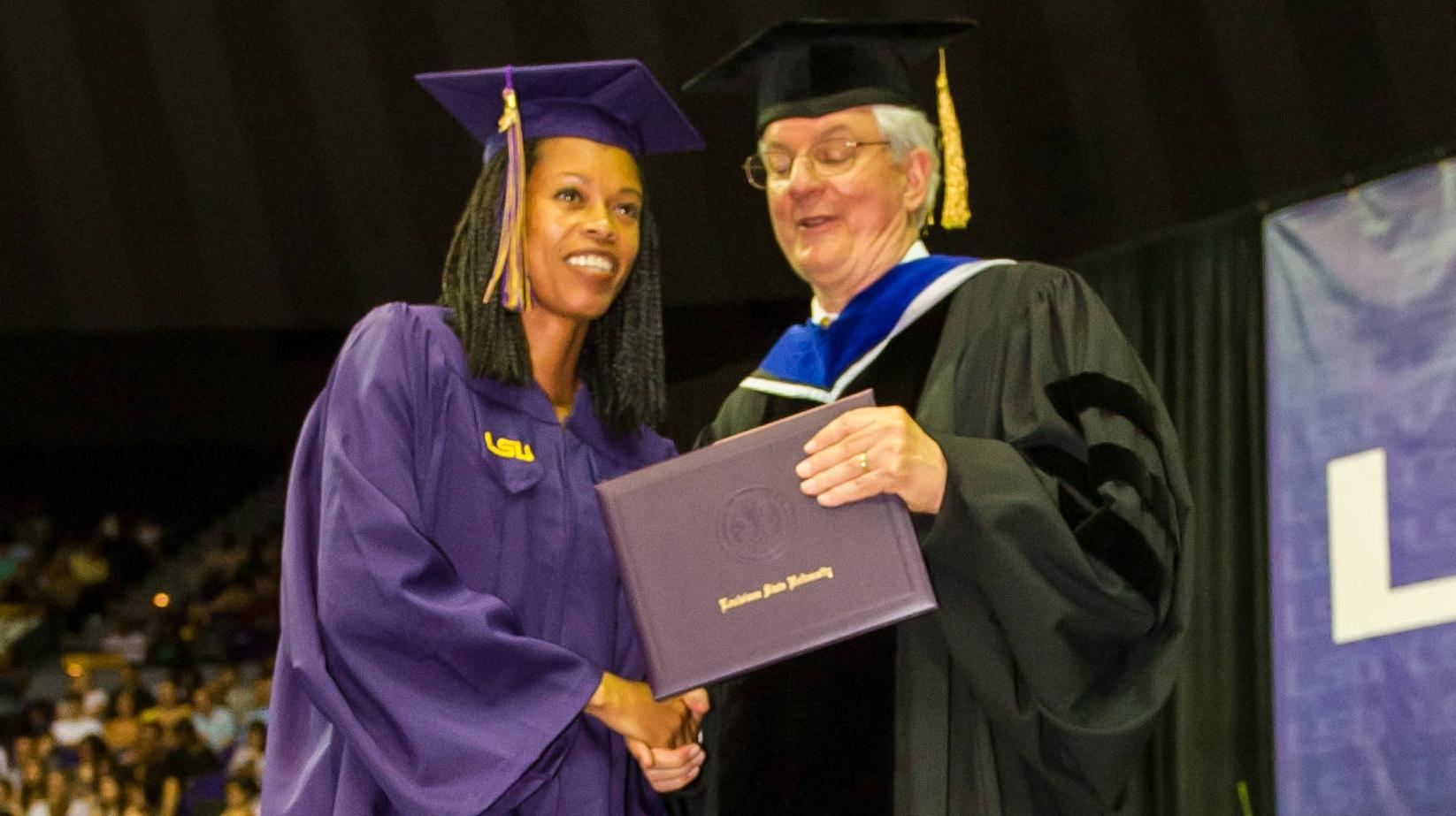 BATON ROUGE – One of the greatest sprinters to ever lace up a pair of spikes as a member of the LSU Track & Field program took part in Friday’s commencement exercises on campus as Muna Lee was among nine Tigers and Lady Tigers to earn degrees as new LSU graduates after completing their work in the classroom.

Lee received her degree in interdisciplinary studies as she walked during commencement exercises on Friday night with the College of Humanities & Social Sciences at the Pete Maravich Assembly Center.

During Lee’s four-year collegiate career from 2001-04, she led the Lady Tigers to four national championships, including three-straight NCAA Indoor team titles from 2002-04 and the NCAA Outdoor crown in 2003.

A native of Kansas City, Missouri, Lee has been a two-time Olympian for the United States following her collegiate career, placing seventh in the 200 meters in her Olympic debut in Athens, Greece, in 2004 and finishing fourth in the 200 meters and fifth in the 100 meters in a return appearance in Beijing, China, in 2008. She is also a former 2005 World Champion in the 4×100-meter relay with the United States.

Also walking with Lee during commencement with the College of Humanities & Social Sciences was former Lady Tiger All-American Charlene Lipsey, who also received her degree in interdisciplinary studies on Friday.

A native of Hempstead, New York, Lipsey is one of the most decorated 800-meter runners in the history of the Lady Tiger program while winning three SEC 800-meter titles and earning five career All-America honors in the event during her four-year career from 2010-13. Lipsey swept SEC Indoor and SEC Outdoor titles in the 800 meters as a sophomore in 2012 before defending her SEC Indoor crown as a senior in 2013.

Four athletes competing in Lexington, Kentucky, this weekend at the 2014 SEC Outdoor Track & Field Championships officially graduated with their degrees on Friday, but will delay their participation in commencement until August due to their absence. They include All-Americans Denise Hinton (kinesiology) and Jasmin Stowers (nutrition and food science), as well as Karen Henning (kinesiology) and Jaora Johnson (kinesiology).

Hinton actually earned her fourth career All-SEC honor in Thursday’s opener at the SEC Championships when she won her second-straight SEC silver medal in the women’s hammer throw. Hinton is one of the most decorated throwers in program history as she has also won back-to-back SEC Indoor championships in the weight throw in 2013 and 2014, while also earning her first career All-America honor in the weight throw as the fifth-place finisher nationally at the NCAA Indoor Championships earlier this year.

Hinton will end her career as LSU’s school-record holder in both the weight throw indoors with a career best of 73 feet, 1 inch and the hammer throw outdoors with a lifetime best of 218-0 set during the 2014 season.

Stowers is a school-record holder in her own right as one of the elite sprint hurdlers to ever wear the purple and gold, clocking a school record of 7.96 seconds in winning her second-straight NCAA Indoor bronze medal in 2014 with her sixth career All-America honor as a Lady Tiger. She is even closing in on LSU’s school record in the 100-meter hurdles outdoors after running a personal best of 12.81 this outdoor season.

A three-time SEC Indoor champion it the 60 hurdles, Stowers is running for her third career SEC Outdoor crown in the 100 hurdles this weekend as the NCAA’s No. 3-ranked performer in the event this spring.

Three other LSU Track & Field athletes who graduated on Friday were All-SEC javelin thrower Annie Simoneaux with her degree in kinesiology, as well as distance runners Michelle Mobley with her degree in marketing and William Wiesler with his degree in general business.