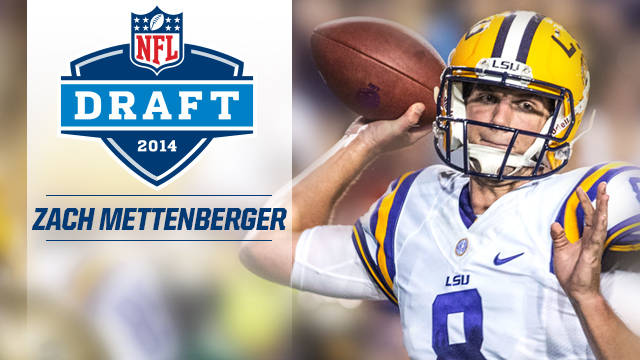 BATON ROUGE — After a nation-leading five players were selected in the opening three rounds of the 2014 NFL Draft, four more members of the LSU football team heard their name called during Saturday’s final four rounds.

The total of nine tied the school record set in last year’s draft and was the highest in the nation in 2014. Alabama and Notre Dame each had eight.

LSU head coach Les Miles has now put more players in the NFL draft (60) during his tenure at LSU (2005-present) than any other SEC school, and ranks second nationally to USC (61).

The first Tiger selected on day 3 of the draft was senior linebacker Lamin Barrow, who was the 156th overall pick, the 16th pick of the fifth round by the Denver Broncos.

Barrow, a linebacker from Marrero, received No. 18 prior to senior season in 2013, a jersey traditionally given to “the consummate LSU Tiger.” He was a two-year starter for the Tigers and finished his career with 230 tackles, seven pass breakups, seven QB hurries and recovered four fumbles. During 2013, he had a team-leading 91 tackles and earned second-team All-SEC honors.

The second pick of the sixth round (178 overall) was LSU senior quarterback Zach Mettenberger by the Tennessee Titans.

In just two seasons, Mettenberger threw for 5,783 yards (No. 6 in LSU history) and 35 TD’s (No. 5 in LSU history) while becoming the only player in school history to have back-to-back seasons of at least 2,500 yards. Twice named a permanent team captain by his teammates, he posted a 19-6 record before a knee injury sidelined him for LSU’s Outback Bowl game in 2013. He returned from surgery in December in time to take part in LSU’s Pro Day on April 9.

Three picks after Mettenberger, the Houston Texans selected senior running back Alfred Blue as the 181st overall pick, fifth in the sixth round.

Blue, a Boutte native, rushed for 1,253 yards and 11 TD’s during four seasons at LSU. He was sidelined by a knee injury after leading the Tigers in rushing through three weeks of the 2012 season.

Midway through the seventh round, LSU’s third wide receiver of the 2014 draft was selected, as senior James Wright became a member of the Cincinnati Bengals. Wright was the 239th overall pick. He impressed scouts and pro coaches at LSU’s Pro Day, running a 4.43 40-yard dash with a 128-inch broad jump and a 38.5-inch vertical leap. While playing behind Beckham Jr. and Landry during his senior season, he made his biggest impact on special teams in 2013.

On Thursday night, junior Odell Beckham Jr. became the highest drafted wide receiver in school history when the New York Giants selected at No. 12 of the first round.

When the draft continued on Friday evening with rounds 2 and 3, four more Tigers had been taken, giving Miles’ squad the most picks in the opening three rounds (tied with Notre Dame at five).

First, junior defensive tackle Ego Ferguson came off the board with the 19th pick (51st overall) of the second round by the Chicago Bears. Ferguson became the 300th LSU Tiger to be selected in NFL Draft history, and his selection marked the 11th-straight year that an LSU defensive lineman was picked.

Four picks later, sophomore running back Jeremy Hill was tabbed by the Cincinnati Bengals as the 55th overall pick, 23rd in the second round. Though no backs were taken in the first 53 picks of the draft, Hill was the second of eight runners taken between 54th and 97th on Friday night.

Before the second round was done, junior Jarvis Landry was plucked by the Miami Dolphins as the 63rd overall selection, 31st in the second round. Landry joined Beckham Jr. as 1000-yard receivers in 2013, and was among a record 12 wide receivers taken in the first two rounds.

The last of five underclassmen to come off the board in the first three rounds was offensive guard Trai Turner, who was the 92nd overall pick (28th in the third round) by the Carolina Panthers.

Didn’t go how I wanted it to go but it went how God had it. Proud to say that I am a Philadelphia Eagle. blessed to have the opportunity

I’m going to be a #Cowboys #CowboysNation

Thankful for the opportunity that’s at hand not to many guys can say that participated in this and I’m blessed. Let me EAT!!!!!!!!! ❌

On hoping Barrow would fall to them after trading back
“It comes down to a matter of how many linebackers are still there that can come in and help you. I thought it was a safe move for us to go back. The linebackers started moving a little bit so it made for some nervous moments but fortunately he got to us.”

On Barrow
“He’s a tough guy and a good kid. He can play ‘Mike’ or ‘Will.’ He’s got good speed, can run and has good instincts. He’s going to bring great competition to the linebacker group.”

On playing inside or outside linebacker
“I definitely came into the fold—came up as an inside linebacker. But then LSU and their coach, [LSU Defensive Coordinator John] Chavis he had me on the left side and then the middle, but it’s definitely something I’m looking forward to (playing in the middle). I feel like I’m going to work really hard and whatever they need me to play, I’ll play it.”

On his experience and playing in big games
“Just coming from LSU and playing with some of the players there, I feel like that had a big effect. They were always helping me out tremendously, they’re always going to grind at me, grind for me. It was always coming in from the beginning, came in with the mindset to work. I had to do that with Kevin [Minter], we got on the field last year, we did great things. [It was] kind of one of those situations where I missed him a little bit last year but I was telling him I can deal [with it]. We can do great things, do different things.”

On his leadership and slowing down Texas A&M QB Johnny Manziel
“Losing seven starters, the depth of the team, the lineup of the defensive team as a whole, leaned on me and looked to me for guidance and leadership. I had to focus on that a little bit more than last year. It’s something that I feel like I was ready for. Something like I feel like I’m a natural leader and it helped me to do that and to wear number 18 as a representative of LSU, you know I was ready for. And just playing a guy like that, a guy like Johnny Manziel, you always have to be ready. And Chavis, he always dials up a great game plan against those guys and I think two years in a row playing that guy, we pretty much stoned him. He’s a hell of an athlete, that’s pretty clear, but we tried to come out with a real defensive mindset, tried not to give him an inch and we did that.”

On the moment of being drafted
“The moment was just surreal. There was so much you’ve been waiting on; I’ve been dreaming of this my whole life. Just watching the draft, you get frustrated seeing some of the guys, some of the people going before me, teams passing on me. And I got on the phone, I talked to Coach [Defensive Coordinator] Del Rio and I talked to Mr. [EVP of Football Ops./GM John] Elway and they just said, ‘Welcome to the family.’ I knew it was real at that point and I’m celebrating with my family, we’re just celebrating right now.”

On playing special teams
“Oh definitely. I think I’m going to make my first impact, maybe made my biggest impact on special teams. I’m definitely trying to work at that in addition to my contributions on defense. I just can’t wait to get down there and start working.”

With the 178th overall pick in the sixth round, the Titans select LSU quarterback Zach Mettenberger! #TitansDraft #TitanUp