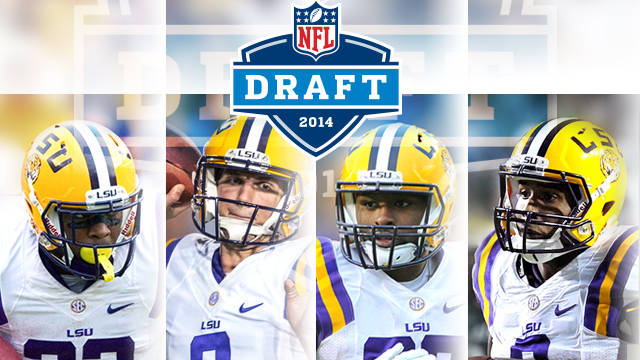 Beckham Jr. is projected to be a mid-first round selection as he headlines the list of LSU players that are expected to be picked over the next three days. Other standouts such as running back Jeremy Hill, quarterback Zach Mettenberger and wide receiver Jarvis Landry could go as high as the second round, while a host of Tigers are projected to be taken on Saturday in rounds four through seven. In all, LSU could have as many as 11 players drafted over the next three days.

The three-day NFL Draft starts at 7 p.m. CT on Thursday with the first round, followed by rounds two and three on Friday and rounds four through seven on Saturday. ESPN and the NFL Network will televise all seven rounds.

“It says a lot about your program when you have as many as nine or 10 players projected to be taken in the NFL Draft,” LSU coach Les Miles said. “I’m excited to watch the next three days unfold to see where our guys land. I think we do a great job of developing players and putting them in a position to have success at the next level. This group is no different.

“This is an outstanding group of young men who did a great job of representing our program and I’m looking forward to watching them have success in the NFL.”

Beckham Jr. will likely become the 13th first round selection for the Tigers since Miles took over the program in January of 2005. LSU goes into this week’s draft with a Southeastern Conference-leading 51 players picked over the past eight years. That figure ranks second nationally to Southern Cal, who has had 58 players selected during that span.

Last year, LSU set a school-record with nine players taken during the seven-round event, including a record eight on the defensive side of the ball. LSU became the first school in modern day NFL Draft history to have six defensive players drafted during the first three rounds a year ago.

In 2013, defensive end Barkevious Mingo and safety Eric Reid were first round picks marking the third straight year and seventh time in eight years dating back to the 2006 draft that LSU had at least one first round pick.

Under Miles, LSU has had at least five players selected in the NFL Draft every year with the record of nine coming last year. LSU has also had seven players picked in 2006 and 2008.