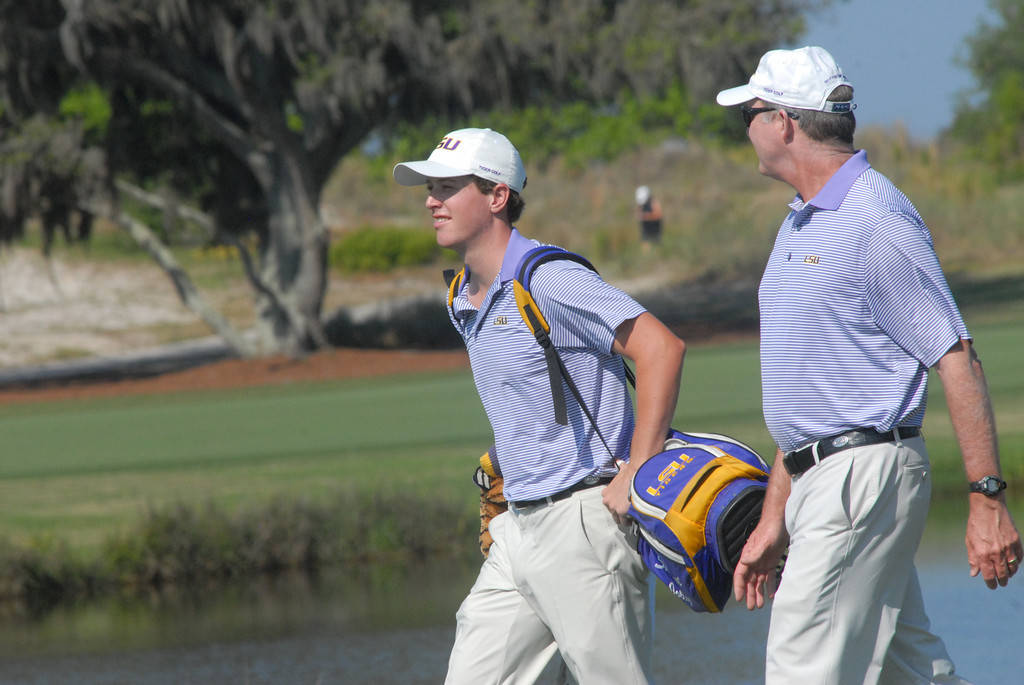 BATON ROUGE – As the 14th-ranked LSU Tigers prepare for postseason play at the NCAA Columbia (Mo.) Regional next weekend, two Tigers have been honored with All-SEC selections as junior Stewart Jolly received first-team honors and junior Curtis Thompson picked up second-team honors for their performance during the 2013-14 season.

Thompson, who was named a First-Team All-SEC performer for the first time in his career a year ago, picked up his second-straight All-SEC selection with a Second-Team All-SEC honor for the 2013-14 season.

Jolly and Thompson have led the 14th-ranked Tigers into NCAA Regional play as the squad is hitting its stride at the right time of the season in the wake of taking home the team title at the Aggie Invitational in their 2014 regular-season finale and earning a runner-up finish at the SEC Men’s Golf Championships for LSU’s best finish in the tournament since 1989. The Tigers actually fired a school-record round of 17-under 263 in their third and final round at the SEC Championships for the second-lowest 54-hole score in tournament history at 18-under 822 in their last appearance.

Jolly has smashed his career-best scoring average with a team-leading 71.53 strokes per round in 2013-14 as he has also earned a team-best three top-five and five top-10 finishes in his 10 tournament starts this season for the Tigers. That includes Jolly’s second collegiate victory as the champion of the 2013 Golfweek Conference Challenge held during the fall season at Spirit Hollow Golf Club in Burlington, Iowa.

Jolly’s 2014 spring season is highlighted by a run of three-straight top-10 finishes, including a runner-up finish at the Valspar Invitational at Floridian where he fired a career-low 10-under par 203 for 54 holes.

Jolly was recently selected as one of the 10 members for Team USA that will compete against Team Europe at the 2014 Palmer Cup to be held June 26-28 at Walton Heath Golf Club in Surrey, England. The Palmer Cup is an annual Ryder Cup-style tournament featuring the top American and top European golfers competing at the collegiate level each season.

Like Jolly, Thompson has also appeared in all 10 tournaments for the Tigers this season, earning two top-five finishes and three top-10 finishes with a career-low 72.03 scoring average on the season. Thompson opened the 2014 spring season with a seasonal-best finish by tying for fourth place at The Prestige at PGA West where he fired a 6-under par 207 for three rounds in the event held on Feb. 17-19. Thompson also earned his top career finish at the SEC Championships while tying for 13th place in his last tournament appearance.

Both Jolly and Thompson will be leading the Tigers into NCAA Regional play next weekend as they are set to travel to The Club at Old Hawthorne in Columbia, Missouri, to compete as the No. 3 seed in the 14-team field at the NCAA Columbia Regional hosted by the University of Missouri from May 15-17.

All-SEC honors were chosen by the league’s head coaches. Ties were not broken.