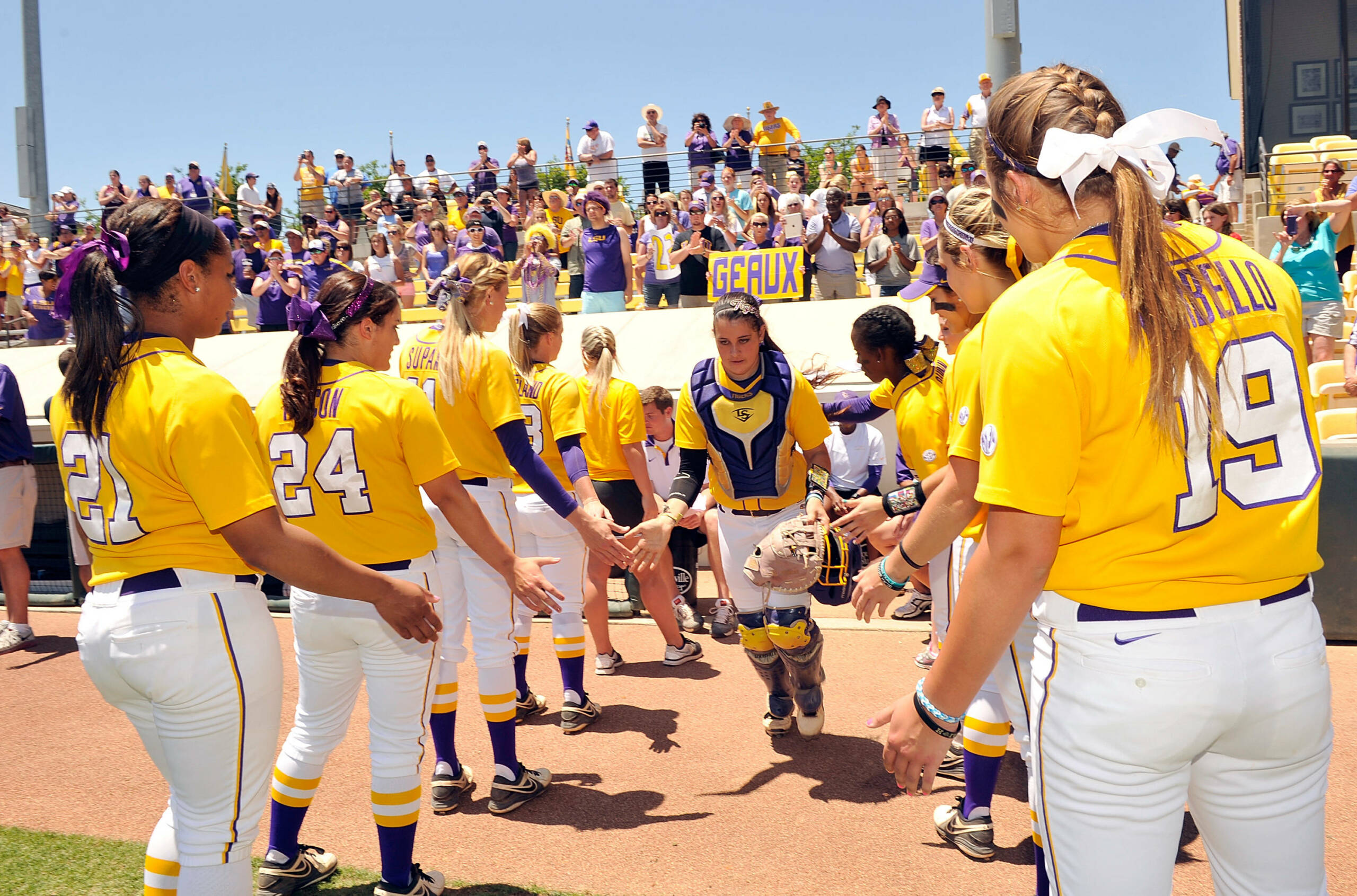 BATON ROUGE, La. – The No. 25 LSU softball team opens the 2014 SEC Softball Tournament at the Carolina Softball Stadium on Thursday morning as the sixth seed and will take on the No. 3 seed Missouri Tigers at 10 a.m. on ESPNU in Columbia.

The single-elimination tournament begins on Wednesday and with a champion being crowned on Saturday night in the four-day event. Every game of the tournament will be shown on TV and online on ESPNU and the WatchESPN app, with radio coverage on the home of LSU softball on ESPN 104.5 and 104.9 and in the Geaux Zone for subscribers with Patrick Wright.

After being picked to finished eighth in the preseason, the Tigers fared two spots better and will head into the tournament as the sixth seed after finishing tied with Kentucky, but held the tiebreaker to earn a first-round bye into Thursday’s action where eight teams will remain after the two opening round games have been contested Wednesday.

“We are looking forward to it,” head softball coach Beth Torina said. “Missouri’s someone we haven’t seen all year. We will do our homework and be prepared. They are a very quality program and have a great freshman pitcher. They did some really good things all season long, and we have our work cut out for us.”

The Tigers enter the tournament playing some of the hottest softball in the league as the squad has won eight of their last 10 games and 12 of the last 15 overall. LSU closed out the regular season last weekend in style with its fifth-straight series victory, this time coming against the Mississippi State Bulldogs at home in Tiger Park to claim 11 of their last 15 conference games.

LSU has a storied history in the league’s marquee event, owners of the most tournament victories in the tournament’s history with 36 since 1997, winning five regular season and tournament titles which is tied with Alabama for the most in the conference’s history. The Tigers will be looking for their first win in the tournament since the 2010 season, bowing out in each of the last three games the squad has appeared in.

Entering this week, the Tigers finished the regular season hitting .314 as a group which was third in the conference. If the season were to end today, the 2014 Tiger squad would have the second-best team batting average in program history. LSU has also been a power factory as the group has hit 50 home runs in a season for the first time since 2003, after hitting just 40 last year.

On Tuesday morning the league announced its end-of-the-year conference teams and the Tigers had four make the cut led by freshman Sahvanna Jaquish who was a first team All-SEC pick. A.J. Andrews was named second team all-SEC, while Baylee Corbello, Bailey Landry and Jaquish were named to the SEC All-Freshman team.

Jaquish is the second-consecutive LSU player to earn first team honors, as the Highland, California, native is only the second Tiger in program history to earn the spot at designated player/utility as the last was by Stephanie Hastings back in 1998, and is only the sixth freshman in team history to be named first team.

Playing in all but two games in her first season, and 23 of a possible 24 in league play, Jaquish has pieced together one of strongest freshmen resumes in program history, as she is currently second to Andrews in overall batting average at .331, while in league games she finished the regular season hitting .386 which was tied for sixth best in the conference. In the league she finished in the top ten in multiple categories, including seventh in total bases (54), seventh in slugging percentage (.771), tied for tenth in total hits (27), and tied for seventh in home runs (7).

With 13 total home runs, Jaquish is now tied for second all-time in single-season home runs, the most by any Tiger in their first season in Baton Rouge. She leads the team with 46 RBI and is second with 52 total hits, while tied for second on the team with 22 hits for extra-bases. One of her best games of the season came against South Carolina, where earned an individual game and program-best tying five hits against the Gamecocks, while earning multiple two home run games this season.

Since March 7, Andrews has been the benchmark for hitting for the club, as her average soared as high as .420 which was second best for any player on the team this season. One of just three players to start all 55 games for the Tigers this season in centerfield, the Oldsmar, Florida, native leads the team in batting average at .343, hits with 62, and stolen bases with 35 on 36 attempts. Her five triples are tenth in the country and lead the SEC, as she is second only to Missouri’s Taylor Gadbois in swiped bags and attempts, while she is the only player this season to steal three in a single game during conference play, with two games of at least six at-bats.

Since 2010, LSU has had at least one player named to the all-freshman team, but only can the 2014 class lay claim to the distinction of having the most players chosen for the squad in program history with three in Corbello, Landry and Jaquish, with Corbello being the first pitcher since Rachele Fico in 2010 to make the team, while Landry is the fifth outfielder and Jaquish being the first utility pick.

A finalist for the NFCA Division I National Freshman of the Year award and first SEC Freshman of the Week honoree, Lake Charles’ Corbello is one of four pitchers who made the cut for the all-freshman team, as she is currently on a five-start winning streak heading into the conference tournament this week in Columbia, South Carolina. With a team-leading 17 wins in 167.0 innings pitched, Corbello is having one of the strongest freshman seasons for a pitcher in team history as she has 20 complete games which is tied for the most along with Sarah KnifeChief, and second only to Britni Sneed in total strikeouts with 167 on the season, which is also tied for fourth in the SEC. In league games, she had the fourth lowest opposing batting average at .232 and was fourth in batters struck out looking with 21.

In her first season in the outfield, Landry has pieced together a strong season as she is averaging .333 at the plate with 31 hits and 10 RBI in 42 games played and 28 games started. In conference games, she has been even better as she has a .341 average in 19 games, with 14 hits, a fielding percentage of 1.000 and four sacrifice hits which is tied for fourth. She has eight multi-hit outings and three multi-RBI games this year, going on a six-game hitting streak and was the second longest for a first-year Tiger this season.

Bianka Bell continued her power string last weekend against the Bulldogs, hitting the go-ahead home run in the first game against MSU, while having a three-run bomb and double that closed the run-rule victory in game two. Bell is tied for the most extra-base hits on the season with 22 with 10 doubles, a triple and 11 home runs. She is only the third player in team history to earn multiple double-digit home run seasons in school history.

A senior-laden group has gotten even stronger with the late emergence of third base stalwart Tammy Wray who is hitting .309 heading into the tournament. Since beginning of the Georgia series, Wray has earned seven multi-hit games and raised her average from .167 since that time, while hitting .353 in league games which was second on the team.

Missouri wrapped up the year with a chance at the regular season title, but needed to sweep Alabama at home and won just the first game while dropping the last two to end the series. The Tigers boast the freshman of the year and first team All-SEC pitcher in Tori Finucane, as well as fellow first-teamers Corrin Genovese and Gadbois.

This will be the ninth all-time meeting between the two teams, as Missouri took two of three from LSU last season in Baton Rouge, although LSU leads the overall series with a 5-3 edge.