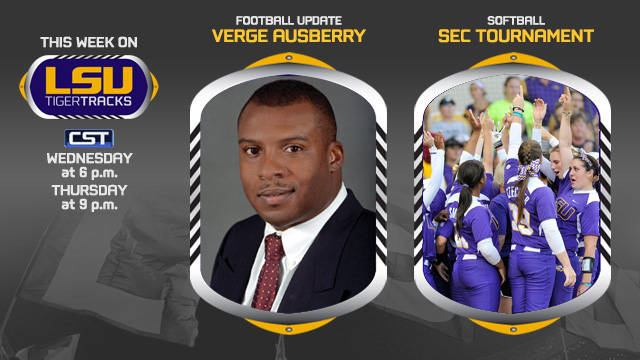 BATON ROUGE, La. – This week’s edition of LSU Tiger Tracks, a program highlighting various aspects of the university and its athletic department, can be seen at 6 p.m. Wednesday and 9 p.m. Thursday on Cox Sports Television.

LSU Tiger Tracks begins with a visit to the studio from senior associate athletic director Verge Ausberry, who provides an update on the 2014 football season and a look at future gridiron schedules.

The show also features a preview of the SEC softball tournament, as the sixth-seeded Tigers open play at 10 a.m. CT Thursday against third-seeded Missouri in Columbia, S.C.

LSU Tiger Tracks concludes with a look at “LSU Day at the Capitol,” as faculty, staff and students recently visited the Louisiana Legislature to demonstrate to lawmakers the importance of the university to the state, the nation and the world.