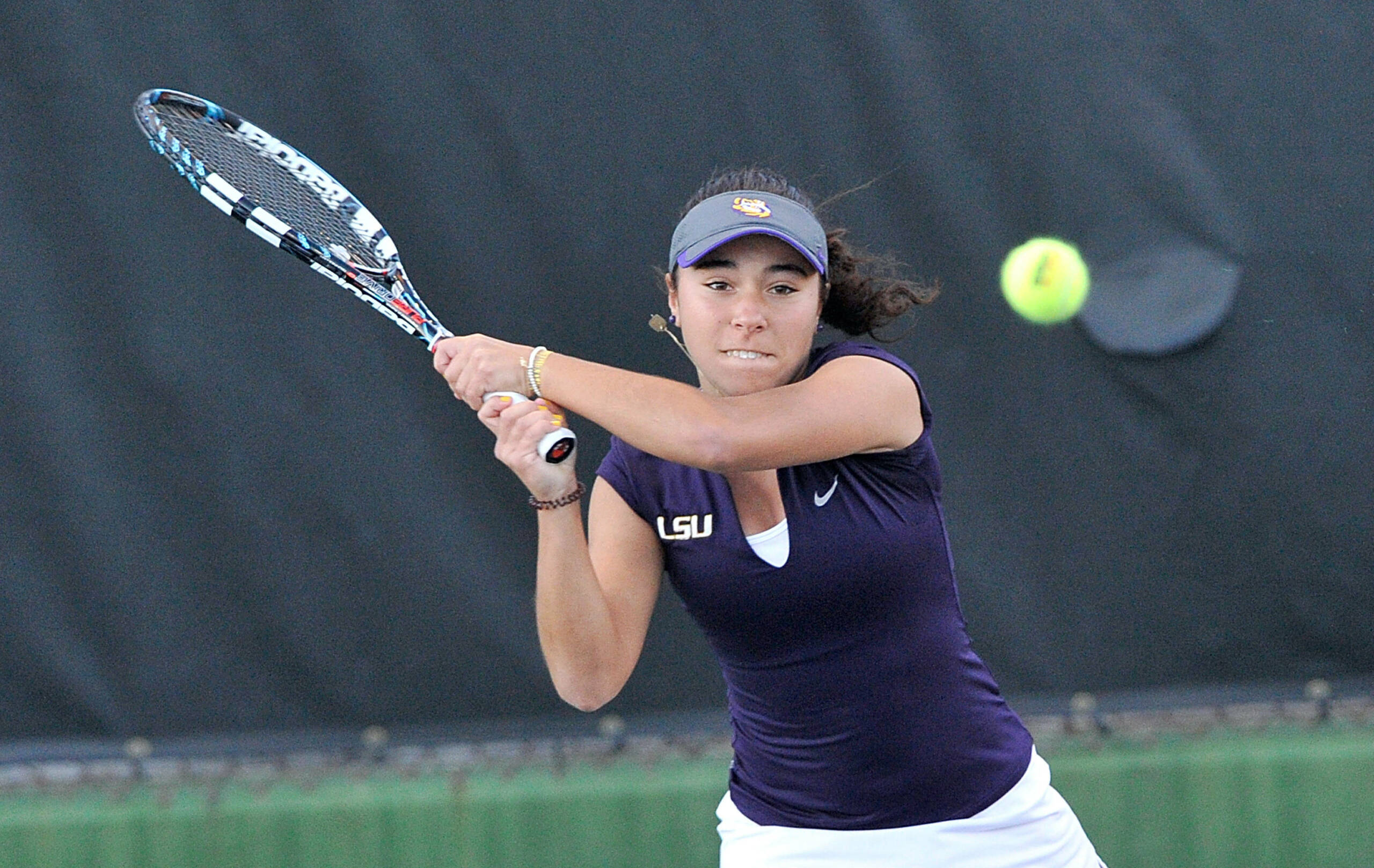 BATON ROUGE – The journey to become a high-level tennis player is not an easy one. It requires focus, countless hours of practice and a dedication that most people are not willing or able to have. Yet, for Joana Vale Costa, the dream of becoming a professional tennis player helped her work hard each day.

Family is important to Vale Costa, but she knew that the best way to advance her tennis career was to attend LSU. Then the women’s tennis team became her family, giving her the best of both worlds.

As with many children, Vale Costa began playing tennis because of her family members. Her older brothers, Filipe (27) and Tomas (24), both played tennis. When they gave her a racquet at age three, Vale Costa fell in love with the sport. From that moment on, her dream was to become a professional tennis player.

Vale Costa’s high school stats spoke for themselves. In addition to her tournament success, she was a Portuguese National Singles Champion for Under 12, Under 14, Under 16 and Under 18 as well as a Portuguese National Doubles Champion for Under 12, Under 14 and Under 16. She reached a career high of No. 782 in Women’s Tennis Association (WTA) singles rankings, No. 709 WTA doubles rankings and No. 251 in International Tennis Federation (ITF) Under 18 rankings.

As Vale Costa was beginning to think about college, many American schools and coaches began recruiting her, but she only remembers one school visiting: LSU.

Head coach Julia S. Sell and assistant coach Amine Boustani both visited Vale Costa and began building a relationship with her. Although her brother had attended the University of Florida, Vale Costa chose LSU – a decision that was largely impacted by the relationships Boustani and Sell had built with her.

“I loved Coach Sell when I met her and Coach Boustani is a really nice person,” said Vale Costa. “The decision was kind of hard, but once I started talking with the LSU coaches, I fell in love with the school and everything.”

The feelings of affection between Vale Costa and Sell are mutual.

“Joana is one of the kindest human beings you will ever meet,” said Sell, smiling. “She is a phenomenal teammate and just an all-around joy to be with. We feel really lucky to have her.”

Although Vale Costa loves Portugal, she admits that it was difficult to play tennis while attending high school. Like most students, she studied during the day, then went to practice. Her busy schedule often left her feeling exhausted at the end of the day.

“Playing tennis in Portugal is kind of hard because the school doesn’t work with the athletes to help them balance school and sports,” said Vale Costa. “I was always so tired trying to balance the two. That’s why I came to the U.S.”

Vale Costa is a self-professed “daddy’s girl” and her mother’s best friend, so the move to America was difficult in the beginning. Within the span of two weeks, the freshman moved from her family and her country, began a new school and began practicing with a team instead of as an individual.

LSU head coach Julia S. Sell understands that Vale Costa has needed time to adjust to playing on a team, attending school and living in America, but she is confident that Vale Costa will continue her high performance in the next few seasons.

On the court, Vale Costa wanted to prove that she deserved to wear the Purple and Gold, but she was putting too much pressure on herself. Sell helped her learn how to relax and play the way she is capable of playing.

Once she remembered to relax, Vale Costa’s smile came back during matches and she began having even greater success on the court. Vale Costa is currently 11-8 on the season with a 10-7 record at the No. 1 spot. She has three wins over ranked opponents highlighted by a dominating 6-3, 6-0 victory over Auburn’s No. 29 Pleun Burgmans. Additionally, Vale Costa defeated No. 56 Eve Repic to clinch the match as LSU defeated No. 26 Tennessee to advance to the quarterfinals of the SEC Tournament.

Vale Costa loves tigers. She has loved tigers since she was young, so attending a school with a tiger living right on campus is a dream come true. Sophomore Ella Taylor taught Vale Costa to draw inspiration from Mike, the school’s Bengal tiger.

Tigers are known to be fierce and incredibly strong, so when Vale Costa is having a rough day on the court or in life, she likes to think about the majestic animal to help her push forward.

“Sometimes, it’s difficult for us to go to the court and do what we have to do,” said Vale Costa. “But I thought ‘since I’m a Tiger and since I’m at LSU, I should think about the tiger, not just about tennis.’ I have to stay strong, because tigers are strong animals.”

Even though her overall goal is to become a professional tennis player, Vale Costa acknowledges the value of an education. The freshman knows that becoming a professional is hard, especially in a place that cannot provide the support LSU can provide. These are some of the reasons she chose to wear the Purple and Gold.

“I really want to be professional, and if not I will probably be a coach or something like that,” said Vale Costa. “That’s one reason (I came to LSU). I think it was the best choice that I could make. They help me a lot. This is the best college ever. They can support me, and I can learn more about tennis here.”

After talking about the importance of her own college decision, Vale Costa said she encourages younger students to play a sport while attending school. Life can be difficult when you have to balance multiple things, but having teammates who understand what you are going through makes it a little easier to get through tough times.

“Going to college is not just school for me,” said Vale Costa. “Our lives are much harder than people think, but being in a sport, it gives you a community. It gives you a family. We know that it is hard for us, but we know we are all together, so that helps us as we go through everything in our lives. I think it’s worth it for sure.”