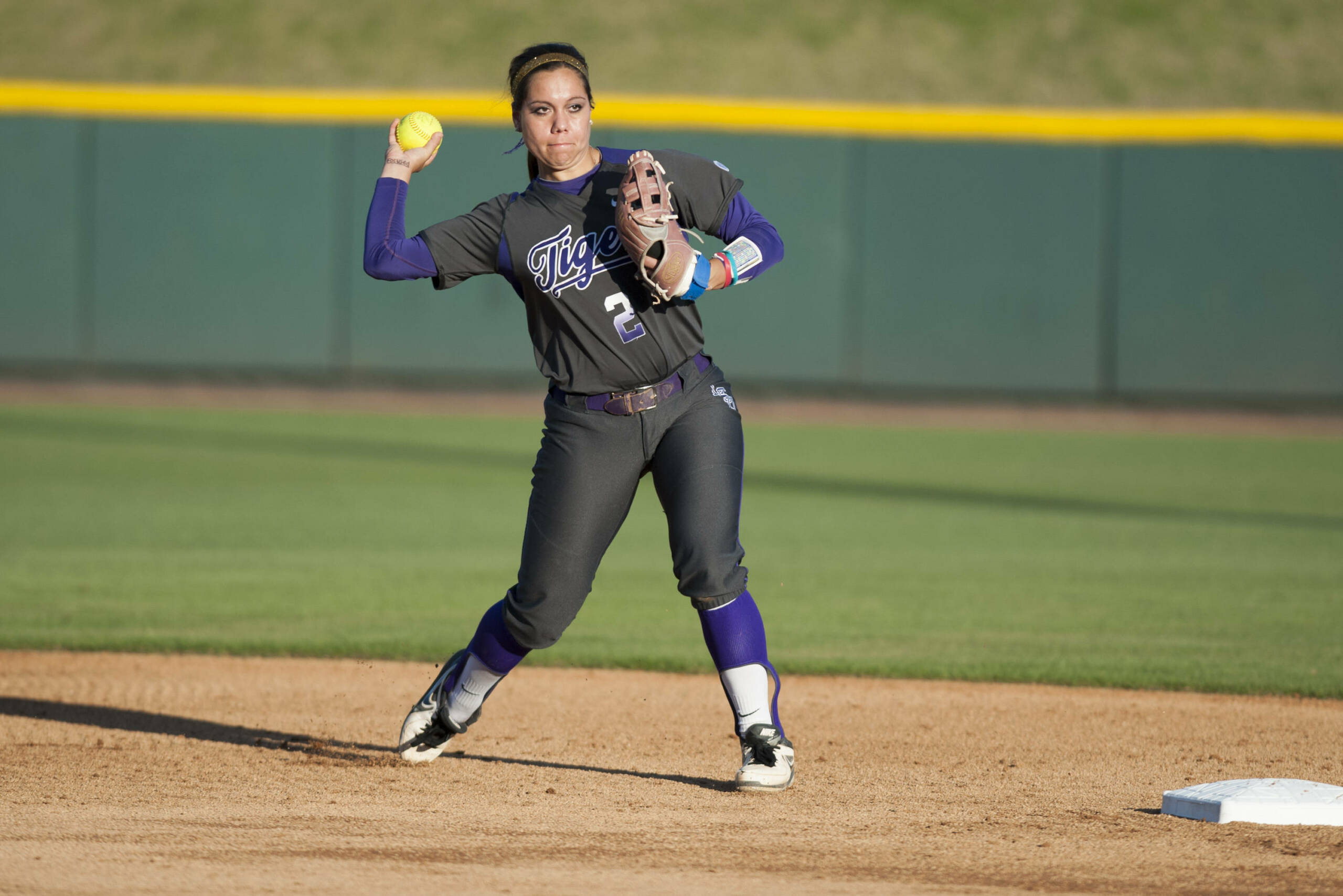 Nominee for SEC Offensive Player of the Week (4/28)

Sahvanna Jaquish, Fr., Highland, Calif.
LSU freshman Sahvanna Jaquish helped lead LSU to 4-0 week as she hit .500 with two multi-hit and multi-RBI contests in wins over No. 20 South Alabama and a sweep of Ole Miss that helped clinch a berth in the conference tournament. The Highland, Calif., native was the team’s overall top hitter as she had an on-base percentage of .563 and slugged 1.000. Currently on a seven-game hitting streak which is the longest for her this season, four of Jaquish’s six hits were for extra bases as she finished with three doubles and a home run, while driving in seven RBI and scoring five times. In the first two games of the series against the Rebels, Jaquish pieced together back-to-back 2-for-3 games as she hit her team-leading 11th home run of the season in the opening game to go with three RBI, while hitting her third double of the week in the finale to go with two RBI.

Baylee Corbello, Fr., Lake Charles, La.
LSU freshman Baylee Corbello went 2-0 on the week and allowed just four total hits with an earned run average of 0.00 in wins over No. 20 South Alabama and Ole Miss last week. The Lake Charles, La., native, winner of her last three starts in the circle, pitched every inning in her two appearances last week, improving her record to 15-7 on the year as opposing teams hit just .091 against her. Last Wednesday, Corbello outdueled a Jaguar staff that came in with the lowest team ERA in the country by striking out eight and holding her ninth team of the season to no more than three hits as only one unearned run crossed the plate in the process. In the series clincher against Ole Miss, the Rebels were the second-straight conference opponent to be held to just one hit in one of her starts, tossing her third one-hitter of the season in grinding through a 3-1 victory with four strikeouts on Saturday.

Notes on the Tigers
LSU is 31-20 on the season and 11-10 in the SEC after sweeping Ole Miss and defeating No. 20 South Alabama last week. LSU has won four-straight, and has won eight of its last 10 overall. LSU has clinched a berth in the SEC tournament next week, and has made every conference tournament since 1997. The Tigers are above .500 in league play since defeating Auburn in the conference opener in March. The Tigers have won each of their last four SEC series’, earning their first sweep of the season against the Rebels. LSU scored double-digit runs in two of the three games of the series against Ole Miss, scoring 10 or more runs in a game 12 times this season. In April alone, LSU has scored double-digit runs in a single inning three times. The Tigers are undefeated when scoring 10 or more runs in a game this year. LSU is 26-9 when outhitting its opponent. The Tigers are 10-9 in road games and 6-6 in road conference contests. When leading after four innings, LSU is 23-5 on the season. The Tigers have hit 45 home runs this season, including hitting one in every game of the Ole Miss series. 18 of the team’s 45 home runs have come in conference play. Sahvanna Jaquish hit .500 over the week with six hits, three for doubles and a home run, seven RBI and five runs scored. Jaquish leads the team in batting average in conference games with a .410 clip and is on a seven-game hitting streak which is a season-long. Since April 16, Jaquish has raised her average 45 points and is second on the team in batting average at .326. A.J. Andrews hit .455 and stole seven bases on the week. Andrews had two games with three steals on the week. Andrews scored nine times and leads the team with a .341 batting average. Bianka Bell and Jaquish are tied for the most extra-base hits this year, as Bell leads in doubles with nine and has nine home runs with a triple for 19 total. Kellsi Kloss hit her ninth home run of the year on Sunday and also has seven doubles on the season. Kailey McCasland came through for another big pinch-hit at-bat after hitting a two-run single to give LSU the lead back over Ole Miss on Sunday. McCasland has 10 RBI on the season on just four hits. Alayna Falcon earned her second multi-RBI game of her career, driving in two runs on a hit, essentially bringing in the final three runs for the team in the 10-run second as an error also occurred on the same play. Ashley Czechner had a perfect, 2-0 week in the circle, moving to 11-11 on the season. Czechner had an earned run average of 2.10 in the game one and game three, allowing just six hits in 10 innings with seven strikeouts. Baylee Corbello went 2-0 with wins over South Alabama and game two against the Rebels. She did not allow an earned run and gave up just four hits with 12 strikeouts and an opposing batting average of .091. Corbello was name the LSWA Pitcher of the Week on Tuesday. With 18 complete games and 154 strikeouts, Corbello is quickly moving up the ranks in freshman seasons as she is tied for most complete games in a season and seven strikeouts shy of holding second place for most in their first season at LSU.