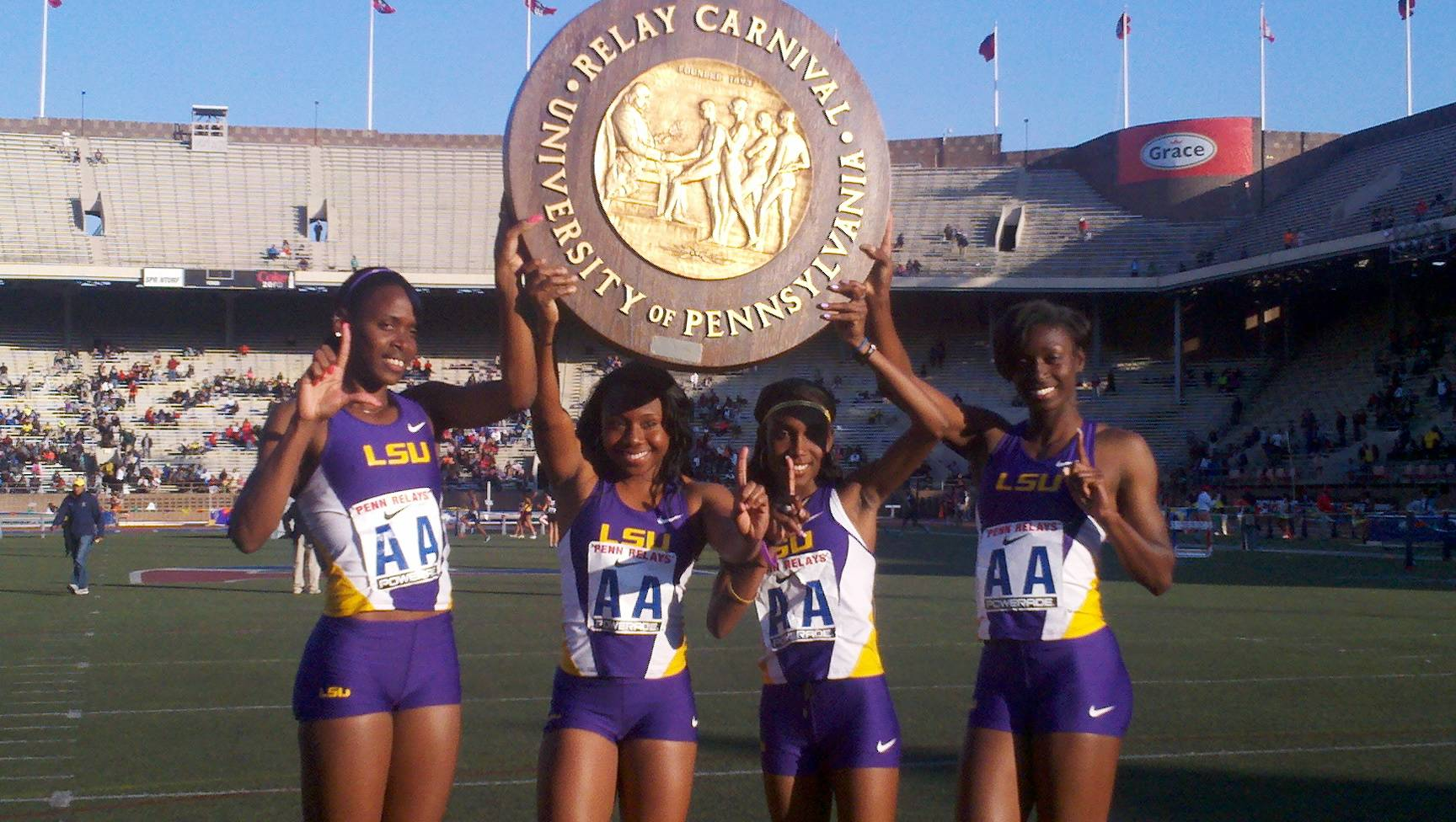 BATON ROUGE – As the LSU Track & Field teams sprint toward the end of their 2014 regular season, the Tigers and Lady Tigers will make their annual trip to historic Franklin Field in Philadelphia this weekend to compete in the 120th running of the Penn Relay Carnival as they will line up for the first time on Thursday at the University of Pennsylvania.

NBC Sports Network will televise Saturday’s “USA vs. The World” events at the Penn Relays live from 11:30 a.m.-2 p.m. CT as part of the 2014 USA Track & Field Championship Series. Flotrack will provide live streaming video of all events on the track not featured during NBC Sports Network’s “USA vs. The World” broadcast through its “Flo Pro” premium service at http://www.flotrack.org/.

The 120th Penn Relays will come to an end Saturday afternoon with the running of the Championship of America 4×400-meter relays as the Lady Tigers will run at 4:50 p.m. CT followed by the Tigers at 5 p.m.

LSU fans will receive live updates of the Tigers and Lady Tigers competing throughout the three days of competition at the 120th Penn Relays by liking LSU Track & Field on Facebook at http://facebook.com/lsutrackfield and by following @LSUTrackField on Twitter at http://twitter.com/lsutrackfield.

“Our teams look forward to the last weekend in April each year as we have another opportunity to make it back to Philadelphia to compete at the Penn Relays,” said LSU head coach Dennis Shaver. “It’s one of the truly unique events in our sport, and we’re excited to be a part of the history that takes place each and every year at Franklin Field and the University of Pennsylvania.”

LSU is among the most successful programs all-time at the Penn Relays as the Tigers and Lady Tigers are winners of 67 Championship of America relay titles and 64 individual event titles in the meet’s history. LSU’s Lady Tigers are by far the most successful women’s program in meet history with a total of 45 Championship of America relay wins all-time at the Penn Relays.

LSU is looking to continue an impressive streak as either the men’s or women’s team has won at least one Championship of America relay title in 23-straight seasons dating back to the 1991 season. The Lady Tigers won the women’s sprint medley relay a year ago to extend LSU’s streak to 22 years in a row as they have won the sprint medley relay at the Penn Relays in six of the last seven seasons since 2007.

The Tigers are coming off a successful weekend in hosting the LSU Alumni Gold last Saturday where they turned in a seasonal-best time of 38.90 seconds for the NCAA’s No. 3-ranked time in the 4×100 relay in the 2014 outdoor season. They already owned the No. 3-ranked time nationally in the 4×400 relay with a seasonal best of 3 minutes, 2.81 seconds set in a runner-up finish at the Texas Relays back on March 29.

The Lady Tigers set a seasonal best of their own in the 4×100 relay at the LSU Alumni Gold meet last weekend when they clocked 43.72 to emerge as the NCAA’s No. 7-ranked sprint relay team this season.

Jasmin Stowers, LSU’s reigning SEC Women’s Runner of the Week, has a chance to make history in her final Penn Relays appearance as a Lady Tiger as she has her sights set on winning a third career Penn Relays crown in the in the women’s university 100-meter hurdles. Stowers is one of only four women in the meet’s history to win the 100 hurdles twice at the Penn Relays as she won back-to-back titles as a freshman in 2011 and as a sophomore in 2012. No woman has ever won the event three times in the storied history of the Penn Relays.

Stowers is coming off her best performance as a Lady Tiger when she hurdled to a wind-legal personal best of 12.81 to win the event title at the LSU Alumni Gold last weekend, breaking her previous personal record of 12.88 she set as a freshman during the 2011 season. That time ranks No. 2 in the NCAA and No. 3 in the World rankings among wind-legal performances for 2014.

Former Tiger national champion Damar Forbes was LSU’s lone individual champion during the 119th Penn Relays a year ago when he soared 25 feet, 11 inches to win the men’s university long jump title for the first time in his collegiate career. Forbes’ victory in his regular-season finale propelled him to one of the most prolific postseasons in the team’s history when he swept SEC Outdoor and NCAA Outdoor championships in the long jump as one of the most decorated Tigers all-time before representing Jamaica at the 2013 IAAF World Championships in Moscow, Russia.

LSU’s athletes have certainly earned their share of recognition with their efforts at the Penn Relays over the years as nine athletes have taken home a coveted Athlete of the Meet honor with their performance.

After competing at the 120th Penn Relays this weekend, the Tigers and Lady Tigers will wrap up their 2014 regular season next week when they play host to the LSU Invitational as they welcome Florida, Miami, Ole Miss and Texas A&M to Baton Rouge for a five-team scored meet being held on Saturday, May 3, at the Bernie Moore Track Stadium.