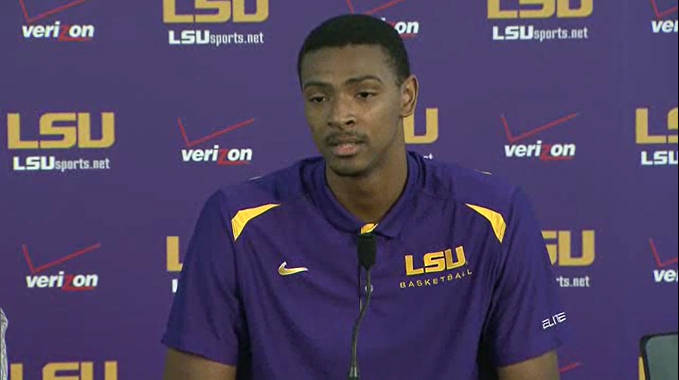 BATON ROUGE – LSU’s freshman All-America forward Jordan Mickey announced Wednesday at a media conference in the LSU practice facility that he will return for his second season as a member of the LSU men’s basketball team for the 2014-15 campaign.

Mickey averaged 12.7 points per game, 7.9 rebounds a game (fifth in the league) and led the Southeastern Conference in blocked shot average of 3.1 a game which was also ninth nationally. Mickey tied for the league lead in total blocks with 106, the fourth most in school history in a single season.

The native of Dallas, Texas became just the second LSU player in school history to block 100 shots in a single season, joining Shaquille O’Neal, who did it three times in 1990, 1991 and 1992.

Mickey scored in double figures in 26 of the 34 games and had nine double-doubles, the third-most in the SEC this past season. He averaged 32.8 minutes per game and his shooting percentage of 53.3 percent (171-321) was second best in the league.

He earned SEC Freshman of the Week honors on three occasions, the first time an LSU player had earned FOW honors for LSU since the 2009-10 season. He would earn Second Team All-SEC honors for the year and was named to the All-SEC Freshman and Defensive Teams. He would be honored by being named a member of the Kyle Macy National Freshman All-American team.

Here are some of the comments from Jordan Mickey and LSU Head Men’s Basketball Coach Johnny Jones:

F JORDAN MICKEY
Opening Statement…
“I want to start off by thanking everybody who helped me throughout this process. I want to thank Coach Jones for supporting me in whatever I decided to do. Thank my parents for just guiding me and trying to help me make the best decision possible for myself and just thank LSU for giving me this opportunity to come here and have a good season, be a part of this school and this family. As far as next year, I’ve decided that I will come back and play my sophomore year of basketball at LSU and try to help my team.”

HEAD COACH JOHNNY JONES
Opening Statement…
“I can’t tell you how excited we are with the news that Jordan will be a part of our basketball program next year. I think all of you guys realize the impact that he made on our basketball team this year as a freshman. From the defensive end where he was an all-leaguer there, second team all-league. (He was) a player who led our team in field-goal percentage, rebounding and just the impact that he made and what we look forward to next year in what he has an opportunity to bring to our team. I’m glad that along with Jordan and his family, his mom and his dad, to be able to come to a decision like this with all the positive things that are going on out there for him. It says a lot about him that you’re here (Jordan’s father, James Wright), the interest that he’s gained from the professional levels as well says a lot about whom he is, what he’s about and what he’s capable of becoming. We are excited about the process of helping him move forward.”

On how close he was to leaving and how tough of a decision it was…
“Of course, it’s a tough decision determining whether you’re going to go to the NBA or come back. Just basically coming back was the best thing for me to help me to continue to improve my game. I just want to be able to come back and try to help my team win some more games next year.”

On improving on a certain area in particular…
“Just specifically, of course, there are always things you can improve on. Everything can be improved upon so there’s no one specific area. I just want to try to continue to grow as a basketball player and get better.”

On what kind of team he thinks his team can be next year…
“I feel we can be an extremely good team, an NCAA Tournament qualifying team. Definitely with the pieces coming back and guys we have coming in, I’m confident in my team that we can go pretty far next year.”

HEAD COACH JOHNNY JONES
On Mickey’s feedback from NBA teams…
“… Jordan didn’t get an opportunity to visit with those people. They can’t talk to him specifically, but he had a lot of real positive feedback as well from a lot of teams. That’s what you look for, and that’s what’s really important to him to understand where he is. Obviously, they are well aware of him. All those things being considered says a lot. I think he said it right. You’ve got guys in the NBA, be it Kevin Durant or LeBron James, those guys spend the offseason working out to get better. I think he stated it well saying that his improvement – he wants to improve in a lot of areas and continue to get better. I think that says a lot about his maturity as well.”

F JORDAN MICKEY
On if he expected to make a decision to go pro so early in his college career…
“I didn’t. I came in wanting to help my team out best I can, just come in and be a part of a good team. Later on, towards the end of the season, I realized that I probably would have to end up making a decision. I decided to kind of look at some things, weigh my options and that’s what I ended up doing.”

HEAD COACH JOHNNY JONES
On the leadership role Jordan Mickey will play next year…
“I think it’s really important when you look at Jarell (Martin) and Jordan being freshman last year. I know the important roles that they played on their high school teams to get them to championship levels and expect them to step up, take more of that leadership role with our team, stepping out of the shadows of the upperclassmen, coming in as freshmen. I think their leadership is going to be very important for our team moving forward.”