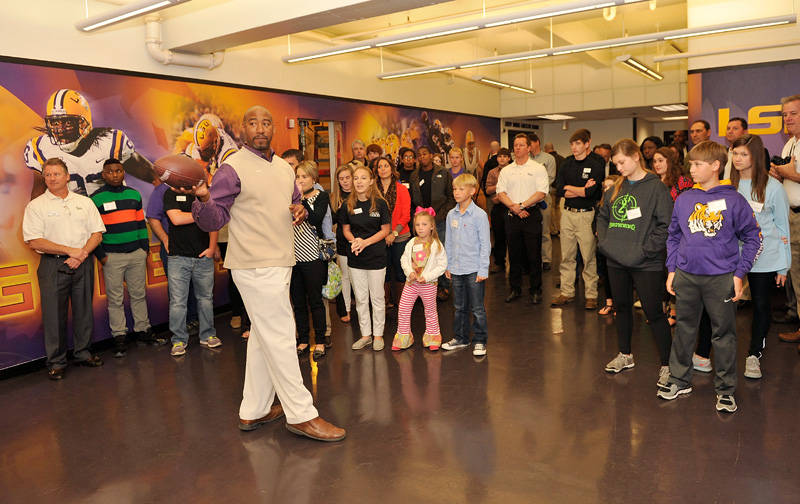 After meeting at the Renaissance Baton Rouge Hotel, they accompanied the Young Heroes for tours of LSU’s Football Operations Center and Tiger Stadium before eating lunch at the Governor’s Mansion. That’s where the group was recognized by Lt. Governor Jay Dardenne before touring the Governor’s Mansion after lunch.

“At first, I thought this day was going to be about the student-athletes inspiring the Young Heroes,” Lee said. “But as the day went on, I realized it was more about the Young Heroes inspiring us. My favorite part during the day was when we got to hear about their stories and some of the struggles they had to overcome at such an early age. Some of the challenges we heard about on that night were truly tragic and there were a lot of teary eyes in the room. I was glad to have the opportunity to hang out with Caroline Beard (Lee’s Young Hero) and be inspired by her determination to overcome the struggles she has faced.”

Louisiana Public Broadcasting and the Rotary Club of Baton Rouge created the Louisiana Young Heroes Awards nearly two decades ago as a way to honor junior high and high school students from grades 7-12 in-state in their pursuit of excellence in the classroom, for serving their community or even demonstrating great courage in overcoming adversity in their own lives.

Students must be enrolled in a Louisiana school or home-schooled in the state and cannot be older than 19 years of age. Prior award winners are not eligible for future awards during the Louisiana Young Heroes Day.