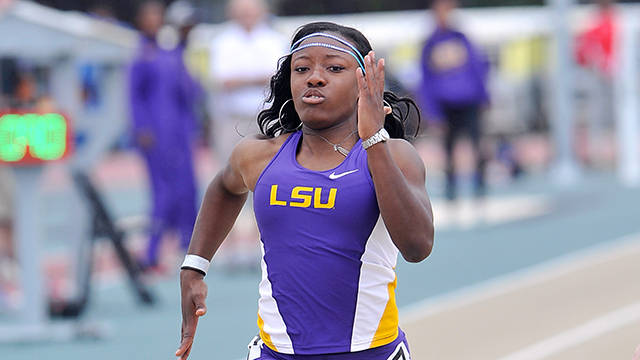 BATON ROUGE – Just one day after opening her 2014 outdoor season at LSU’s “Battle on the Bayou,” sophomore sprinter Jalea Jackson was honored for her performance in the classroom as this year’s recipient of the Jesse Owens Athletic Award at the 29th-annual Black Scholars Award Program held at the LSU Student Union Theater on Sunday, April 6.

The annual program recognizes minority students from each college on campus that demonstrate outstanding performance both inside and outside the classroom.

The Jesse Owens Athletic Award is presented annually to LSU’s minority student-athlete with the highest cumulative grade-point average. Jackson, a sophomore majoring in theatre in the College of Music & Dramatic Arts, has been presented with the award in 2014 after maintaining a 3.65 cumulative GPA during her collegiate career.

“Receiving the Jesse Owens Award was a great honor and blessing. He’s my all-time favorite track athlete, and to receive an award named after a man who broke barriers not only on the track but also in life means the world to me,” Jackson said. “Receiving an award that recognized not only my academics, but my athleticism is an honor. It shows that hard work pays off and that you can excel not only on the field, track, or court, but in the classroom as well. I am very appreciative to the committee and blessed for this award.”

Associate Director and Academic Advisor Erika Lavender nominated Jackson for the Jesse Owens Athletic Award and was in attendance during the program as the Lady Tiger sprinter received the award.

“I am very proud of Jalea and all of her accomplishments that she has achieved on and off the track in such a short time,” Lavender said. “Since joining the track and field team, Jalea has been a pleasure to work with in her time here and is a positive role model to her teammates as well as in the community. She possesses all of the qualities that embodies the words student-athlete.”