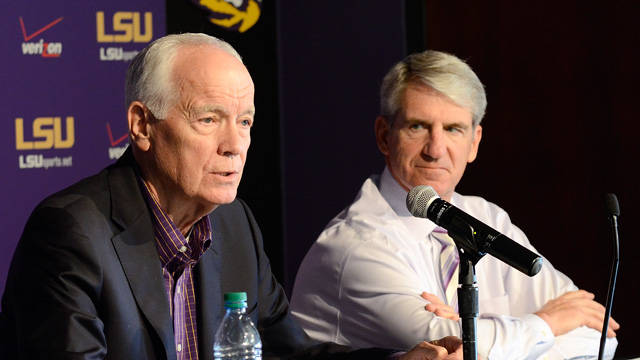 The report, “It’s Not Just Entertainment: The Economic Impact of LSU Sports on Louisiana and The Baton Rouge Metro,” tracks the direct and indirect effects of LSU Athletics on the local and statewide economy.  The study is the third done by Scott on LSU Athletics. Scott’s first report on LSU Athletics was released in May of 1991 with the second in January of 2002.

Scott said that because of LSU sporting events, civic groups in the Baton Rouge area, which assist in running the concession stands at the different venue on campus, pocketed $815,000 in 2012.

“We are partners with the community,” Alleva said. “LSU Athletics has a huge financial impact on the Baton Rouge community.

“Because of that impact, it is really important that we provide a quality fan experience for all of our fans that make this possible; for the previous years, the 92,000 fans that have come and the over 100,000 fans that are soon to come. It is our job in athletics, and the community’s job, to make this experience as pleasant as possible. That includes parking and that includes traffic flow. We have had a traffic study done and we are going to partner with the city and the police to make that experience as seamless as possible.”

LSU has sold out of football season tickets for the past 10 years and an estimated 1.5 million fans come to campus for LSU sporting events each year, making the ease of traffic and parking of paramount importance for the athletic department. With the south side expansion to Tiger Stadium for the 2014 season, LSU will see an additional 8,000 fans in Tiger Stadium each Saturday.

On a statewide level, the impact of LSU sports contributed $331.6 million in new sales to Louisiana firms, which includes $114.7 in new household earnings in the state. Over 3,700 jobs for Louisiana residents can be traced back to LSU Athletics. The LSU Athletic Department is responsible for $8 million in revenue for the state treasury.

From a revenue standpoint in the 2012 fiscal year, the LSU Athletic Department generated close to $98.7 million in direct revenues from areas such as ticket sales, concessions and gift center, and television contracts, with the Tiger Athletic Foundation adding another $56.1 million and LSU sports camps contributing $2 million.

“We cannot do this without our fans,” Alleva said. “We have the greatest fans in the country. We need our fans to have a quality experience when they come to events. In my mind, that is the whole reason for this (study). It also shows that it works both ways: how LSU helps community and how the community helps LSU Athletics”

Scott said that on any given Saturday night during the fall, there are more fans in Tiger Stadium than the number of people living in 49 of the 64 parishes in Louisiana.

Another component of Scott’s study was that of construction spending by LSU Athletics over the past 14 years. Scott said that during the 14-year period, LSU construction spending meant $783 million in new sales at firms in the Baton Rouge area with $250.3 million of that going to household earnings for Metro area residents.

In recent years, LSU has done expansions to the east side and west side of Tiger Stadium, built a new Alex Box Stadium, a new softball stadium, added a basketball practice facility for the men and women, completely renovated the Carl Maddox Field House and added the football operations building. The south side expansion to Tiger Stadium is nearing completion.

Scott’s study showed that construction projects for the LSU Athletic Department over the past 14 years and future planned projects can account for more than one-third of a billion dollars ($393.1 million). The result of this spending is $20.3 million in taxes to the state treasury and $5.8 million in sales taxes in the Baton Rouge Metro area.

The LSU Athletic Department continues to be a self-sustaining entity that relies only on self-generated funds. The LSU Athletic Department receives no tax dollars or money from the state and takes no money from the academic area of the university. LSU also contributes over $7 million annually to the academic side of the university.