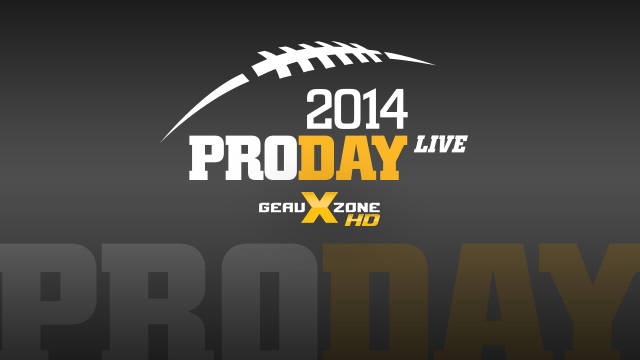 BATON ROUGE – Seventeen players from LSU’s 2013 football team will be on display for the NFL on Wednesday as the school will host its annual Pro Day starting at Noon at the Charles McClendon Indoor Practice Facility.

All 32 NFL teams, including seven head coaches, are expected to be on hand for the workout. The list of head coaches who are expected to be in attendance include Sean Payton (Saints), Marvin Lewis (Bengals), Bill O’Brien (Texans), Rex Ryan (Jets), Mike Zimmer (Vikings), Chip Kelly (Eagles) and Mike Tomlin (Steelers).

“This is one of those days that you look forward to as a coach, to be able to watch your players display their talent and abilities for the NFL,” LSU coach Les Miles said. “As a coach, you watch and pull for your guys to give great effort and perform well. It’s taken a lot of hard work to get to this point, you hope for them to have a great day.

“It’s also a big day for our program as anytime you can have 100 or more NFL scouts and coaches on your campus, it’s a great opportunity to showcase LSU football and our University and the great things that are happening here.”

In addition to the NFL, the NFL Network will be on hand reporting throughout the day. Nearly 150 members of the media will also cover the event.

LSU fans can see video and get up-to-date results for all 20 participants from the event at www.LSUsports.net/proday.

The players will go through a series of testing with the scouts that includes the 40-yard dash, the 225-bench press, vertical leap, broad jump, shuttle run and the 3-cone drill. The players will also have their measurements in height, weight, hand span and wing span taken. Select players will have interviews with team representatives tomorrow as well.

The NFL Draft is scheduled for May 8-10 in New York City and the Tigers are expected to have as many as 10 players selected.