Softball Claims Series Over No. 2 Tennessee, 8-4 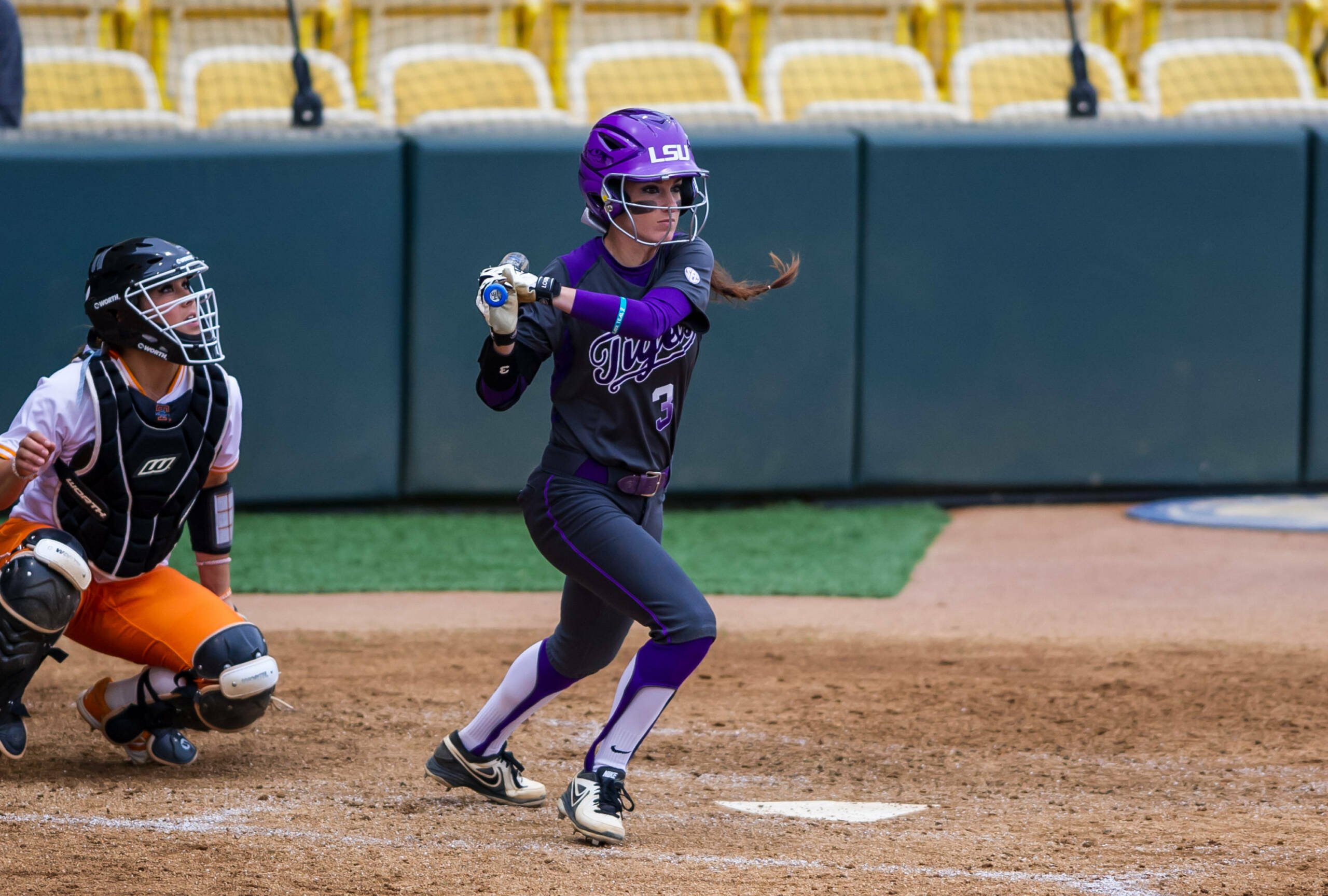 BATON ROUGE, La. – For the second time in as many days, the LSU softball team got to one of the best pitchers in the country early and got key hits at the right time in defeating second-ranked Tennessee 8-4, to claim the team’s first Southeastern Conference series of the season Saturday afternoon at Tiger Park in Baton Rouge.

Earning only five hits on the day, the Tigers (22-15, 4-7 SEC) were the benefactors of four Lady Vol (31-5, 8-3) errors in the game, as only two of LSU’s eight runs were earned against three total Tennessee pitchers. The Tigers had two big innings, earning consecutive three-run frames on a three run error in the fourth and RBI grounder by Sandra Simmons and two RBI single by Allison Falcon to put the game away for LSU after UT got four in the top half of that same inning to pull within one run.

“They did a great job of answering back, and they did that all week long,” head softball coach Beth Torina said. “That is one thing you love to see about your team. It is great to know they are talented, they can hit, they can pitch and do all of those things, but is it way more important to a coach to see if they have fight and an answer back.”

“It’s a confidence booster going back to back days with timely hitting,” Falcon said. “Last night, we had to start it. In that last inning, I was confident in every batter who came up. It is a really good feeling. Hopefully we can carry it into tomorrow and keep it going.”

The win in the circle came from a tag-team effort, as starter Baylee Corbello went 4.1 innings allowing four runs on four hits with four walks and four strikeouts to improve to 11-5 on the season, with Ashley Czechner, yesterday’s game one winner, earning her and the team’s first save of the season in going 2.2 innings and allowing three hits on a walk with two strikeouts.

After taking her first loss of the season last night in a complete-game effort, Tennessee’s Ellen Renfroe fell to 21-2, lasting just 1.1 innings and allowing one run on three hits with a strikeout before getting relieved for Erin Gabriel midway through the second inning. Gabriel was tagged for seven runs, only one earned, on one hit with three walks and a strikeout, as Rainey Gaffin pitched the final 1.2 innings allowing a hit with two strikeouts.

Quinn led off the bottom of the second with a sharp double to left center to lead off the Tiger frame. After a fly out to left field, Falcon dropped one in short center field as Quinn was already rounding third and beat in the throw home to put LSU up 1-0, chasing Renfroe from the game.

A bizarre start to the third inning resulted in a walk to Simone Heyward, as she followed that up with stealing second. After an unassisted grounder by A.J. Andrews to first, Simone Heyward advanced to third and was brought in on the next play by Blades who singled in the infield to put the Tigers on top 2-0.

“It feels so good to execute,” Blades said. “Even if you’re not killing the ball, if you execute you can win that way. It was great to finally put our hits together. That is something we have struggled with for a while.”

Tennessee made things interesting in the fourth, as a hit batter, single to left field and fielder’s choice loaded the bases for the Lady Vols with no outs on the board. A big strikeout looking for Corbello gave UT its first out, as Quinn threw out the lead runner at home on a grounder to short for the second. Corbello would need just four pitches to close the door with a strikeout to keep UT without a score through three.

Bianka Bell reached on error at short to open the bottom of the fourth, with Quinn putting down a sacrifice bunt to advance the LSU shortstop to second base. Simmons reached first on a catcher’s interference call to put two on as another walk, this time to Falcon, loaded the bases for the Tigers. Coming on to pinch hit, Kailey McCasland drilled a shot that went through the legs of the second baseman on the error and into right field scoring all three runs and advancing all the way to third to give the Tigers a five-run advantage.

Tennessee got a single and walk, with a fly out and another walk loading the bases full of Lady Vols. One more free pass that scored UT’s first run would be the last batter for Corbello as Czechner came on in relief, getting the first batter to ground out to short for the out at first to score UT’s second run and single to center scoring two more to make it 5-4, but closed with a strikeout to put a stop to the Lady Vol scoring.

Another error for Tennessee at shortstop, allowed Blades to reach first as Sahvanna Jaquish used a sacrifice bunt to advance the left fielder to second. Bell got plunked and Quinn walked to load the bases, forcing a Tennessee to use its third pitcher of the day. After a long at-bat by Simmons that featured eight-straight fouled off pitches, the first baseman got the job done grounding out to second to score Blades to make it 6-4 LSU. Falcon connected on her second big hit of the day on a single to right, plating both Bell and Quinn under the tag to extend the lead to four to push the lead to 8-4.

LSU closes out the series against the Lady Vols on Sunday at noon for Bark in the Park at the field.

On LSU’s productive hitting performance this series against Tennessee
“Hopefully, they are getting some more confidence. The right people are stepping up and getting it done. Hopefully every time we have that happen we are getting more and more confident about it.”

On answering back to Tennessee’s rally in the fifth inning…
“They did a great job of answering back, and they did that all week long. That is awesome. That is one thing you love to see about your team. It is great to know they are talented, they can hit, they can pitch and do all of those things, but is it way more important to a coach to see if they have fight and an answer back.”

On competing with Tennessee and other SEC teams…
“It is great we are competing with Tennessee. I truly believe this team can compete with anyone in the entire country. Right now a win is a win. We have to make sure we are winning every game we possibly can. Whether it is an in-state opponent, SEC opponent, or whatever it is, we have to make sure that we are winning every opportunity we get.”

On Constance Quinn’s first career start at short stop…
“She is such a talented kid. I wish we could find a spot for her to play more often. She deserves to play regularly. She is extremely talented and so athletic. You can see it even when she didn’t catch that ball, but jumping as high as she did. She is an amazing player. The future of this program is bright knowing that she is going to be a starter for the next three years. Hats off to the middle infielders who have made it so tough for her to get out there all year long. She is really talented, and we are happy she is here.

On stringing together timely hits…
“It’s a confidence booster going back to back days with timely hitting. Last night, we had to start it. In that last inning, I was confident in every batter who came up. It is a really good feeling. Hopefully we can carry it into tomorrow and keep it going.”

On winning the series against No. 2 Tennessee
“Right after the game last night, we brought it to Coach’s attention that my class has never beaten Tennessee. To have a series win against them is a great feeling. Hopefully tomorrow we can come out and get the sweep.”

On executing offensively against Tennessee…
“It feels so good to execute. Even if you’re not killing the ball, if you execute you can win that way. It was great to finally put our hits together. That is something we have struggled with for a while.”

On winning the series against No. 2 Tennessee
“We have been waiting for our big break through. We have lost a lot of close games or games at the very end. It is so good to remember how to win again and know what it feels like. We are really excited, and it’s a really good atmosphere right now.”

On coming out tomorrow to sweep Tennessee…
“It always feels good to win, but we need all the wins we can get. Tennessee is a great team. We can’t come out here tomorrow thinking we have it. I think it is good to know we won, but we have to go even harder tomorrow.”