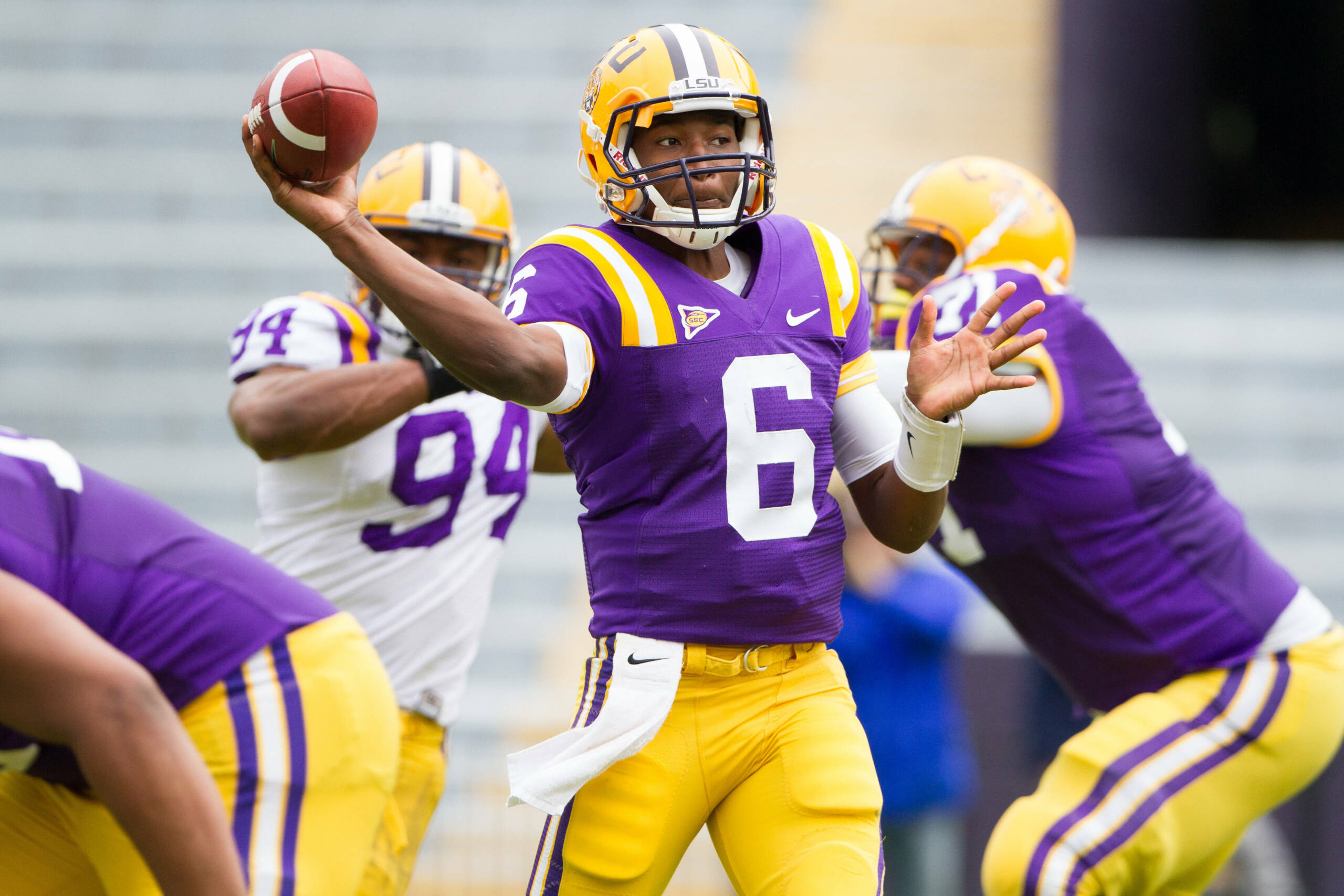 BATON ROUGE – The LSU football team put together a balanced offensive attack, and the defense returned two interceptions for touchdowns as the White team garnered a 42-14 victory over the Purple team Saturday in LSU’s National L-Club Spring Game presented by Tony Chachere’s at Tiger Stadium.

In total, LSU racked up 622 yards on offensive which included 399 yards through the air on 49 pass plays, as 18,565 fans gathered for the annual end-of-spring scrimmage. Multiple players saw action for both teams throughout the contest, and the second half featured a running clock.

Freshmen quarterback Brandon Harris was 11-of-28 for 195 yards and tossed three touchdowns during the second quarter. He also led LSU’s rushing attack with 75 yards on six carries and added a rushing score in the second half.

Rising sophomore signal-caller Anthony Jennings completed 9-of-17 passes for 157 yards and a touchdown. Hayden Retting also added a 47-yard pass in the second half.

On the ground, Kenny Hilliard accounted for 16 carries on 59 yards and a touchdown followed by fullback Melvin Jones’ 12 carries for 38 yards.

The Purple team opened the scoring midway through the first quarter as Jones jumped an out route and raced 67 yards with an interception return for a touchdown.

The White team responded with 28 unanswered points during the second quarter. Harris tossed the first of his three TD passes on a third-and-9 play when he found Smith over the middle for a 19-yard scoring strike to even the score at 7-7.

On the next series, Harris orchestrated an 11-play, 72-yard march which culminated with a 5-yard TD pass to fullback Conner Neighbors out of the backfield. Key plays on the series were a 29-yard pass to Dural and a 41-yard scamper by Harris.

Alexander extended the White team’s lead to 21-7 on a 26-yard interception return for a touchdown.

Harris executed an 80-yard drive over the final three minutes of the half which featured a trio of third down conversations. He found Dural for a 21-yard touchdown on a fade route in the corner of the endzone on the final play to make it 28-7 White at halftime.

The White team struck again on its opening possession of the second half to push its lead to 35-7, Jennings found Dural for a 13-yard touchdown to cap an efficient 4-play, 73-yard drive. Jennings also had a 24-yard and 42-yard completions to Dural and Hilliard, respectively.

The Purple team responded with its second touchdown of the game. Harris found wide receivers Rob Bolden and John Diarse for 37-yard and 33-yard completions and found the endzone from 4-yards out to pick up his fourth touchdown of the day.

The White team finished the scoring on a Hilliard 3-yard touchdown plunge at the 7:15 mark of the fourth quarter. He reeled of 28 yards on six carries to cap the drive after a Retting found Dural for a 47-yard passing play for the final tally of 42-14.

LSU embarks on the 2014 campaign when the Tigers square off with Wisconsin for the AdvoCare Texas Kickoff held in Reliant Stadium, home of the NFL’s Houston Texans, on Aug. 30.

ICYMI: New LSU Tiger head was on our helmets today. Side-by-side comparison of old (since 1972) and new. pic.twitter.com/rxgEScaRLo

Below is the list of the 2014 spring season award recipients which were handed out on the field after today’s game.

Opening Statement
“I really think the Spring Game went as it should have gone. It felt liked defensively were a little “vanilla” if you will. It was a very productive day. It felt like certain guys tackled well, but we didn’t rush the football well. The defense, even though we gave up a lot of points, gave up about 200 yards on the day. It felt like the receiving core played pretty well. Travin Dural had a hell of a day with a couple of nice receptions and a couple of big plays. Anthony Jennings started out with a couple of misthrows, and it was a great opportunity to play beyond adversities. He did so. Brandon Harris made some good plays. He threw the ball at times extremely well. There’s some real optimism surrounding the (quarterback) position right now. We made a couple of nice plays today, but in the same vein there were some mistakes made that need to be corrected on both sides. We’re going to let the competition continue and see how this thing plays out. It serves us to say that there’s some talent at that spot. We really think that we’ll develop quite nicely. We didn’t run the football as well as we’d like, but the defense tackled and played well. At the end of the spring with the Spring Game, this is just what we need.”

On Brandon Harris’ play at quarterback…
“I think that things that you do in a game certainly are things you must recognize. He made some really big plays and nice passes, but he also made some mistakes. It was certainly reviewed very positively by us. We’re a ways away, but there needs to be improvement in both spots. I really think he made four to five major errors in the scrimmage, but he improved through the adversity. If we can eliminate the mistakes and play to the advantages, that’s what he’s looking to do. We think that both guys are pretty good, and we would like to think that they would continue to improve and be well beyond where they are today. I think both guys are good enough to be our quarterback. At times, I think the two guys played better than that in the spring. I think the game itself was a little more emotional because it was in the stadium.”

On the wide receiver position…
“I’m going to have to see the film and see John Diarse and how that played out. He slowed a little bit by spring injury. We’re going to have to see who played. I think there’s several guys in that group that can step up and play. Three or four didn’t fix themselves for the offense. We couldn’t fit them in backup roles and sometimes primary roles.”

On Anthony Jennings’ two interceptions…
“I think when we throw a menu of plays that we’ve thrown all spring long and then we limit the menu, I think there’s a pretty consistent theme to the defense to intercept some of these throws. In a game, we won’t necessarily need to repeat the throws that we repeated even today. I understand the mistakes that were made. Certainly, we would all coach against it. I’m not ready to be defining in anyway.”

On Danielle Hunter…
“I think he’s a very talented guy. I think he has range and speed. The more snaps he gets, the more significant he’ll be and the more impact he’ll give us in the fall. I think he’ll start fast and finish fast.”

On his play today…
“I came out and tried to do the best I could.  I tried to get my team the win.  I tried to improve on the things I wasn’t doing well.  I had two interceptions in this game.  I wish I had those back, but you can’t take them back.  I just had to overcome adversity. I came out in the second half and tried to score a touchdown.  If you throw an interception and you don’t come right back, you aren’t a good quarterback.  Every quarterback goes through adversity. It’s about how you respond, not how you fall.”

On his competition with Brandon Harris…
“The competition brings out the best in everybody.  He pushed me to do better, and I pushed him to do better.  He did a great job this game.  He made a lot of great plays with both his feet and his arm.  I commend him for doing those things.”

On what the team should work on over the summer…
“Timing – we have to get our timing and our depth down.  We need to be consistent. We would have a good day and then two bad days –just working on our timing and being consistent.”

On his personal off season improvements…
“I’d say being a leader – just stepping up and making the plays I know I can make.  Just being a leader and showing everybody what I can do.”

On what he saw in Brandon Harris and Anthony Jennings today…
“Brandon showed signs of being great, so did Anthony.  Every quarterback has games where he throws an interception or two so you can’t really hold that against him.  I’d say both of them had a decent spring and a pretty good Spring Game.”

On the game today…
“We just came out, handled our business and did what we had to do.”

On the new stadium…
“It’s going to be tough on our opponents.  Hopefully when we start September 6, it will be rocking.”

On being a veteran running back…
“It’s our job as returners to continue the legacy in the backfield –just come out and play hard each and every day.”

On what he has seen from the young players this spring…
“I have seen a lot. At practice, everybody was in it together. Everybody is learning the plays and doing a great job. The sophomores and everyone have gotten it together. [Brandon Harris] did a great job on the deep ball. He and Anthony [Jennings] are battling right now. Whoever gets the job will do a great job. They are two good quarterbacks.”

On the call leading to his interception…
“It was a drop back, and I knew he was going to run a five-yard out. That’s what learning all the plays will get you.

On the call leading to his interception…
“Coach (Chavis) called the right coverage. I just kind of sat on it, and let the ball bring me down. When he checked down, I just broke on the ball.”

On the team’s mentality at this point in the season…
“We push each other every day and try to get better at the little things. Today, that paid off. Right now, it’s time for us to get better – get rid of our nicks and bruises. We need to keep getting better during the offseason. It doesn’t stop right here. We have a long season ahead of us, and we have to work hard.”

On his role this season versus last season…
“I’m real comfortable here. Last year was my fault because I didn’t really try to learn the system. Now I put myself in the playbook, and I have my fellow linebackers out here helping me with Coach Chavis along with people like Lamin (Barrow) being a big brother and helping me out. I’m starting to get it.”

On his ability to rush the passer…
“It’s just going out there, doing what the coaches tell me to do and working together with the whole defensive line. All that was going through my mind was focusing on either bringing them up in the pocket so the tackles can get the sack or communicating with my teammates to get to the quarterback.”

On what the defense can improve heading into the fall…
“We came together as a defense and found out if nobody can run or pass on us. This summer, we will hit the offseason hard and take care of our business to be ready for the first game. Individually, we all need to focus on getting stronger in the weight room. Together, we need to focus on our run technique and pass get offs in the offseason.”