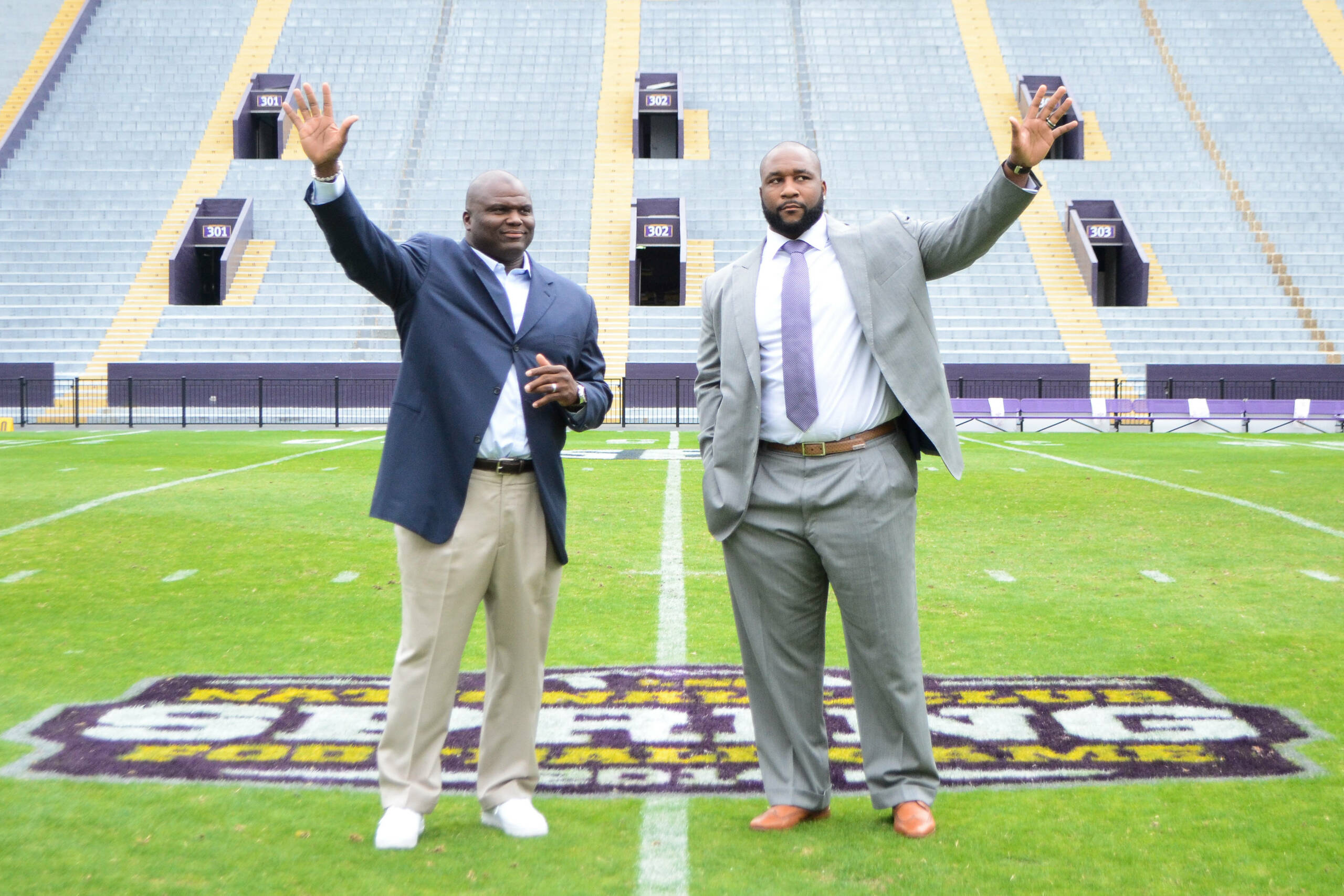 by The SEC Network

The SEC Network, ESPN’s 24/7 network devoted to the Southeastern Conference, has hired LSU legends Anthony “Booger” McFarland and Marcus Spears as college football analysts. The All-American SEC standouts and first round NFL draft picks will provide insight into games, teams and players on the network when it launches Aug. 14, 2014.

“The addition of Booger and Marcus extends the depth of our commentator bench even further with both on-field experience and a defensive line perspective,” said  Stephanie Druley, ESPN vice president, production of college networks. “Booger brings a built-in knowledge of the conference as a former player and proven success covering sports with a diverse opinion.”

Druley continued, “Marcus’ personality and passion for the conference will be both entertaining and insightful for SEC fans.  His SEC roots make the new network the perfect place for him to start his television career.”

McFarland joins ESPN after hosting a popular sports radio show in Tampa Bay, Florida since 2012. He is a beloved figure in both Tampa Bay and Louisiana, where he grew up, and was a fiercely feared defensive tackle during his three years in the SEC (1995-98). Drafted by the Tampa Bay Buccaneers in the first round of the 1999 NFL Draft, he was a main fixture on their menacing defensive line for seven years, winning a Super Bowl under then-head coach Jon Gruden. McFarland went on to win a second Super Bowl with the Indianapolis Colts before retiring in 2007.

“I think the SEC is the best conference in the country with the best fans,” said McFarland.  “I look forward to covering it from a variety of angles for the SEC Network when it launches in August.”

Spears also hails from Louisiana, and was a highly sought after two-sport athlete from Baton Rouge, recruited for both basketball and football. He played tight end, fullback and defensive end for LSU’s football team under Nick Saban from 2001-04. During his sophomore year he became a full-time defensive player and his contributions to the team helped lead the Tigers to two SEC Championships titles (2001, 2003) and a BCS National Championships (2004) win. Spears was drafted in the first-round of the 2005 NFL Draft by the Dallas Cowboys and played defensive end in the league for eight years.

“SEC football is in my blood it is literally as much a part of my life as anything else. I’ve always appreciated the dedication of the fans and the talent of the players in the Southeastern Conference,” said Spears. “I plan on bringing a wealth of football knowledge and explaining it in a way for fans to understand the game better. I want it to feel like I am sitting in the living room with our fans debating and sharing knowledge. Football has been my life for most of my life and I am thankful for the opportunity ESPN has given me to keep me around the game.”

The SEC Network, a multiplatform ESPN network devoted to the Southeastern Conference, will air 45 college football games next year, in addition to an array of daily studio shows providing in-depth commentary on all 14 SEC teams. AT&T U-verse, DISH and NRTC have agreed to carry the network. Additional ESPN and SEC Network college football announcements will be made in the coming weeks. More details and recent news surrounding the soon to launch network can be found here.

About SEC Network
The Southeastern Conference and ESPN have signed a 20-year agreement through 2034 to create and operate a multiplatform network which will launch in August 2014. The new network and its accompanying digital platform will air SEC content 24/7 including more than 1,000 events in its first year. The network will televise approximately 45 SEC football games, more than 100 men’s basketball games, 60 women’s basketball games, 75 baseball games, and events from across the SEC’s 21 sports annually. Programming will also include studio shows, original content such as SEC Storied, spring football games, signing day and pro days coverage. Hundreds of additional live events from various sports will be offered exclusively on the digital platform. AT&T U-Verse, DISH and National Rural Telecommunications cooperative (NRTC) have agreed to carry the SEC Network.