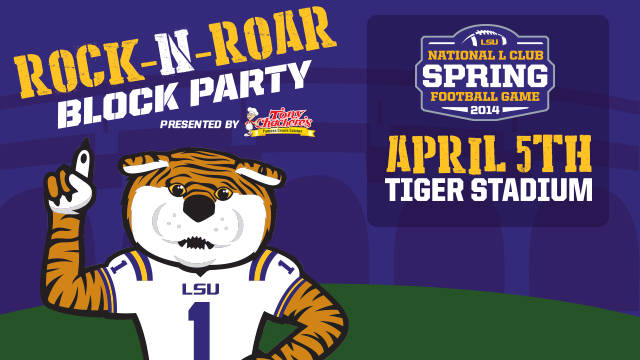 BATON ROUGE — LSU will conclude the contact portion of spring practice on Saturday as the Tigers will take part in the annual National L Club Spring Game presented by Tony Chachere’s at 1 p.m. CT in Tiger Stadium.

The spring game, which will feature the White team against the Purple team, will be played under normal game conditions for the first half, followed by a running clock in the third and fourth quarters. There will be no live special teams as all special teams snaps will be controlled with no tackling.

Following Saturday, the Tigers will have one final spring practice session, a walk-through on next Tuesday afternoon.

“We are looking forward to some good competition on Saturday,” LSU coach Les Miles said following Thursday’s practice. “We will do the best we can to make it as game-like as possible. We’ve made a lot of progress this spring. It will be fun to see how some of the young guys respond to playing in Tiger Stadium in front of a crowd.

“I anticipate that there will be plenty of snaps and a lot of big plays.”

The White team will be made up mainly of what is considered the No. 1 offense and defense and will be led by sophomore quarterback Anthony Jennings and senior running backs Terrence Magee and Kenny Hilliard.

Fans will get their first glimpse of freshman quarterback Brandon Harris as he will start for the Purple offense. Harris will be joined on the Purple squad by fellow early-enrollee Ed Paris Jr., who will play cornerback.

Other players to keep an eye on for the Purple team include linebacker Kendell Beckwith, wide receiver John Diarse, and running back/fullback Melvin Jones.

Miles said the specialist will rotate between both the Purple and White teams. In addition, several offensive linemen, including center Ethan Pocic, and guards Hoko Fanaika and Evan Washington, will spend time with on each team.

“We are trying to make the game as competitive as we can,” Miles said. “We are thin in numbers at some positions and we want to see different combinations on the line so we will rotate some players around.”