Track & Field to Host Fourth 'Battle on the Bayou' 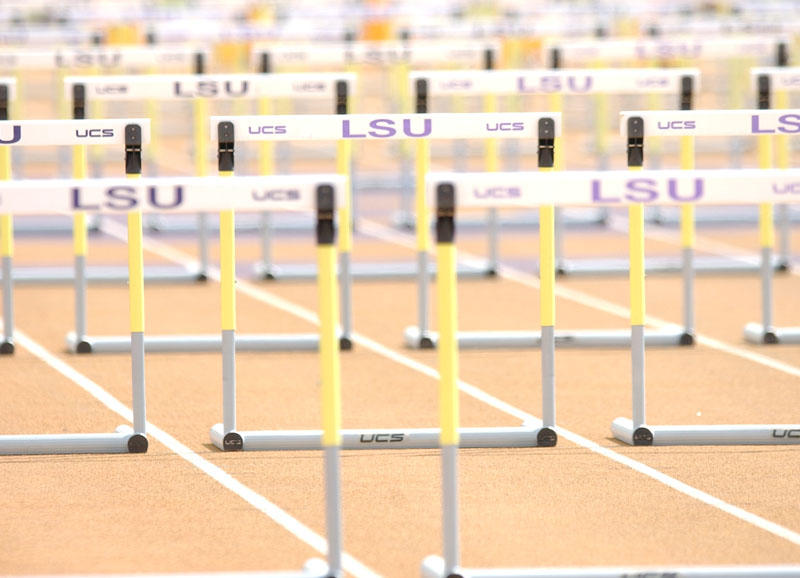 BATON ROUGE – The LSU Track & Field program will welcome four teams from across the country to Baton Rouge this weekend as nationally-ranked Kansas, Mississippi State, Ohio State and UCLA take part in LSU’s annual scored meet with the fourth-annual “Battle on the Bayou” running Saturday at the Bernie Moore Track Stadium.

The afternoon session is scheduled to begin at 1:30 p.m. CT following a brief opening ceremony with the team champions being crowned following the 4×400-meter relays at approximately 4:30 p.m.

The morning session is set to start at 10 a.m. with the women’s javelin on the East runway and the men’s javelin on the West runway, while the field events will continue through the men’s triple jump at 3:15 p.m. This year’s “Battle on the Bayou” features free admission as fans are welcome to join the Tigers and Lady Tigers at the Bernie Moore Track Stadium throughout the competition.

Teams of both genders will be competing with a 10-8-6-4-2-1 scoring format as the top six places in each individual event. A scoring format of 10-8-6-4-2 will be used for the relay events as only five places will be scored in the relays and only one relay team from each university will be allowed to score in both the 4×100-meter and 4×400-meter relays.

The Tigers and Lady Tigers have swept the men’s  and women’s team titles at the “Battle on the Bayou” in each of the last two seasons while defending their home turf at the Bernie Moore Track Stadium.

The Lady Tigers have cruised to the team championship in each of the last two seasons with their winning totals of 157.5 points in 2012 and 188 points in 2013. Mississippi State was the second-place team in the women rankings two seasons ago with 115 points, while the Penn State women made it a sweep of second-place finishes for the Nittany Lions a year ago with 139 points scored during the competition.

The 2013 outdoor season was certainly one for the record books in the history of the Kansas program as the Jayhawk women won the school’s first national championship in track and field with their stunning victory at the 2013 NCAA Division I Outdoor Track & Field Championships held at Oregon’s Hayward Field on Eugene, Ore.

And they did so in dominating fashion by piling up 60 points during the meet to finish 16 points clear of their nearest competitor. The Kansas women won the 2013 NCAA Outdoor crown over a host of collegiate powers that includes Texas A&M in second place with 44 points, Oregon in third place with 43 points and LSU in fourth place with 40 points in the final women’s team standings.

The Jayhawk women will open defense of their national championship as the No. 10-ranked team in the country in the USTFCCCA Top 25 preseason power rankings released last week.

Mississippi State and Ohio State also feature national championship contenders in their squads as they join an outstanding five-team field at the “Battle on the Bayou” in Baton Rouge this weekend.

Live results of this year’s “Battle on the Bayou” can be found online by logging onto the official website of LSU Athletics at www.LSUsports.net. Fans can also receive live scoring and live event updates during the event by liking LSU Track & Field on Facebook at http://facebook.com/lsutrackfield and by following @LSUTrackField on Twitter at http://twitter.com/lsutrackfield.

Twitter users are invited to join in the conversation by not only following @LSUTrackField, but also using the Twitter hashtag #BayouBattle in their tweets during Saturday’s competition.

After hosting the “Battle on the Bayou” on Saturday afternoon, the Tigers and Lady Tigers will spend Spring Break on South Beach as they head to Miami, Fla., to compete at this year’s Hurricane Alumni Invitational that will be held on Saturday, April 12, at Miami’s Cobb Stadium. They will then return home on Saturday, April 19, to play host to their annual LSU Alumni Gold meet at the Bernie Moore Track Stadium.