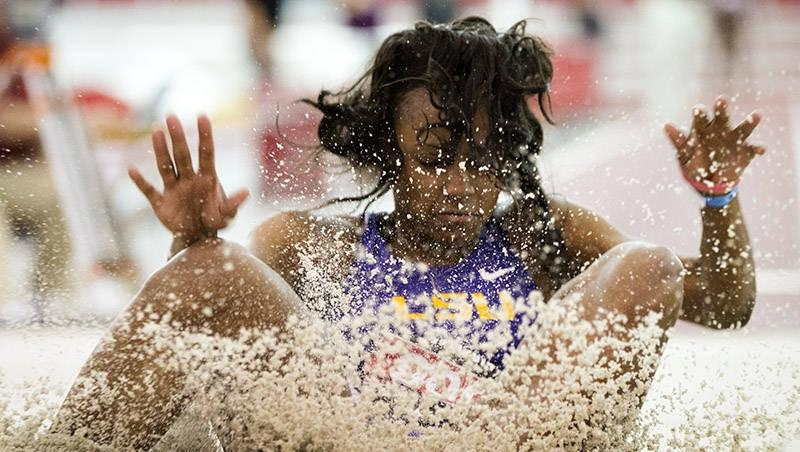 BATON ROUGE – As members of the LSU Track & Field program prepare to host the likes of Kansas, Mississippi State, Ohio State and UCLA in Saturday’s scored meet at the fourth-annual “Battle on the Bayou,” the Tigers and Lady Tigers are expecting an impressive field of athletes to compete at the Bernie Moore Track Stadium.

The afternoon session is scheduled to begin at 1:45 p.m. CT following a brief opening ceremony. The team champions will be crowned following the running of the 4×400-meter relays at 4:30 p.m.

Teams of both genders will be competing with a 10-8-6-4-2-1 scoring format as the top six places in each individual event. A scoring format of 10-8-6-4-2 will be used for the relay events as only five places will be scored in the relays and only one relay team from each university will be allowed to score.

Listed below are the events that are sure to decide the men’s and women’s team champions in the meet as they feature many of the NCAA’s top athletes with All-America aspirations during the 2013 outdoor season.

Key Matchups at the fourth-annual “Battle on the Bayou”
Note: Events are listed in chronological order according to final time schedule.

Men’s Javelin – 10 a.m.
This year’s “Battle on the Bayou” kicks off with a bang as Ohio State All-American Bill Stanley headlines the field in the men’s javelin throw that is scheduled to begin at 10 a.m. on the West runway. Stanley is the second-highest finisher at the 2013 NCAA Division I Outdoor Track & Field Championships returning to the collegiate ranks for the 2014 season after he earned All-America honors with a fourth-place finish nationally for his freshman season at Ohio State. Stanley, who owns a personal-best throw of 246 feet, 10 inches, is already off to a fast start to his 2014 season as he is the NCAA’s No. 5-ranked javelin thrower with a season opener of 244-0 at Vanderbilt last weekend. LSU’s Jeremy Tuttle will provide a strong challenge to Stanley as he boasts a personal best of 227-6 in the event.

Men’s Discus – 11:15 a.m.
The events at this year’s “Battle on the Bayou” don’t come any more star-studded than the men’s discus throw as fans will have the opportunity to watch LSU’s junior All-American Rodney Brown battle UCLA’s two-time NCAA discus champion Julian Wruck for top honors on Saturday afternoon. Wruck is certainly one of the more dominant athletes in collegiate track and field in recent seasons as the collegiate-record holder in the men’s discus with his PR of 223-7 during the 2013 regular season before claiming the NCAA title for the second time in his career. Wruck actually posted the top 27 throws by collegians in the discus last season in what is sure to remembered as one of the dominant seasons by a thrower in NCAA history. Brown has NCAA title aspirations of his own after earning All-America honors with a fourth-place finish in his debut at the NCAA Championships a year ago. He has already raised his PR to 206-5 at the Texas Relays last weekend to rank No. 3 in the NCAA rankings for the 2014 outdoor season.

Women’s Long Jump – 1:30 p.m.
Three qualifiers into the women’s long jump competition at the 2014 NCAA Division I Indoor Track & Field Championships in Albuquerque, N.M., will step onto the runway again Saturday as LSU’s Nataliyah Friar, UCLA’s Kylie Price and Kansas’ Sydney Conley headline the field. Conley was the top finisher of the group at this year’s NCAA Indoor Championships as she earned All-America honors with a fourth-place finish, while she owns a lifetime best of 20-10 in the event. Friar qualified for the long jump final in her NCAA Championships debut with the Lady Tigers as she took home a ninth-place finish during the competition. Friar leaped to her career best of 20-8 during the 2014 indoor season. Price is perhaps the most accomplished long jumper in the group as she will compete at the “Battle on the Bayou” with a personal best of 21-1 ½. The Bruin standout has won All-America honors outdoors in each of the last two seasons while placing seventh as a freshman in 2012 and sixth as a sophomore in 2013 at the NCAA Outdoor Championships.

Men’s Pole Vault – 2 p.m.
Two 18-foot vaulters are sure to go head-to-head for the men’s pole vault title as UCLA’s Michael Woepse and Kansas’ Casey Bowen are two 18-footers who will be competing Saturday afternoon. After capturing the NCAA Outdoor silver medal in the pole vault as the national runner-up in 2012, Woepse raised the bar with a personal best of 18-4 ½ during the regular season before a second-straight All-America honor last season when he placed seventh nationally at the NCAA Outdoor Championships. Bowen is one of the NCAA’s rising stars in the event as he has already cleared the 18-foot mark during the 2014 outdoor season with a best of 18-0 ½ at the Texas Relays last weekend. Junior Andreas Duplantis is the top LSU Tiger in the men’s pole vault field as he owns a lifetime best of 17-9 ¼ and an outdoor best of 17-7 in the event.

Women’s 100 Hurdles – 2:05 p.m.
LSU fans will only have three more opportunities to watch Lady Tiger senior Jasmin Stowers in action at the Bernie Moore Track Stadium during her collegiate career as she will make her 2014 home debut Saturday with an appearance in the women’s 100-meter hurdles. Stowers is coming off a 2014 indoor season in which she smashed LSU’s school record in the 60 hurdles with a lifetime best of 7.96 to win the NCAA Indoor bronze medal for the second-straight season, and is looking to add the outdoor record to her resume in her final season in the purple and gold. A six-time All-American in the hurdles during her career, Stowers will run with an impressive PR of 12.88 in the event. UCLA’s Brea Buchanan will be a formidable foe as a former NCAA Championships qualifier with a personal best of 12.77. Two hurdlers on the cusp of breaking 13 seconds for their careers are Mississippi State’s Keisha Wallace and UCLA’s Trinity Wilson. Wilson is a former No. 1-ranked high school hurdle recruit in the Class of 2012 with a personal best of 13.15, while Wallace is not far behind with a personal best of her own at 13.16. The women’s 100 hurdles will also feature the reigning NCAA heptathlon champion as Kansas junior Lindsay Vollmer will also line up in the event.

Men’s 110 Hurdles – 2:15 p.m.
While he won’t be competing in his favored 400-meter hurdles as a two-time All-American in the event, Kansas standout Michael Stigler will feature in the field for the men’s 110-meter hurdles on Saturday as he continues his 2014 outdoor season. This marks the first time this season that Stigler will run the 110 hurdles for the Jayhawks as he is the reigning NCAA Outdoor silver medalist in the 400 hurdles from a season ago. The competition features an All-American from the 2014 indoor season as Ohio State’s Donovan Robertson placed seventh nationally in the 60-meter hurdles at the NCAA Indoor Championships just a few weeks ago. Robertson’s Ohio State teammate, Demoye Boyle, will also line up on Saturday after tying Robertson as the NCAA’s No. 4-ranked sprint hurdler during the regular season indoors in 2014 with a seasonal best of 7.65. The field also features UCLA’s All-American decathlete Marcus Nilsson, who was the NCAA Outdoor bronze medalist in the 10-event competition a year ago.

Men’s 400 Meters – 2:25 p.m.
LSU’s All-American duo of Quincy Downing and Darrell Bush are set to open up in the 400-meter dash this outdoor season on Saturday as they are sure to battle one another for the event title at this year’s “Battle on the Bayou” meet. Downing is a two-time NCAA semifinalist in the 400-meter dash, including a year ago when he raced to a personal best of 45.87 for 10th place in his debut at the NCAA Outdoor Championships in Eugene, Ore. Downing followed this season with another 10th-place finish in qualifying at the NCAA Indoor Championships just a few weeks ago. Bush joined Downing in the 400-meter field at the NCAA Indoor meet in Albuquerque, N.M., where he placed 12th nationally in the qualifying round. They were also among the four Tigers crowned NCAA Indoor champions in the 4×400-meter relay to wrap up the 2014 indoor season. UCLA’s Pete Lauderdale enters the weekend as the NCAA’s No. 4-ranked 400-meter runner for the 2014 outdoor season as he has already run a seasonal best of 47.08 this spring.

Women’s Triple Jump – 3 p.m.
A trio of Lady Tigers will compete with All-America aspirations in the triple jump this outdoor season, and they will headline what is sure to be an exciting competition in their outdoor openers in the event on Saturday. Senior Lynnika Pitts is coming off the 2014 indoor season in which she earned All-America honors for the second-straight year with a bronze-medal-winning performance at the NCAA Indoor Championships. Pitts had a career-best performance at the SEC Indoor Championships when she joined the 44-foot club with a mark of 44-0 ¾. Fellow senior Keri Emanuel is still working her way back from offseason knee surgery as she looks for the form that earned her All-America honors as a junior during the 2013 indoor season. Emanuel is also a 44-foot jumper for the Lady Tigers with a career-best of 44-2 also set in 2013. Freshman Nataliyah Friar will jump in both the long jump and triple jump on Saturday with lifetime bests of 20-8 and 41-3 ¾ in the events, respectively.

Women’s 200 Meters – 3:15 p.m.
Saturday’s competition will give the Tigers and Lady Tigers the opportunity to run the 200 meters for the first time this outdoor season. Freshman Jada Martin will set the pace for the Lady Tigers in the women’s final as she makes her collegiate debut outdoors in the event. Martin joined the Lady Tigers with a PR of 23.65 she set during her high school career, while she is coming off a 2014 indoor season in which she raced to an indoor PR of 23.85 in her debut season at LSU. The women’s 200-meter dash at this year’s “Battle on the Bayou” will also feature former NCAA 400-meter champion Diamond Dixon of Kansas. Dixon, who will not be running in the 400 meters this weekend, is a 12-time All-American as one of the top quartermilers returning to NCAA Division I track and field for the 2014 season. Dixon is a former NCAA Indoor champion and two-time NCAA Outdoor bronze medalist in the longer 400-meter sprint during her collegiate career. Also scheduled to run Saturday is former Kansas All-American Paris Daniels.

Men’s 200 Meters – 3:20 p.m.
While LSU’s Darrell Bush and Quincy Downing will both be opening up in the 400 meters on Saturday, LSU’s NCAA Indoor 400-meter silver medalist Vernon Norwood will be lining up in the 200-meter dash at the “Battle on the Bayou” as he continues what has already been an outstanding debut season with the Tigers in 2014. Norwood set a lifetime PR of 45.39 in the 400 meters indoors en route to finishing at the NCAA runner-up this season, while also anchoring the Tigers to the NCAA Indoor title in the 4×400-meter relay. The Morgan City, La., native has run the 200-meter dash sparingly during his collegiate career, running a wind-legal PR for 20.93 while running for South Plains College. Ohio State’s Timothy Faust will line up against Norwood following a 2014 indoor season in which he was the NCAA’s No. 10-ranked 200-meter sprinter in the regular season with a seasonal-best time of 20.77. Former Tiger All-American and Olympic 100-meter silver medalist Richard Thompson is also a favorite to take the men’s 200-meter title during Saturday’s meet.