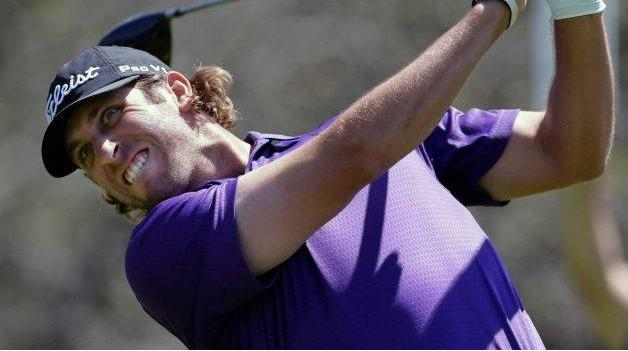 BATON ROUGE – Former LSU All-American Andrew Loupe teed off in the final group in Sunday’s final round at the 2014 Valero Texas Open and earned his first career top-10 finish in a PGA TOUR event when he tied for fourth place on the final leaderboard with a 72-hole score of 6-under par 282 in the event held at the JW Marriott TPC San Antonio.

Loupe actually teed off in the final round in a tie for second place on the leaderboard, trailing only Australian Steven Bowditch by three shots as they played together in the final group of the day.

Loupe followed rounds of 5-under 67 on Thursday and back-to-back rounds of 2-under 70 on Friday and Saturday with a 3-over 75 in Sunday’s final round to tie American Matt Kuchar for fourth place for his first career top-10 finish in his eighth career PGA TOUR start. That performance also earned Loupe a $272,800 payday for an outstanding weekend of play.

The Baton Rouge native and Episcopal High School product now cracks the Top 100 on the PGA TOUR Money List for 2014 with $396,660 in earnings to date this season.

Despite finishing the tournament with a 4-over 76 on Sunday, Bowditch ended with a 72-hole score of 8-under par 280 for a one-shot victory over Will MacKenzie and Daniel Summerhays in a tie for second place at this year’s Valero Texas Open. Loupe and Kuchar finished two shots off the pace in a tie for fourth place to round out the Top 5.

Loupe’s top-10 finish at the Valero Texas Open this past weekend earns him a spot in the field at the Shell Houston Open this week as it will be the final PGA TOUR stop before The Masters being held April 10-13 at the Augusta National Golf Club in Augusta, Ga. This week’s Shell Houston Open will be held at the Golf Club of Houston located in nearby Humble, Texas.

Loupe was twice an Honorable Mention All-American and a two-time First-Team All-SEC performer during a brilliant collegiate career as an LSU tiger from the 2007-08 season through the 2010-11 season.

He becomes the second member of LSU’s talented Class of 2011 to earn a top-10 finish on the PGA TOUR as 2011 NCAA Champion John Peterson also competes with fully-exempt status this season. Peterson earned a pair of top-10 finishes in his first two seasons competing on the PGA TOUR career, including his tie for fourth place in his major championship debut at the 2012 U.S. Open at The Olympic Club in San Francisco, Calif., and a tie for eighth place at the 2013 Zurich Classic of New Orleans held at the TPC Louisiana in Avondale.