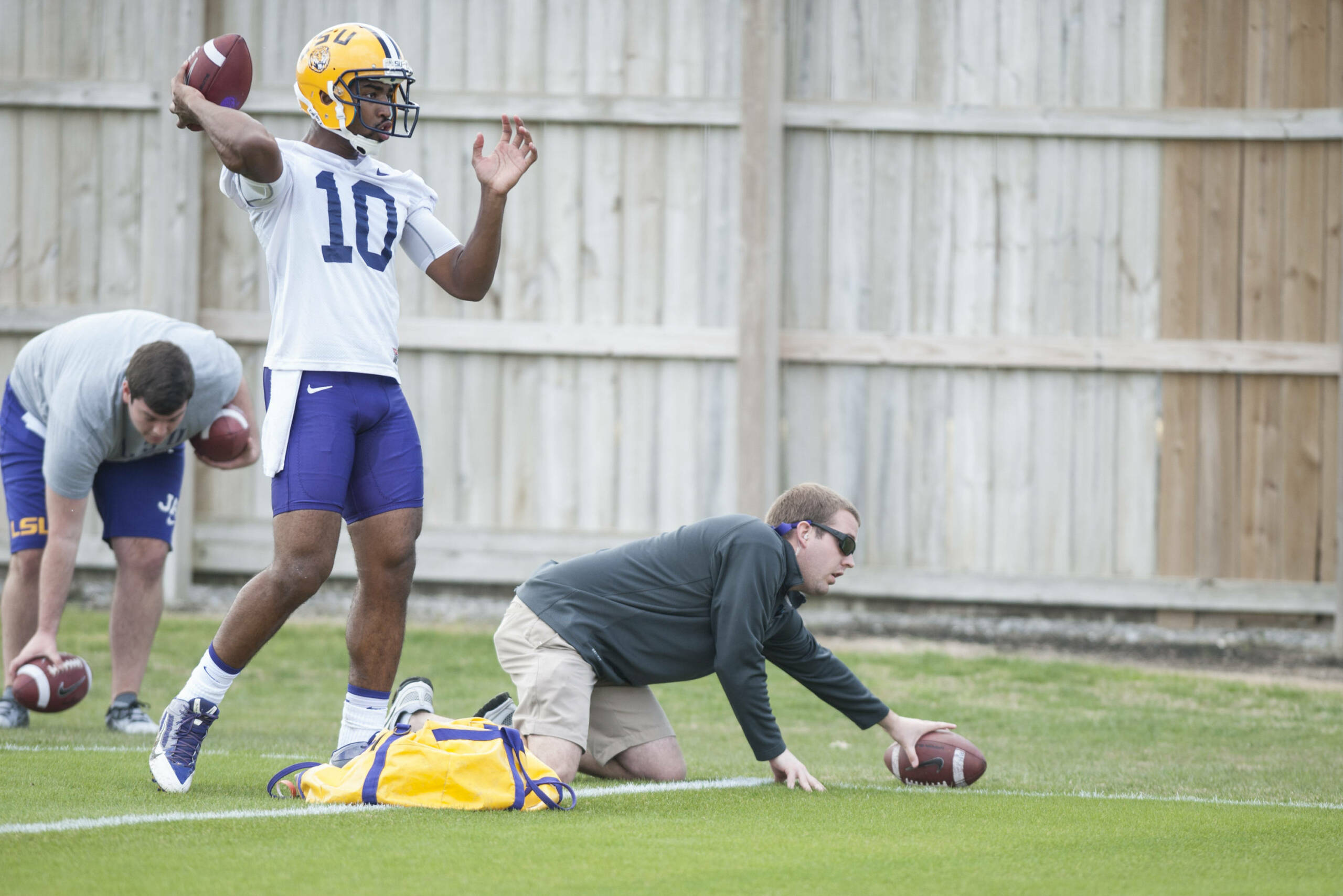 BATON ROUGE – Big plays on both sides of the football highlighted LSU’s second full-scale scrimmage of the spring here Saturday as the Tigers went through a 120-play workout in Tiger Stadium.

Saturday’s scrimmage capped a busy week for the LSU football program as the Tigers practiced three times while also hosting over 600 high school coaches at the annual LSU Football Coaches Clinic on Thursday and Friday.

“We have had a nice week with three really good practices and hosting hundreds of high school coaches on campus for our clinic,” LSU coach Les Miles said on Saturday after the scrimmage. “We had some great speakers at our clinic and having Ray Lewis speak to our coaches and our team was special. He has a unique perspective and for him to share his story with our team really meant a lot. I know it had a tremendous impact on our players and coaching staff.”

Miles said that LSU’s second scrimmage had quarterbacks Anthony Jennings and Brandon Harris both taking snaps with the No. 1 offense as both players continued to show steady improvement. Miles said the Tigers threw for 295 yards in the scrimmage and rushed for another 231 yards.

“It was a very hard-hitting, physical, competitive go,” Mile said. “We didn’t have a rusher go over 100 yards and I think the longest run of the day was a 17-yard game.

“It was a very quality scrimmage and we are continuing to get better. We aren’t ready to play a game yet, but we are much improved. I think the offensive and defensive line have really worked in a competitive manner. You get what you earn and it looked that way today.”

Miles said that senior Kenny Hilliard led all rushers with 57 yards on the ground, followed by Harris with 41 yards and Jennings with 24 yards. Senior Terrence Magee sat out the scrimmage with a minor injury. Miles said Magee will return to action next week.

Miles said that senior Quantavius Leslie led all receivers with four catches for 135 yards, including a 65-yard TD reception. Leslie had a total of three touchdown receptions for the Tiger offense. Sophomore Travin Dural had four catches for 36 yards with a 21-yard score, while redshirt freshman John Diarse had a pair of receptions for 14 yards. Tight end DeSean Smith added one catch for 17 yards.

Defensively, linebacker Kendall Beckwith had six tackles, including two for losses to pace a Tiger unit that forced three turnovers. Beckwith also had a tackle for loss on a goalline situation that prevented a touchdown.

Miles said that safety Ronald Martin had two interceptions and defensive back Rickey Jefferson added another interception for the Tiger defense.

“Our safety position will be manned well,” Miles said. “We are getting go play at that position. I think we made some coverage mistakes today, but we are making progress. We’ll correct those mistakes and get better. Overall, our safeties are improved and our corner play has been good. Tre’Davious (White) and Rashard (Robinson) both played extremely well.”

LSU will practice three times next week capped with the annual National L Club Spring Game on Saturday, April 5 at 1 p.m. in Tiger Stadium. Admission to the spring game is free. The Tigers will also practice on Tuesday and Thursday next week leading up to the spring game.