Blogging From The Berm: Sandra Simmons 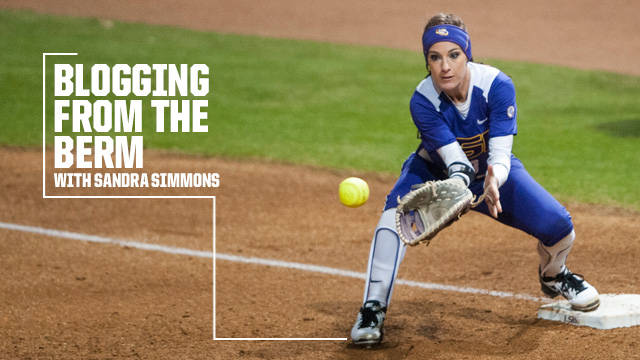 BATON ROUGE, La. – Holding the honors for this week’s Blogging from the Berm series is sophomore first baseman Sandra Simmons, who is playing Alabama for the first time in Tuscaloosa.

Last year Simmons had the game-winning hit in the series opener against the Crimson Tide back in Baton Rouge, as she has started every game for the team this season in her second year with the squad.

I am so excited for this weekend. While this is my second series against Alabama, it will be my first time playing against them in their home stadium. I think we’re all excited to go in tonight and this weekend. I know we are in the second half of our season and the middle of our conference games, and we want to pick up momentum at this point for ourselves. This weekend’s games against Alabama give us the chance to do that, especially with the rivalry that has been built over the last few years.

I really enjoy traveling during conference play. I love being able to experience the different atmospheres at each field and getting to look at how each campus is set up. I love seeing the unique aspects of each campus (how the facilities are set up, how they built and arranged their campus, etc.). For example, coming here for the first time, I never realized how spread out Alabama’s campus feels compared to how close everything feels on our campus. It’s cool to see what other people experience.

I don’t see much of a difference between playing conference games at home or on the road. We are constantly competing against ourselves to play our best game, home or away. I know the rivalry will bring our huge numbers of fans for Alabama this weekend, and while we won’t have as many LSU fans with us as we are accustomed to at home, we know we will have a group of supporters with us here in Tuscaloosa. We’re just trying to play our best game. It doesn’t matter which park we are at.

We are on the back end of the longest road swing of our season. It’s always exciting knowing we are headed back to Tiger Park next weekend to play in our home stadium with our fans, but at the same time we can’t overlook the games that are in front of us. I know we are all excited for this weekend. Though we may be underdogs, we are ready to get back on the field!