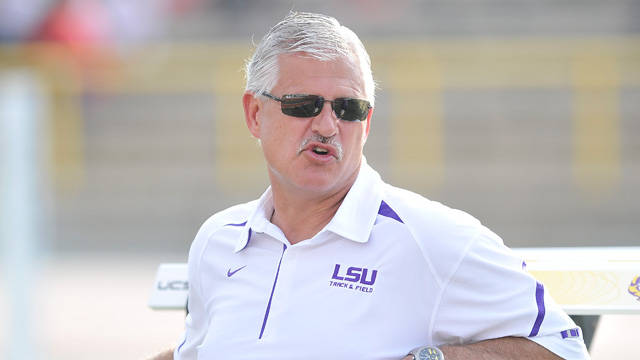 BATON ROUGE – While LSU’s throwers and distance runners opened the 2014 outdoor season at Louisiana Tech’s Jim Mize Invitational last weekend, the Tigers and Lady Tigers will open up in full this weekend with their annual trip to Austin, Texas, to compete at the 87th Clyde Littlefield Texas Relays beginning Thursday at Mike A. Myers Stadium.

While the meet kicks off Wednesday with the start of the multi-events, the Tigers and Lady Tigers will not compete for the first time at this year’s Texas Relays until Thursday with the field events scheduled to begin at 3:30 p.m. CDT followed by the first events on the track at 4:30 p.m. Thursday’s events will run through 7:30 p.m. at Mike A. Myers Stadium.

Friday’s action is set to begin at 9:30 a.m. CDT in the field and 9:35 a.m. on the track, while Saturday’s finale is set for a 10 a.m. start in the field and noon with the first relay finals of the afternoon.

Live results for the 87th Clyde Littlefield Texas Relays can be found online at the official athletics website for the University of Texas at http://www.texassports.com/. Fans can also receive live updates of LSU’s athletes by liking LSU Track & Field on Facebook at http://facebook.com/lsutrackfield and following @LSUTrackField on Twitter at http://twitter.com/lsutrackfield.

As one of the premier attractions of the outdoor season, the Texas Relays provides an early season look at many of the programs that are sure to be in the title hunt at the NCAA Championships in June.

“We look forward to coming back to the Texas Relays each season because we always get a good idea of where we are as a team with a chance to line up against the teams we’ll be competing with in the championship meets,” said LSU head coach Dennis Shaver. “It will be a little bit different for us this year as this is really our season opener outdoors, when typically we have a meet or two under our belts by this stage. We’re going to the Texas Relays this week to get some specific things accomplished with both our teams to propel us into the rest of our outdoor season.”

LSU Track & Field added to its impressive resume of competing at the Texas Relays a season ago with four event wins as they are undoubtedly among the most successful programs in the history of the meet.

Former Lady Tiger national champion sprinter Kimberlyn Duncan defended her Texas Relays crown in the women’s 100-meter dash in her final collegiate appearance at the meet as she became the fourth Lady Tiger of all-time to win back-to-back University titles in the event at the Texas Relays.

The Lady Tigers also walked away with three coveted relay wins a year ago when they defended their Texas Relays titles in both the sprint medley relay with a winning time of 3:43.98 and distance medley relay with an outstanding time of 11:23.55 as they enter this weekend as the two-time defending champions in each event. They also won the 4×800-meter relay for the fourth time in six years with a time of 8:41.25 in 2013.

In addition, LSU’s athletes have won 73 individual event championships in the University division with the Tigers claiming 40 event titles and the Lady Tigers adding 33 event titles in the meet’s history.

After competing at the Texas Relays this weekend, the Tigers and Lady Tigers will return home next weekend to play host to this year’s “Battle on the Bayou” competition that will be held on Saturday, April 5, at Bernie Moore Track Stadium in Baton Rouge. They will then spend Spring Break on South Beach in Miami, Fla., with an appearance at the Hurricane Alumni Invitational being held April 12 at the University of Miami.