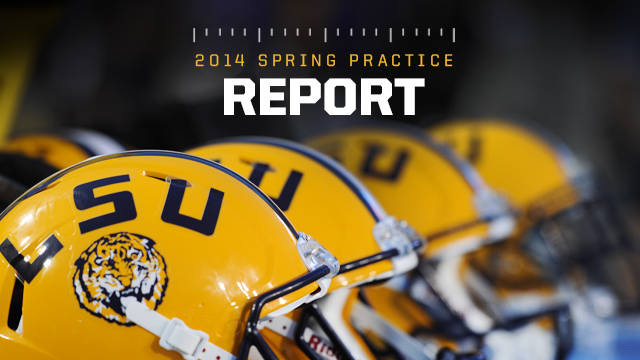 It’s been a busy couple of weeks at LSU, not just with spring practice but also a number of other events around the football program.

The finale to this semester’s practice stretch was Saturday’s annual LSU Spring Game in Tiger Stadium. The rain held off, the weather was cool and fans turned out – as well as former Tigers – to support this year’s team.

While I was standing on the sidelines, I was amazed by the amount of talent I was surrounded by in the stadium.

I also spotted plenty of future NFL talent next to me: Odell Beckham, Jr., Jarvis Landry, Jeremy Hill, Zach Mettenberger and many more.

This is normal for us at LSU. Thanks to the rich football tradition over the past couple decades, it’s normal to be surrounded by some of the best football players and most gifted athletes in the country. It’s a surreal experience to see these guys on a regular basis, and to also see how they interact with each other is a treat. All of these guys are Tigers, and they all share that very unique bond.

I caught up with head coach Les Miles after the game to see what he thought about his team’s performance, the play of the quarterbacks and how it feels to see the amount of talent his team is surrounded by with future and former Tigers on the sidelines.

New Orleans Saints defensive Coordinator Rob Ryan made the trek to Baton Rouge on Saturday to take in the Tigers’ spring game.

Ryan spoke at the annual coaching clinic at the end of March, and I was really excited to listen to his presentation to the coaches. It exceeded my expectations – and made me more of a Saints fan than I already am.

After the game, I asked him if I could get a quick interview with him for the website. His response: “No problem. We will make this fun.”

The NFL coaching veteran talks to me about his relationship with Coach Miles (both were coordinators at Oklahoma State together), the amount of talent in the state of Louisiana and if he sees any Tigers as potential Saints.

On Thursday, the football team hosted its annual LSU Student Appreciation Day, where students were invited to attend the entirety of practice, which included interaction with the staff and players in a handful of games.

Coach Miles and the players also did a meet-and-greet at the end of practice.

I caught up with him following the festivities, and he let me know how the team has progressed, which players stuck out to him this spring and how the recent signees will play a key role on this team come summertime.

LSU senior running back Terrence Magee has played many roles during his football career.

In high school, Magee was a dual-threat quarterback who helped lead Franklinton High to a state title. Since arriving in Baton Rouge, he has spent time at both receiver and running back, hoping to find a permanent home at a position that would put him onto the field.

Last season, Magee’s mark was made as a tailback, where he rushed for over 600 yards and eight touchdowns as a more-than-reliable runner in the Tigers’ ground game.

With Jeremy Hill gone for the NFL Draft, and incoming freshmen Leonard Fournette and Darrel Williams wrapping up their final semester of high school, Magee has gotten the chance to further his role in LSU’s backfield this spring with numbers at a minimum.

“It’s going pretty good,” Magee said. “It’s been kind of rough at times. It’s only me and Kenny Hilliard and we are taking a lot of reps, but I think it is going to pay off for us in the long run.”

With four running backs on scholarship next year, what will Magee’s role – as well as the other three names – be in LSU’s offensive attack, which welcomes new starters at quarterback, wide receiver and running back?

“We really don’t know what our role is yet,” Magee said. “We are still trying to find our way in this offense with Coach Cam and the new quarterback, but I have always been the type of guy willing to do whatever is asked of me.”

“It’s a few wrinkles here and there, but for the most part, our identity as an offense is still going to be the same.”

Magee’s upbeat attitude is one reason the Franklinton native has become so successful over the past year. When leading rusher Jeremy Hill was sidelined for LSU’s season opener against TCU last fall, Magee stepped up to the tune of 95 yards and two touchdowns in the Tigers’ win.

With his strong worth ethic coupled with a ready-to-go attitude, the coaching staff often points to Magee as one of the leaders on the team, both on and off the field.

“I have no choice but to [be a leader],” Magee said. “I am a senior and with that comes a leadership role. Plus, I am on Unity Council now, so it’s my turn to step up and be a leader, which is natural for me, because I have been a leader all my life.”

With Magee and Hilliard taking the reps this spring, the wait for Fournette and Williams to arrive is about more than adding competition into the mix.

“We are limited at the tailback position,” Magee said.  “We are ready for those guys to get here and take some of those reps off our hands.

“Plus, me and Kenny are seniors and before we were in this position we had some older guys mentor us, so we are looking forward to taking those guys under our wing and mentoring them as well.”

Junior Jalen Mills has played a key role in the Tigers’ defensive back unit since he first arrived at LSU as a freshman.

In his first two years, Mills has started every game for the Tigers as a cornerback.

Then came a change, which would keep Mills in the starting rotation, but bring a new role for the veteran.

During the Outback Bowl, defensive coordinator John Chavis told Mills that he would be transitioning to safety.

“Chief has been rotating me in at cornerback and safety [this spring],” Mills said. “He said they wanted to work me in at safety to make the secondary complete.”

Mills brings a wealth of experience to the defensive side of the ball, and his ability to play multiple positions is a big benefit for the Tigers.

“I know the defense in and out,” Mills said. “I mean, even knowing nickel spot from corner to safety. I can play all three positions. I’m just trying to make myself a better player for the team.”

From an impact standpoint, both veterans and younger names are standing out to Mills.

“Ronald [Martin] has been doing really good and we have kind of stepped in and put Dwayne [Thomas] at safety too, and he’s been doing a good job at safety,” he said.

Mills is not only making the move from corner to safety this year, but he’s also transitioning into a leader for the defensive backs unit.

Senior Craig Loston held that position last year, and Mills is ready to step into a similar role as the vocal leader in the secondary.

“That’s a big role,” Mills said. “Those were big shoes to fill. Craig was the leader of the defense, so I am trying to get where he was and then advance myself a little more.”

When it comes to the Tigers’ defense, “D-B-U” is highly regarded. The collective group of defensive backs to come out of LSU has put the Tigers on a different level than other college programs.

To keep up the pace year in and year out is a challenge – but one this group is ready to accept.

“We are just going to try and hold up the standards of DBU that it was in the past and we are going to hold that to the future,” Mills said.

As the spring progresses, Mills’ main goal is – simply put – centered on improving what he brings to the field.

“Getting bigger, stronger, faster,” he said.

The Tigers had their first full scrimmage of the spring on Saturday and improvement was seen on both sides of the ball. Head coach Les Miles was pleased with his team’s performance.

“Let me characterize today by saying that there was improvement in assignment, improvement in snap, cadence and function,” LSU head coach Les Miles said. “It was a much more competitive go, offense and defense. We threw the ball well and rushed the ball well at times. We really defended well, but we did have some missed tackles that allowed the offense to extend drives.”

View the a full recap of Saturday’s scrimmage here.

You can register at http://www.lsucamp.com/ as well as get more information about the clinic.

When senior offensive lineman La’el Collins made the decision to stay at LSU instead of entering the NFL Draft, the Tigers were thrilled. The veteran line would be one of the most experienced units on the team, and the key piece up front would be back protecting the blind side in 2014.

In his last two years, Collins has started all but one game for the Tigers. His presence on the field has made a huge impact on LSU’s chances at success up front, and his decision to return was not only about improving his own skills but also teaching the young guys backing him up.

“Focus on the small things – technique,” Collins said. “Just coming out here and getting better and being a leader to these younger guys. You know, that was the number one reason [to come back].  Just come out here and give great effort.”

No stranger to offseason workouts, Collins said improvements are being made throughout the team after the first six practices of the spring.

“We came out there and got better as an offense and defense,” Collins said. “I think the intensity was really good. Guys came out there focused and ready to go.”

The Baton Rouge native is getting used to one new face this spring in offensive line coach Jeff Grimes, who has already made a positive impact on his top lineman.

“I think he was the key piece for this offense,” Collins said. “I think he is a great offensive line coach. He can help us with anything we need at any position.

“If we have any questions, he always answers those questions and shows us how to get the things right that we need to focus on.”

After suiting up as teammates since high school, Collins had a close relationship with former LSU running back Jeremy Hill. But even with Hill gone for the NFL, Collins has the utmost confidence in the Tigers’ run game moving forward.

“I think the running game is going to be the strength of our offense, because we have veteran running backs,” Collins said. “We have a great offensive line and guys that are back there and ready to go.”

With four returning starters on the offensive line, the Tigers will rely heavily on the men up front in 2014.

“I’m real confident,” Collins said. “We have a lot guy that are hungry; a lot of guys that all believe in the same goal – becoming the toughest offensive line in the country.

“I feel like coming out here each and every day with these guys and focusing on everything we need to focus on, we can get the job done.”

Watch my full interview with La’el Collins below.