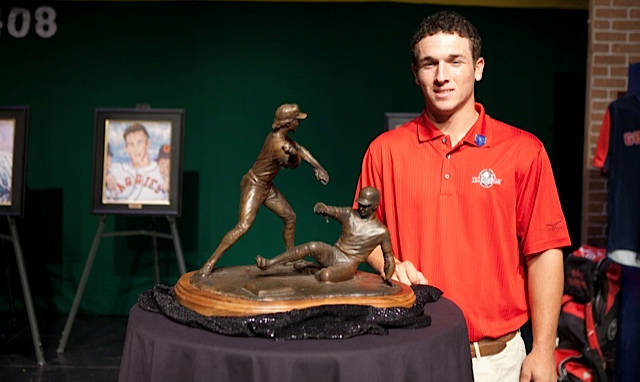 LUBBOCK, Texas — The College Baseball Hall of Fame announced Saturday that LSU freshman Alex Bregman is the winner of the 2013 Brooks Wallace National Shortstop of the Year Award.

Bregman, product of Albuquerque, N.M., batted .369 with 18 doubles, seven triples, six home runs and 52 RBI during the first season of his college career, leading the Tigers to a berth in the College World Series.

“It is such an honor,” Bregman said. “This is a team award and I have to thank all of my great teammates. To have won this award with all the other great shortstops in the country is truly an honor.”

Bregman will be formally presented with the Brooks Wallace Award Saturday night in Lubbock during the College Baseball Hall of Fame’s Night of Champions.

The award, sponsored by Mizuno, is named for Brooks Wallace, a Texas Tech shortstop from 1977-80, who died at age 27 after a battle with leukemia.

“Deciding back in fall practice to name Alex Bregman as our shortstop for 2013 turned out to be the impetus for our LSU team to win  four championships on our way to qualifying for the College World Series in Omaha,” said LSU coach Paul  Mainieri. “He had big shoes to fill in replacing a four-year starter in Austin Nola, and he handled the job with great poise and leadership. He had a tremendous  season in the field, making all the plays you want a shortstop to make, and at the plate as our most consistent hitter and toughest out.

“I’m not really sure what else he could do to contribute to the success of our team than what he did. It’s very exciting to think we have Alex leading the Tigers for another two years in Baton Rouge.”

Bregman is currently playing with the USA Baseball Collegiate National Team during its summer tour, which includes a series of games in Japan.

For more information on the College Baseball Hall of Fame’s Night of Champions, visit www.collegebaseballhall.org.