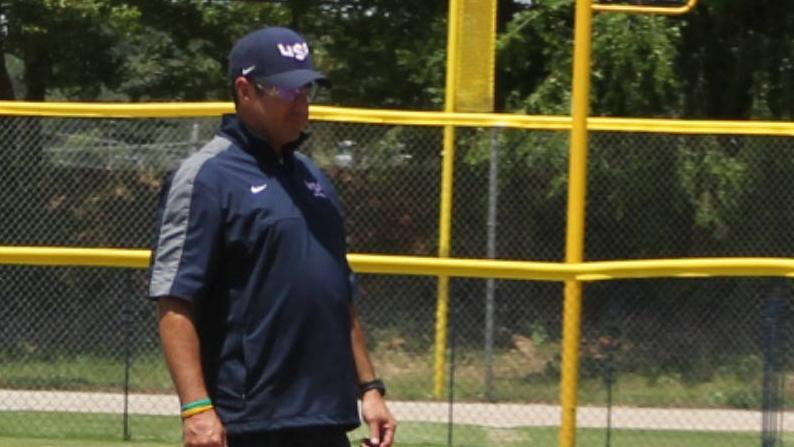 OKLAHOMA CITY, Okla. – LSU softball’s Howard Dobson will return as an assistant coach with the 2013 USA Softball Women’s National Team this summer. It marks the second consecutive season that Dobson will be involved with Team USA.

Earlier this week, Dobson was a part of the three-day selection camp at the ASA of American Hall of Fame Complex held in Oklahoma City where 32 players competed for 18 spots on the final roster which was released Friday.

The USA Women’s National Team will compete in three different events over the next two months in the United States, Canada and Puerto Rico.

Dobson will be with Team USA when they defend their 2012 Gold Medal at the World Cup of Softball VIII, July 11-14, in Oklahoma City. Following the World Cup, Dobson and Team USA will travel to the Canadian Open Fast Pitch International Championship located in Surrey, British Columbia running from July 16-22.

“First off, it’s truly an honor to be involved with the USA Softball Women’s National Team program,” Dobson said. “I’m extremely excited about the opportunity to work with some of the best athletes and coaches in the country. It’s an awesome feeling knowing I’ll get the chance to represent our country during these two events. There’s no greater honor than getting the chance to wear USA across your chest during competition.”

LSU finished its second season under head coach Beth Torina with the program’s 15th 40-win season since softball was reinstated in 1997. The Tigers are slated to return 16 letterwinners sparked by A.J. Andrews, an NFCA All-America Third-Team and All-SEC First-Team selection, along with Bianka Bell and Jacee Blades, a pair of 2013 All-SEC Second-Team picks.

For all of the latest news and information on Tiger softball, visit www.LSUsports.net/softball. Fans can also follow the program on its social media outlets at www.Facebook.com/lsusoftball along with @lsusoftball and @bethtorina on Twitter.