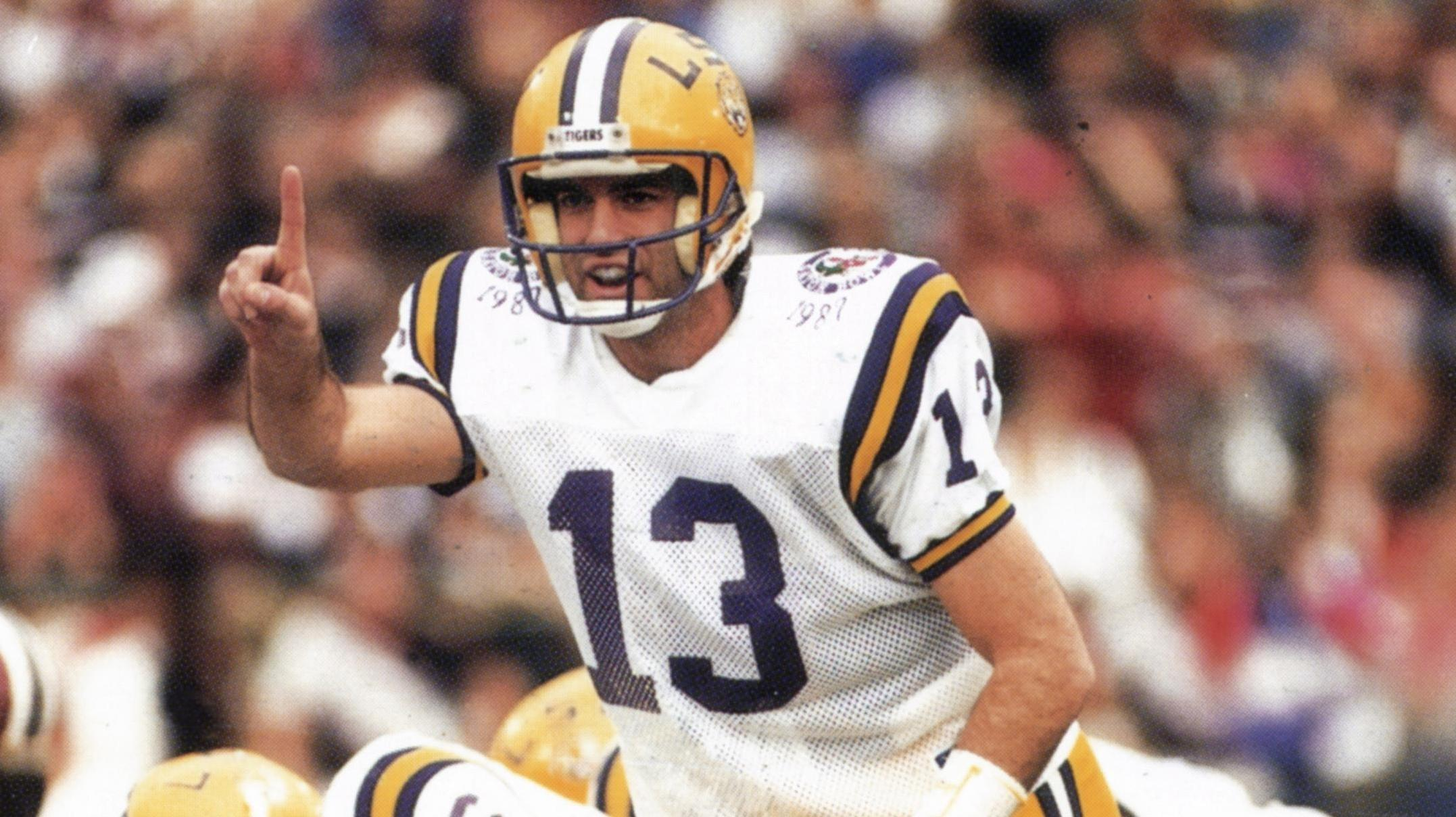 Hodson made Earth move during record-setting career at LSU

The Louisiana Sports Hall of Fame is the home to Super Bowl champions, Olympic gold medalists and Kentucky Derby winners, among its vast collection of legendary figures.

One thing it does not have is someone who caused the Earth to move … until Saturday night, June 29 in Natchitoches, when a transcendent LSU quarterback officially joins the ranks of state sports greats.

Tommy Hodson made a name for himself on the gridiron as a record-setting quarterback at LSU and Central Lafourche High School. He also spent time in the NFL with four different teams, including the New Orleans Saints.

But Hodson will always be remembered for one last-minute play in an Oct. 8, 1988 game between LSU and Auburn. Hodson’s game-winning touchdown pass to Eddie Fuller caused a celebration that resulted in a mini earthquake on LSU’s campus.

That play did more than help LSU pull out a 7-6 win. It forever cemented his place in LSU’s folklore.

Hodson was a record-setting quarterback at LSU, passing for a school and Southeastern Conference record 9,115 yards and 69 touchdowns, and was a Heisman Trophy candidate.

Hodson’s career comes full circle as he will be joining some of the state’s greatest football players, and competitors from a wide variety of sports, as a member of the Louisiana Sports Hall of Fame. It becomes official during a sold-out induction ceremony Saturday, June 29, in Natchitoches on the night after the $23 million Hall of Fame Museum has its Grand Opening.

“It’s very exciting because it is such a big honor,” Hodson said. “I was born and raised in Louisiana and played at Central Lafourche, LSU and even the Saints, so that makes it extra special for me.”

“It’s a great honor when you are inducted into any hall of fame, and he definitely deserves this honor,” Gros said. “He had a super high school and college career, and he even got a chance to play in the pros for quite a few years.”

Before busting onto the national scene at LSU, Hodson emerged as a top quarterback recruit at Central Lafourche. He was known as one of the top high school quarterbacks in Louisiana, passing for 4,361 yards and 36 touchdowns.

Those numbers transpired into success for the Trojans.

As a junior, Hodson helped the Trojans end a 15-year playoff drought, but it was during his senior season that he burst onto the scene. The Trojans rolled to a undefeated regular season and marched to Class 4A state semifinals.

Gros said he knew Hodson had the potential to be a difference maker at quarterback.

“Tommy was the purest quarterback I ever coached,” Gros said. “I even coached at Nicholls (State University), and we never had a quarterback there as pure as he was. He had a great touch, was very sharp and picked up things very easily. He was a pleasure to coach.”

Hodson did more than lead the Central Lafourche football team to the playoffs. He was also one of the top basketball players in the state, averaging 27.4 points per game.

If he had followed his heart instead, basketball may have been Hodson’s sport of choice.

“Growing up, I really wanted to play basketball,” he said. “But as time went on, I was being recruited (for football) by LSU and eventually caught the fever. It worked good, and I couldn’t have asked for a better career at LSU.”

During the late 1980s, Hodson played a big role in LSU’s success on the football field.

After redshirting his freshman season, Hodson went into the 1986 season as the Tigers’ starting quarterback and helped guide the Tigers to the SEC championship and a trip to the Sugar Bowl.

Hodson said he was in the perfect situation as a redshirt freshman at LSU.

“I was a young player on a veteran team,” he said. “I was a role player because we had a lot of playmakers on offense. We were set in a lot of spots, so it was an ideal situation for me. It allowed me to have some success early in my career.”

Hodson’s success didn’t end there as he led the Tigers to a 31-14-1 record and two SEC championships in his LSU career. He also was a first-team All-SEC pick each season.

Mike Archer, who took over as LSU’s head coach for the 1987 season, said Hodson played his best in big games.

“Tommy never changed,” Archer said. “He could be having a bad first half, and his demeanor never changed. He went about being a quarterback and doing what he was supposed to do in the game plan, and he never deviated from that. Most times, it worked out because we were able to get the win.

“His attitude carried over to the entire football team because the guys never panicked and never gave up, and that was a credit to Tommy.”

Solid play on the field helped Hodson earn national recognition. He was a Heisman Trophy candidate in his junior and senior seasons. Hodson said it was an honor just to be considered a candidate for college football’s most prestigious award.

“At LSU, you play against good competition in the Southeastern Conference. If you can become one of the better players in the best conference, you are automatically up for some of those postseason awards,” Hodson said. “I was honored to be considered a Heisman candidate.”

But for all the accolades and lofty statistics, Hodson will always be known for one play in the 1988 showdown against fourth-ranked Auburn known as “The Earthquake Game.”

Neither team could generate much offense in a defensive struggle, as Auburn held a 6-0 lead.

With time running out, Hodson guided the Tigers on a legendary drive. On fourth down, he connected with Fuller on the game-winning touchdown that caused the capacity crowd in Tiger Stadium to erupt in excitement. It was a play LSU ran two snaps earlier, but then, Fuller was out of bounds when he caught the pass.

“I guess I’m thankful the guy running the geology department left the seismograph on because it was able to register the earthquake,” Hodson said. “It’s just adds to the great folklore of LSU football.”

“It was fourth-and-11, and he threw a pass to our tight end Willie Williams on their sideline,” Archer said. “Willie catches the ball 5 yards short of the first down, and he fights his way to get the first down. People don’t remember that play, but if Tommy and Willie don’t execute that play, it never comes down to those last two plays.”

Hodson said that touchdown is one people always want to talk about.

“The story seems like it’s got legs,” he said. “It happened 20-something years ago, but I don’t remember it being that big of a deal a few days after the game. The story has just grown since then, and now, it’s a game everyone talks about. It makes for a good story.”

Hodson’s record-breaking career at LSU made him a top quarterback prospect for the 1990 NFL draft. NFL draft analyst Mike Detillier said he rated Hodson as a second-round pick. The Chicago Bears, New England Patriots and San Francisco 49ers showed the most interest in Hodson.  Detillier said Hodson had the tools to be an NFL quarterback.

“Hodson was a really good college quarterback in an era in which there were a lot of West Coast ‘short pass’ timing passes throughout the league,” Detillier said. “He was a good fit for the NFL. He had put up huge numbers at LSU and he was looked at similar to a Steve Walsh of Miami (Fla.) type quarterback.”

Hodson’s dream of playing in the NFL became a reality when the Patriots selected him in the third round (59th overall). He was the third quarterback selected in the draft behind first-round picks Jeff George and Andre Ware.

Unfortunately for Hodson, he went to one of the worst teams in the NFL, as the Patriots struggled to a 1-15 record. Hodson started the last six games of that season.

Hodson played sparingly the next two seasons with the Patriots. One of those games was against the Saints and former South Lafourche High School quarterback Bobby Hebert, also a member of the Louisiana Sports Hall of Fame. The Saints won, 31-14.

“It’s wild when you think that two guys who grew up 20 miles from each other get to play against one another in an NFL game outside of Boston,” Hodson said. “They had a great team back then and we weren’t a very good team, and they took it to us.”

That game was the final one of his Patriots career, as he suffered a broken thumb in the first quarter but finished the game. Hodson’s Patriots career ended in 1993 when new coach Bill Parcells released him in training camp.

Hodson spent time with the Miami Dolphins and Dallas Cowboys before ending his career as a backup quarterback for the Saints in 1996. During his NFL career, he passed for 1,823 yards and seven touchdowns.

“I still can’t believe today that he couldn’t play in the pros,” Gros said. “He had the talent and could put the ball where it had to be put. His biggest knock was that he could not throw the deep out, but Joe Montana didn’t throw the deep out too well. When you have a talented player, you have to adjust what you do to fit that player. I think he got a bad rap in the pros.”

Although his NFL dreams never materialized, Hodson said he has no regrets.

“I didn’t have the career that I would have dreamed of having, but I got to play six years,” he said. “I have no regrets. I met a lot of great people, and I have friends today from my NFL days.”

Although he is no longer in the NFL, football is still a part of Hodson’s life. Every summer, Hodson works as a camp counselor at the Manning Passing Academy, and he uses what he learned to help quarterbacks in the Baton Rouge area.

Hodson also works with electrical companies at JTH Agencies, a professional manufacturers’ representative agency. He is partners in the company with former LSU quarterback Jamie Howard and Jeff Bievenu.

One thing helped open all of those doors for Hodson — the game of football.

“Sometimes it’s hard to believe that a little boy from Lockport got to play at LSU and in the NFL,” Hodson said. “Sometimes it seems unreal, like a dream.”