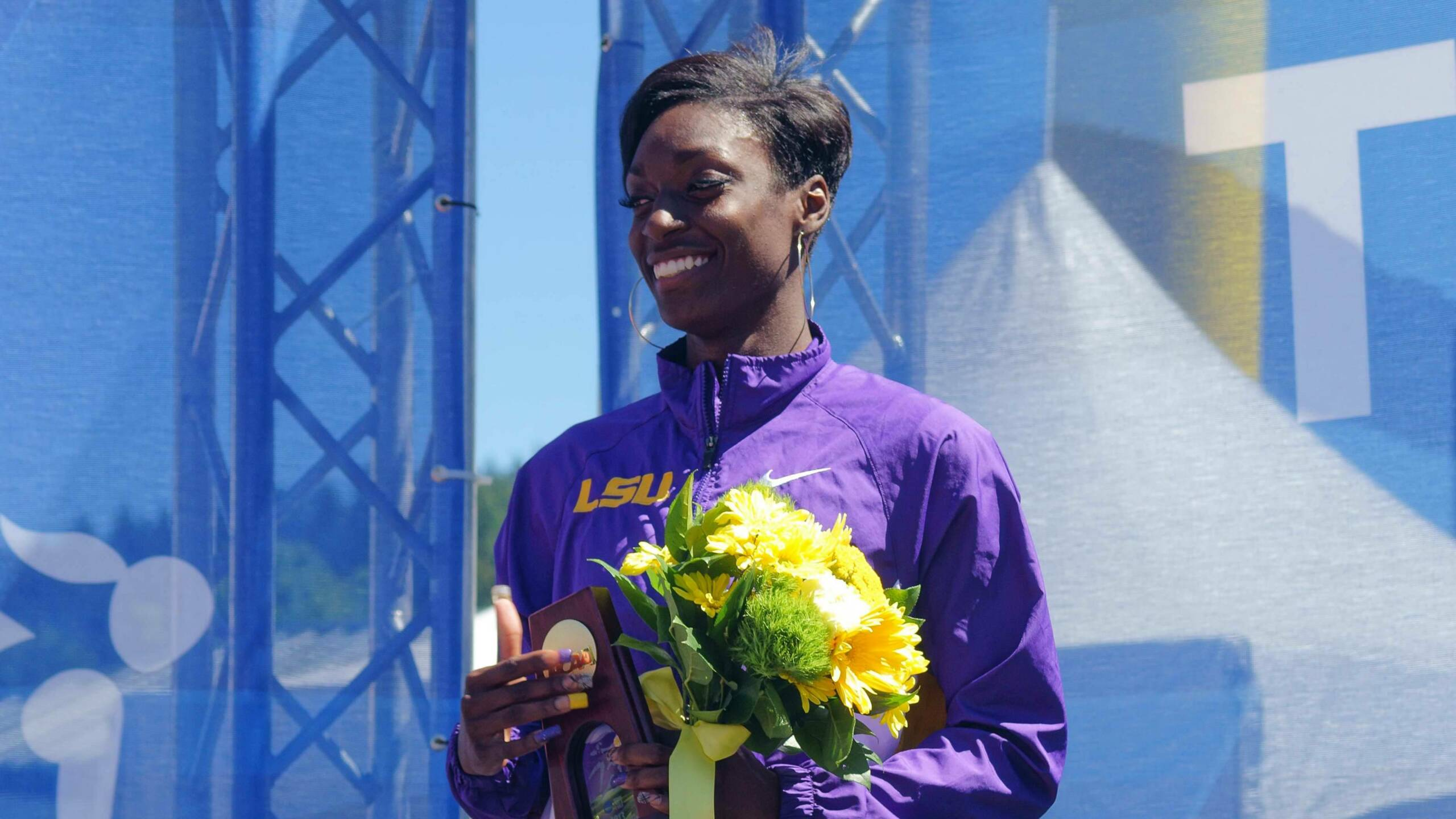 BATON ROUGE – In the wake of a historic senior season with the Lady Tigers in 2013, Kimberlyn Duncan has been named the winner of the coveted Honda Sports Award for collegiate track and field for the second-straight season as the Collegiate Women’s Sports Awards organization made their announcement on Wednesday afternoon.

Duncan is just the fifth repeat winner of the Honda Sports Award for collegiate track and field in the 37-year history of the award after claiming the honor for the first time in 2012.

By winning the Honda Sports Award for track and field this season, Duncan is once again a finalist for the 2013 Honda Cup recognizing the premier women’s athlete across all sports in collegiate athletics. The CWSA will present the Honda Cup live on ESPNU on Monday, June 24, in the Founders Room at the Galen Center at the University of Southern California in Los Angeles.

Duncan, a three-time finalist for the Honda Sports Award for track and field, was chosen as the winner for the second time over Arizona’s Brigetta Barrett, Stanford’s Kori Carter and Kansas’ Andrea Guebelle.

“It’s a great honor to be considered for the Honda Cup, and I just want to thank Collegiate Women’s Sports Awards for their consideration again this year,” Duncan said. “I could’ve never imagined coming so far here in my four years at LSU. I want to thank my coaches, teammates, support staff and, most importantly, my family for their continued support in helping me get to where I am today.

“My time at LSU has really helped prepare me for my next step in life. I’ll continue to work hard to achieve the goals I’ve set for myself after college.”

Wednesday’s selection as the winner of the 2013 Honda Sports Award for track and field strengthens Duncan’s bid to retain The Bowerman trophy she won a year ago as the premier athlete in collegiate track and field by the U.S. Track & Field and Cross Country Coaches Association. The Bowerman is track and field’s equivalent to The Heisman Trophy and is presented annually by the USTFCCCA to the top male and female athletes in the NCAA. Duncan is looking to be named among the three women’s finalists for the third year in a row.

Duncan wrapped up a brilliant collegiate career with a historic performance at the 2013 NCAA Division I Outdoor Track & Field Championships held in Eugene, Ore., this past weekend.

Duncan defended her NCAA Outdoor crown in the women’s 200-meter dash for the third-straight season, becoming the first female sprinter in NCAA history to win three national championships in the event outdoors in a collegiate career. She was also crowned the NCAA Outdoor champion in the event as a sophomore in 2011 and as a junior in 2012.

And she defending her title in stunning fashion by running a career-best wind-aided time of 22.04 seconds in the Saturday’s national final at Hayward Field, matching the fastest 200-meter time under all conditions by a collegiate sprinter in NCAA history. LSU’s Dawn Sowell set the wind-legal collegiate record of 22.04 in at the 1989 NCAA Outdoor Championships held in Provo, Utah.

Duncan set a new indoor PR of 22.54 in defending her SEC Indoor crown to crack the Top 5 of the NCAA’s all-time rankings as the No. 5-ranked 200-meter sprinter indoors in NCAA history.

A native of Katy, Texas, Duncan cemented her legacy as one of the most decorated sprinters in the history of the LSU Track & Field program as a seven-time NCAA event champion, 12-time SEC event champion and 14-time All-American in her four seasons in with the Lady Tigers from 2010-13.

“Kimberlyn is a rare talent,” said LSU head coach Dennis Shaver. “You really can’t put into words what she has meant to our program in the four years she’s been with us at LSU. She has accomplished so many things on the track that no woman in NCAA history has ever done before. That’s a testament to the hard work and dedication she’s shown in reaching this stage of her career, both on and off the track.

“She comes from a great family and has a strong support system behind her, and we know she’ll continue to achieve great things in the future as she pursues a professional career.”

The CWSA presents the Honda Sports Award annually to women athletes in 12 NCAA-sanctioned sports, and each is a finalist for the Collegiate Woman Athlete of the Year and the 2013 Honda Cup. Duncan was elected the winner of the Honda Sports Award for track and field in a vote of coaches from more than 1,000 NCAA member institutions as selected by a panel of track and field experts.