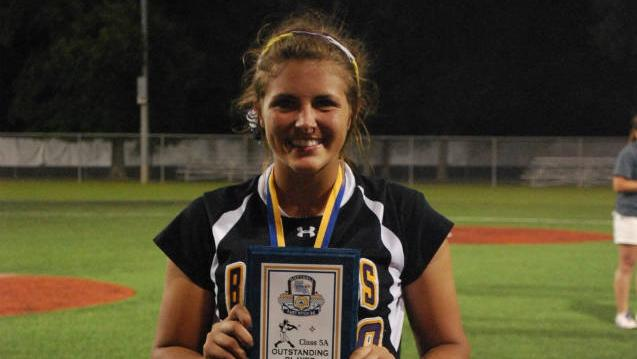 CHICAGO – LSU softball signee Baylee Corbello picked up the 2013 Gatorade Softball Player of the Year award for the state of Louisiana as announced by the Gatorade Company, in collaboration with USA TODAY High School Sports.

It marks the second straight season that Corbello has received the honor. She will join the Tigers as a freshman for the 2014 season and advances as a finalist for the prestigious Gatorade National Softball Player of the Year award announced later this month.

In its 28th year of honoring the nation’s best high school athletes, the Gatorade Company recognizes outstanding athletic excellence, high standards of academic achievement and exemplary character demonstrated on and off the field.

Corbello, a 5-5 pitcher from Lake Charles, fueled her Sam Houston High School to its second consecutive Class 5A state championship this season. An injury prevented Corbello from pitching until late in the season as she won all seven of her decisions in the circle with a sparking 0.32 ERA and 122 strikeouts over 65 innings of work.

Corbello fired back-to-back no hitters to open the state playoffs and racked up 16 Ks in an 8-0 win over Mount Carmel during the state final. At the plate, the two-time Louisiana Sports Writers Association’s Miss Softball recipient turned in a .439 batting average to go along with seven home runs and 36 RBIs.

In the classroom, Corbello has maintained an A average. A devoted member of her church community, she has volunteered at a local women’s shelter. She also has served as a youth softball coach and donated her time with Buddy Ball, which organizes T-ball games for physically challenged children.

The selection process is administered by the Gatorade high school sports leadership team in partnership with USA TODAY High School Sports, which work with top sport-specific experts and a media advisory board of accomplished, veteran prep sports journalists to determine the state winners in each sport.

LSU finished its second season under head coach Beth Torina with the program’s 15th 40-win season since softball was reinstated in 1997. The Tigers are slated to return 16 letterwinners sparked by A.J. Andrews, an NFCA All-America Third-Team and All-SEC First-Team selection, along with Bianka Bell and Jacee Blades, a pair of 2013 All-SEC Second-Team picks.

For all of the latest news and information on Tiger softball, visit www.LSUsports.net/softball. Fans can also follow the program on its social media outlets at www.Facebook.com/lsusoftball along with @lsusoftball and @bethtorina on Twitter.