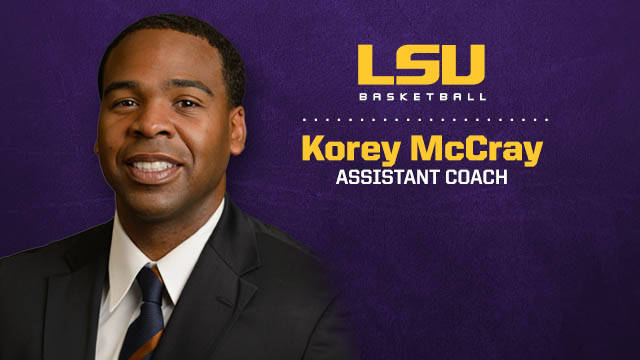 “We are excited about the addition of Coach McCray to the LSU basketball program,” said Coach Jones, who is preparing for his second season as the head coach at LSU. “He will be a tremendous asset for this program in recruiting and his coaching ability on the basketball floor. He will also make a huge impact in the continuing development of our players both on and off the court.”

Prior to taking the job at UCLA, McCray also worked as a skill development trainer since 2004 with some of the NBA’s biggest stars based in Atlanta and surrounding Georgia communities. McCray created tailor-made offseason training programs for players including Dwight Howard, John Wall, Javaris Crittenton, Anthony Morrow, Jarrett Jack, Acie Law, Von Wafer, Mario West and Damien Wilkins, among others.

“I’m thrilled to be an LSU Tiger,” said McCray Tuesday. “I can’t wait to get to Baton Rouge.  I’m so grateful that Coach Jones is giving me this opportunity and I am looking forward to coming in, working hard and representing the University extremely well.”

While at UCLA, McCray helped UCLA land the nation’s No. 1-ranked recruiting class in 2012 (as rated by ESPN.com), an incoming group which was also hailed as the No. 2 class by Scout.com and Rivals.com.  He was part of a staff that won the PAC 12 conference in 2013 and advanced to the NCAA Tournament.

At Chipola, the school lost in the semifinals of the National Junior College Championships.

McCray served as a graduate assistant coach at Florida State for two seasons (2002-04).  During the 2002-03 season, the Seminoles advanced to the National Invitation Tournament (NIT). He earned his master’s degree in adult education with a minor in higher education from Florida State in 2004.

A four-year basketball letter winner at Mercer University, McCray served as the Bears’ team captain in 1999-2000 and 2000-01. He earned a bachelor’s degree in communications from Mercer in 2001 with a major in theatre arts and a minor in Christianity. He remains ranked fourth all-time at the school in assists with 344 and his 113 made three-pointers is tied for 10th at the school for a career.

In addition, McCray served various stints as the CEO and head coach of the Atlanta Celtics since 1999. The Atlanta Celtics is an AAU traveling team that his father, Karl McCray, co-founded in 1990 with Wallace Prather. The non-profit, grassroots basketball program looks to encourage children to make good decisions utilizing the team sport of basketball as a means to teach life-changing skills.

McCray led his 15-and-under team to a national title in 2009. During his tenure with the Atlanta Celtics, he consistently produced teams at all age levels ranked in the top 10, nationally.

The appointment of the 34-year-old McCray, who hails from Decatur, Ga., must be approved by the LSU Board of Supervisors.