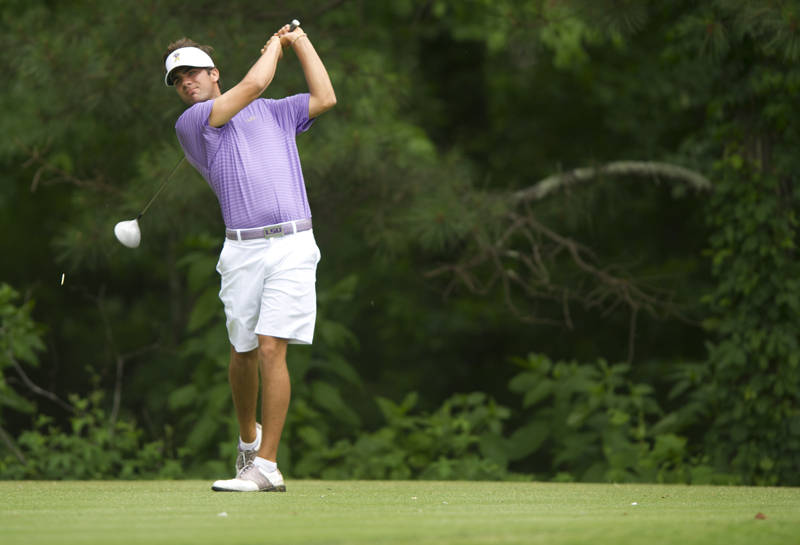 BATON ROUGE – LSU’s All-SEC and all-region performer Curtis Thompson continues to pile up the postseason honors in the wake of his breakout sophomore season with the Tigers in 2012-13 as he recently picked up his first career All-America honor with an honorable mention selection by Golfweek this past weekend.

Thompson has earned Honorable Mention All-America honors from Golfweek as the No. 49-ranked player in the country in the final Golfweek/Sagarin Performance Index for the 2012-13 season.

This marks the fifth-straight season in which an LSU Tiger has garnered All-America recognition with his outstanding performance on the course as Thompson joins the likes of John Peterson (2009, 2010, 2011), Andrew Loupe (2010, 2011) and Sang Yi (2012) as recent selections in leading the Tigers into the NCAA Championships.

A native of Coral Springs, Fla., Thompson has added to an already impressive resume following his sophomore season after claiming his first career First-Team All-SEC honor following the SEC Championships and a PING All-Southeast Region selection as one of the emerging talents in college golf.

While leading the Tigers into the NCAA Division I Men’s Golf Championships for the third time in four seasons, Thompson wrapped up the season as the team’s leading scorer with a career-low 72.9 stroke average with his 13 tournament appearances on the campaign. He also led the team with five top-10 finishes and 10 top-20 finishes in 13 appearances to solidify his All-America candidacy.

Among his best performances of the campaign was a tie for 10th place at the NCAA Baton Rouge Regional where he guided the Tigers to a berth into the NCAA Championships for the third time in four seasons after the squad also qualified in 2010 and 2011. It marked the fifth-straight season in which an LSU golfer has finished in the Top 10 of the leaderboard in NCAA Regional play.

Thompson also won his first collegiate title at the Shoal Creek Intercollegiate during the 2012 fall season by firing a career-low tournament score of 6-under par 210 in 54 holes in the event held in Birmingham, Ala.