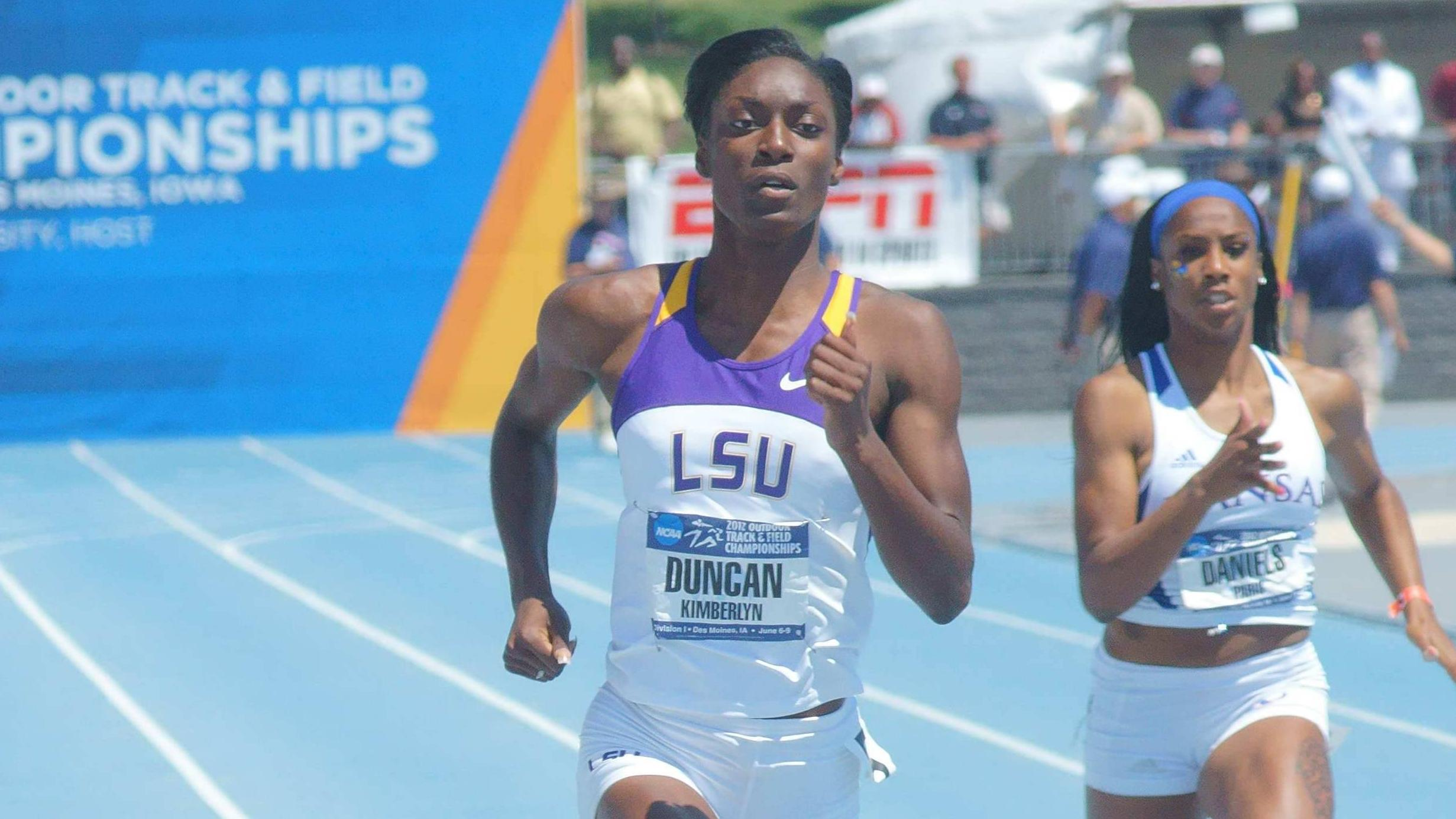 EUGENE, Ore. – Members of the LSU Track & Field program have wrapped up two days of training at historic Hayward Field and are now ready to make their run at a national championship at the 2013 NCAA Division I Outdoor Track & Field Championships beginning Wednesday afternoon on the campus of the University of Oregon.

The NCAA Outdoor Championships return to Hayward Field in Eugene, Ore., for the first time since the 2010 season when both the Tigers and Lady Tigers earned a sixth-place team finish.

The semifinal rounds of this year’s NCAA Division I Outdoor Track & Field Championships are set to begin Wednesday afternoon at 3:30 p.m. CT. Thursday’s action is also slated for a 3:30 p.m. start, while Friday’s action kicks off at 5:15 p.m. and Saturday’s championship finale is scheduled to begin at 2:30 p.m. for the final day of the collegiate season.

ESPNU will air two days of live coverage from Hayward Field this weekend as fans can watch the Tigers and Lady Tigers in action on Friday night from 6:30-9 p.m. CT and Saturday afternoon from 4-6 p.m.

Live results from the semifinal and final rounds of the 2013 NCAA Division I Outdoor Track & Field Championships will be provided by Flash Results and can be found online at http://www.flashresults.com/.

Fans can also receive live updates and behind-the-scenes coverage of the Tigers and Lady Tigers competing throughout the week by liking LSU Track & Field on Facebook and following @LSUTrackField on Twitter.

The Tigers and Lady Tigers will each compete with 12 semifinalists this week after combining for 24 semifinals qualifiers at the NCAA East Preliminary Rounds held on May 23-25 in Greensboro, N.C., in their last meet.

“We’ve treated these last couple of weeks as a seven-day NCAA meet between the two sites, and up next for us is day four here tomorrow on our first day in Oregon,” said LSU head coach Dennis Shaver. “We’re very proud of what our athletes have accomplished to this point in the season. We now have an opportunity to finish strong this week.

“Our sole focus is doing what we need to do as a team tomorrow to give ourselves an opportunity to compete for the rest of the week. We’re going to take each day as it comes throughout the week.”

The Lady Tiger are competing for their first NCAA Outdoor crown since 2008 when they struck gold with their performance at Drake Stadium in Des Moines, Iowa. The Tigers are still in search of their first NCAA Outdoor title since 2002 as they finished just two points shy of winning the men’s team championship with 48 points in a second-place finish in Des Moines to wrap up the 2012 season.

While the Tigers have proven to be the most consistent men’s team nationally over the past 13 years, the Lady Tigers have finishes outside the Top 7 in the team standings just once during that span.

The 2013 NCAA Division I Outdoor Track & Field Championships will witness the end of a truly legendary career as senior Kimberlyn Duncan will step onto the Hayward Field track as a Lady Tiger for the final time.

Duncan, who recently won the SEC Commissioner’s Trophy as the top scoring athlete at the SEC Outdoor Championships in Columbia, Mo., has her sights set on history this week as she has a chance to become the first sprinter in collegiate history – male or female – to win three-straight NCAA Outdoor titles in the 200-meter dash as the two-time defending champion in the event.

After already winning her third-straight NCAA Indoor 200-meter crown earlier this season, Duncan is the national leader once again in the 200 meters with a seasonal best of 22.35 set in tying the meet record at the SEC Outdoor Championships. By sweeping SEC titles in the 100 meters and 200 meters, Duncan tied the LSU career record with 12 career SEC event titles en route to the SEC Commissioner’s Trophy.

Duncan is also an NCAA title contender in the 100-meter dash again this year after finishing as the NCAA silver medalist the last two seasons. Her seasonal-best wind-aided time of 11.05 from the national quarterfinal is the fourth-fastest under all conditions by a collegiate sprinter during the 2013 outdoor season.

Duncan is also just one win away from tying LSU’s career record of seven NCAA event titles that is currently held by Lady Tiger great Muna Lee during her four seasons from 2001-04.

The Tigers also feature their share of firepower in Eugene with the likes of senior Damar Forbes as the NCAA’s leading performer in the long jump and the defending NCAA champion 4×100-meter relay team.

Forbes is looking to snap a streak of four-straight NCAA silver medals in the long jump with his first career national championship as he owns the nation’s top jump under all conditions for 2013 with a  windy 27 feet, 4 ½ inches set in winning his first career SEC crown at the SEC Outdoor meet on May 11. Forbes has already finished as the NCAA runner-up in the event outdoors in 2011 and 2012 and indoors in 2012 and 2013.

Forbes has also led off one of the nation’s most electrifying sprint relay teams throughout the 2013 outdoor season as he has an eye on two NCAA event titles in his final championship as an LSU Tiger.

The Tigers were also crowned the SEC Outdoor champions in the 4×100-meter relay this season after running a seasonal-best time of 38.98 in the conference final on May 12. That performance ranks second among the teams in the sprint relay field this week as the Tigers look to defend their national championship in the event in Eugene.

LSU claimed its eighth NCAA Outdoor title all-time in the men’s 4×100-meter relay a season ago while running 38.38 in the national final. Two Tigers return from that winning club as sophomore Aaron Ernest has run the second leg and junior Shermund Allsop has run the anchor leg this spring. They are joined on the relay by the likes of freshman Nethaneel Mitchell-Blake on the third leg.

Below is the complete list of LSU’s semifinalists scheduled to compete this week at the 2013 NCAA Division I Outdoor Track & Field Championships as the Tigers and Lady Tigers wrap up the 2013 collegiate season.

“We’ve got a great group with us in Eugene. I know we’re all excited about competing for the first time tomorrow afternoon,” Shaver said. “With these fields being cut from 24 to eight on the track and 24 to nine in the field events, it’s just so important for our athletes to compete at the highest level from the very start. They are prepared to do just that.”

LSU’s Qualifiers for the NCAA Championships Semifinals in Eugene, Ore.
Note: All marks are seasonal bests achieved during the 2013 outdoor season